Eating like a local:
Regional food specialties
- The Last of Illinois once popular chili parlors

The extinction of the American chili parlor is near. I'm guessing you can find less than 100 of them left. At one time chili was as American as apple pie. Of course aside from basically Native American cuisine all dishes deemed American have origins elsewhere. I remember reading as a youth that the Aztecs created the dish using the human flesh of their dead enemies as the base in a pot full of chiles. Of course that origin probably isn't true. What is true is that Mexicans, Texans, New Mexicans, and yes Midwesterner's have been chili obsessed for well over a century. What many might not know is chili is pretty big here in the Land of Lincoln. One of the country's biggest chili cook-off's happens yearly down in Springfield attracting competitors from all over. I don't have an exact number but there are still a few chili canning companies in state. Most of them down in Central IL where they not only have their own style of chili but their own spelling of it too. Chilli with two L's. 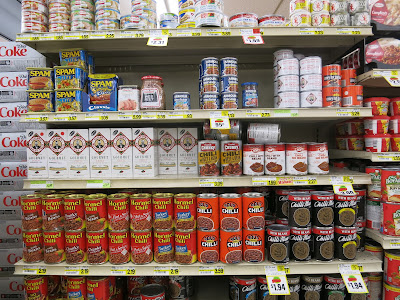 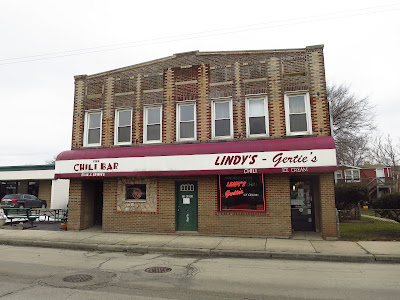 Our first stop up is the only remaining chili parlor within the city of Chicago limits. That said there's multiple locations left. Lindy's Chili has been a part of Chicago's southside since 1924. The original is on 3600 block of Archer in McKinley Park. There's a second old school spot on the 6800 block that's both a chili parlor and a bar. It's the better of the two. Lindy's Chili is reminiscent of a couple long gone Chicago spots I can remember. It reminds me alot of the chili they had at Ramova Grill in Bridgeport and also the chili they served at Demon Dogs in Lincoln Park. I don't know if we should call this Chicago style but there was definitely a similarity in the recipe amongst popular places for chili. It's a smooth blend with little specks of finely ground meat and beans (available without). It's pretty mild but with the addition of some onion, cheese, and macaroni it's comforting on a cold day. In 1974 a local guy who owned Chicago made Gertie's Ice Cream (Since 1901) bought Lindy's and paired the two together. Anyone out there have any memories of going to a local Lindy's as a kid? 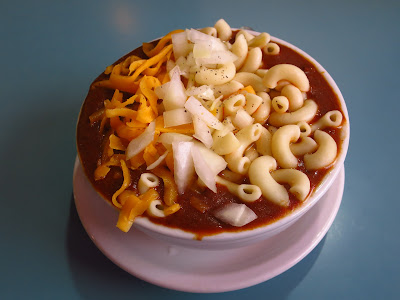 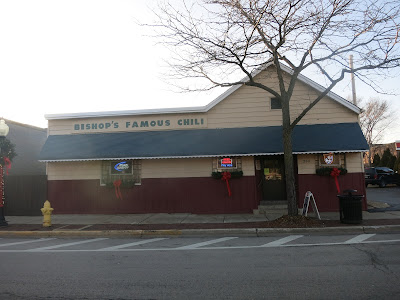 Out west in the suburb of Westmont rests Bishop's Chili. Currently owned by a fourth generation family member of the founder who opened it in 1925 at 18th and Damen Streets on Chicago's west side. According to the website Mary Bishop had been fired from her previous place of employment, a different chili parlor, for changing the recipe. The second generation of Bishop's moved the business out to Forest Park to be closer to home. The Westmont location opened in 1974 and at the time was the third location but today it's the only one left. Bc of it's original Chicago location you wont be surprised to find the chili here to be much like Lindy's and others that are long gone. It too is mild. 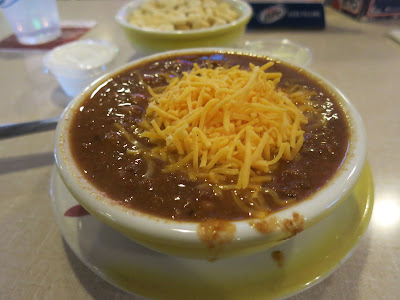 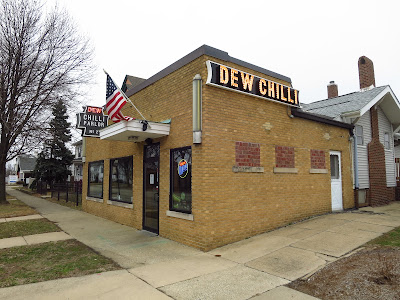 Next stop up is Chilli Country aka Central Illinois. The center of commerce down there is found around the capitol. There was a time when one could find endless chilli parlors around town. Sadly only a few remain. One of them is the Dew Chilli Parlor which traces it's roots back to 1909. I read that they were responsible for implementing the two l's though it was already popular amongst the city's street-side vendors. I've always wished I could go back into time when chili and tamales were served on the streets of America. For a while the original Dew was as close as you could get. The first bowl of red from this now local franchise was served here but the location closed this past summer. I was lucky enough to visit around this time last year and got my fix which is good enough for a few years. More on Central IL style chilli below but let me say this to give you an idea of it. I took a cup of this stuff home and it turned rock solid overnight in the fridge. Hard enough to be used as a weapon in prison. 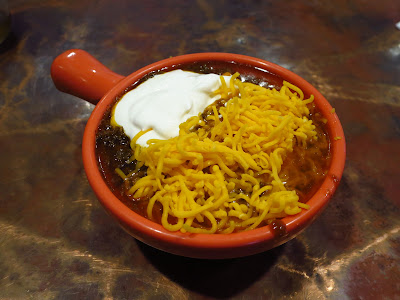 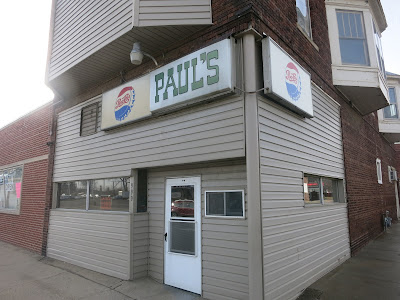 Over in Macon County in the town of Decatur you can find Paul's Confectionery. They've been a neighborhood fixture since they first opened their doors in 1924. They do quite a few things at Paul's but it's the chilli that made them a neighborhood stay. Like most of the chili parlors left Paul's was handed down by the generation. Over time they've added items like thick milkshakes and of course ice cream as the name suggests. I traveled down to Decatur a few years ago and really enjoyed my trip to Paul's. The most glaring characteristic of Central Illinois style "chilli" is the puddle of grease on top of each bowl. This is called oleo oil and as I learned in Robb Walsh's 'The Chili Cookbook' you're supposed to use the crackers served on the side to soak it up. The oil comes from beef tallow used. 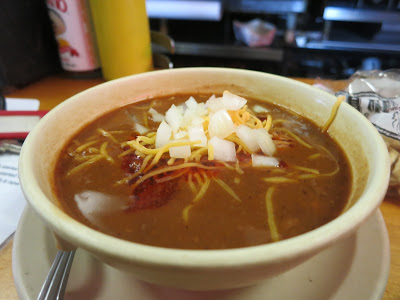 Bowl of Chili at Paul's Confectionery

So what else aside from the little puddle of oleo oil makes Illinois style chili it's own thing? Well there's a recipe for it in the aforementioned Chili Cookbook by Robb Walsh. Aside from the suet you need plenty of ground beef and also red kidney beans. Celery is popular in Midwest chili recipes and is used in this style as well as lots of onions. No canned tomatoes but instead tomato juice. It's a legit recipe for anyone looking and there's plenty of other regional variations in the book that make it worth a buy. The common toppings in Illinois tend to be cheese and onions, and of course crackers. 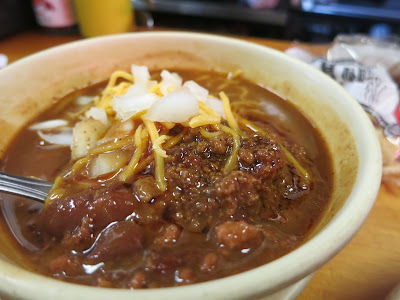 Close up of the chili at Paul's Confectionery

Another popular chili condiment throughout the Midwest is pasta. Be it in spaghetti or macaroni form. Bc this is most associated with Cincinnati style chili which many deem horrible it gets a bad rap. Chili goes great with spaghetti. Then again I'm in the camp that can appreciate Cincy style chili when in Cincy. Just make sure to go to one of the old school spots. Bc like Paul's they all have character that can only come with decades of service. I feel like the ambience is part of what makes the dying American chili parlor so appealing. Paul's makes a fine plate of the combo that is chili and spaghetti. 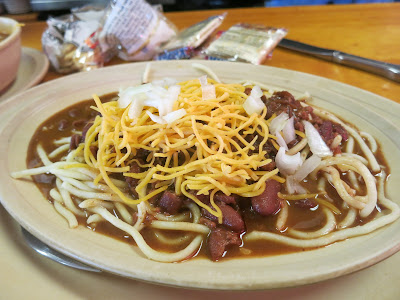 Because Paul's is located in Central Illinois I thought it would be good to also try a burger. Reason being is this is the region where the smashed crispy burger reigns supreme. You can read about the other Central Illinois food specialty HERE. Well this wasn't one of them so I suggest sticking to chili. 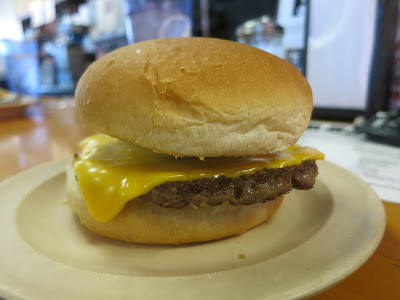 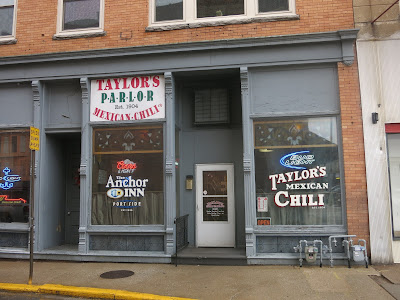 Here's a spot I couldn't wait to visit as soon as it appeared on my radar over at LTHforum years ago. The great Peter Engler aka Rene G had posted about his experience at an old school Mexican chili parlor in the middle of Illinois. To me it was fascinating stuff. What's the reason for it being here? It's not like we're anywhere near the Mexico border. Well according to Robb Walsh's book the founder of Taylor's Mexican Chili worked in the Mexican National Exhibition of the 1904 St. Louis World's Fair. It was at the previous World's Fair in Chicago that chili was said to have taken off in the States. Well one of the people who took a big liking was Charles Taylor who opened Taylor's that same year in 1904. Originally it was attached to the still running Taylor's Mexican Chili factory located a few blocks from the current location which they moved to in 1998. The chili made at the factory is supplied to the parlor. No it doesn't come from the can. It's supplied freshly made. But you can buy cans here too. 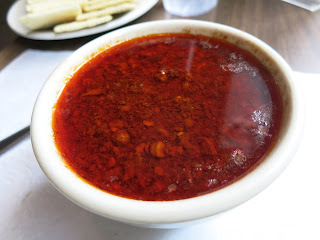 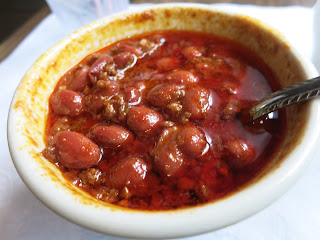 The first thing you notice about the chili at Taylor's (aside from the oleo oil) is it's red, real red. The only other noticeable ingredients are beef and beans. Though there's surely a recipe that's been followed forever. As red as this was I thought it was would taste intensely of chiles but it wasn't as hot as it looks. It was different from all the other spots up above but had some Central Illinois chili traits to it like the layer of oleo oil. Though chili is in the name you don't want to miss out on their butterbean soup which is also canned at the factory. They offer it as is or even better with a splash of chili on top. It's really good. Another popular way to eat the chili not just here but at all the previous spots mentioned is with tamales. Taylor's also makes those at the factory stuffing them with their chili. I imagine the popularity of tamales around the same time as chili also goes back to the World's Fair. Both were popular professions back in the early 20th century but are close to extinct in the 21st. 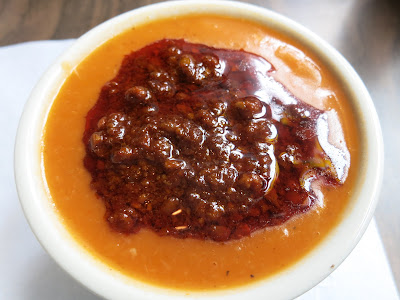 Thanks for sharing this blog with us. These Jackets are really amazing. Harley Davidson depict that we provides one of the best and an unique style Jackets at an affordable cost. Must visit us !!