It's a flash back to the past with this weekends post. Hackney's on Harm's has been a part of the Northern suburb communities since 1939. The little restaurant and bar in Glenview is one of a handful of old school taverns found up that way that are still going strong. It's location across the street from a Forest Preserve and in between some houses reminds me of an old Northwoods establishment. 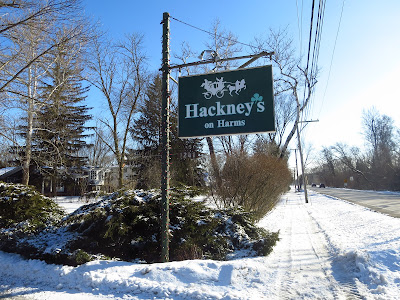 My relationship with Hackney's goes back as far as the 80's with my mom. I remember stopping there once or twice when up North on errands with her. Then it reappeared in my life in late 90's. Back when I was a young Rambler at Loyola Academy. I remember going to their second location on Lake a handful of times during my two year tenure in Wilmette. That space is much larger than the original and bc of it's close proximity to LA it's always been popular for school banquets and such. For those who were previously unaware of Hackney's they have a complete menu of typical bar food favorites but there's two things they bank on. Most every table will have a brick onion loaf as an appetizer. 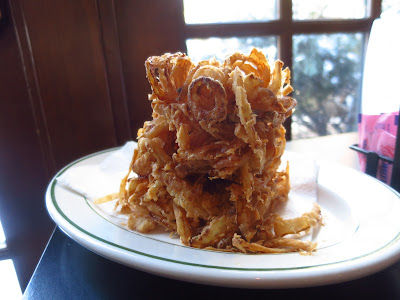 Props to Hackney's for offering their famous fried onion loaf in full, 1/2, and 1/4 sizes. Hackney's basically takes a ton of battered shoestring onions and drops them in the fryer and leaves it to fry as is. This creates what's basically a fried onion brick. A large one can feed a family of 6 so for those that arent dining in with an army by their side I suggest going with the 1/2 for four people and the 1/4 portion if there's just two of you. That said this isnt some life changing recipe. But it is good bar grub. 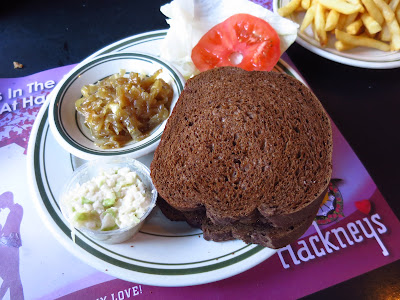 But the real reason that Hackney's on Harms has lasted all these years are the burgers. They have whats unique enough of a recipe that stands out among others due to the use of rye bread as the bun. I don't know if they bake it in house anymore, I doubt they do, but it's still made for them somewhere. Same goes for their ground beef patties which are supplied fresh using a recipe blend that goes back more than 75 years. I like to get mine with cheddar cheese and grilled onions while lettuce, tomato, fries are standard on the side. This is a satisfying hamburger sandwich, it's on bread isn't it? So it's a sandwich. But I wish they would toast the slices of rye slightly so that it held up to the juicy beef a little better. Plus it's a better texture when toasted. You don't have to have your burger on bread but without the rye it's a pretty standard burger in terms of it's appeal. I'm not attached to this place in the same way as those that grew up with it are but I could see why they like it so much. 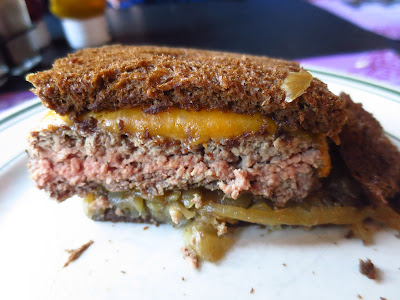 When we lived in Niles we dined at Hackneys in Glenview. Moving near the Wisconsin line I was delighted to find Hackneys in Lake Zurich! They are long gone now but the onion brick lives on in my memories! I never prepare a medium rare burger without the dark rye. Nummy