While putting together my ‘Best of 2018’ post I got hungry for some SE Asian food. So I rolled out to Glenview to try this new Vietnamese buncha specialist on my hit list. Buncha Hanoi is located on Milwaukee avenue in the same strip mall as about four or five Korean chains. It opened late last year. It was featured low key by Nick Kindelsperger at the Tribune during a month long noodles celebration. 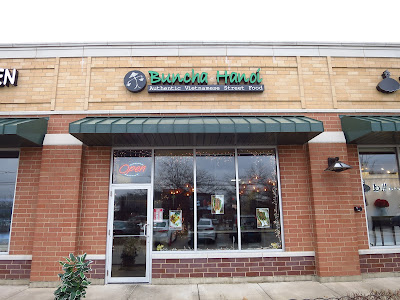 I’m guessing most people reading this have seen the video of Bourdain and Obama eating the regional Vietnamese dish in Hanoi. If not it’s basically a salad of grilled pork and rice noodles with a little bowl of fish sauce laced dipping sauce. Me and my wife had a chance to enjoy this signature Hanoi dish while there. We ate at the same place where Obama joined Bourdain. I talked to one of the young ladies working in Glenview and she said it was their intent to make Buncha as popular as Pho. While they do serve bowls of Pho that's about it as far as the menu goes. They're specialists. 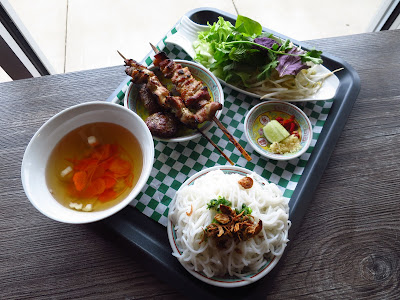 Initial thoughts? Pretty legit. This version might not be as funky as some veterans of this dish might like but they offer two different fish sauces on the side for you to funk it up. I liked the addition of little slivered of fried garlic to the noodles which are always served room temp. The pork was way better than what I remember in Hanoi as far as quality goes. The skewered pork was yakitori like. They grilled it up really nice. Aside from the skewers Buncha also comes with pork patties (and an egg roll here) and they too were done well. Not dry at all. I love seeing a specialist like this pop up and wish them luck. With success others will follow the model of picking one thing and doing it really well. 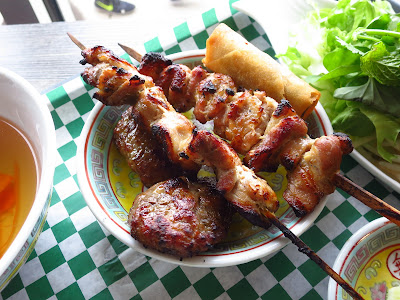 Close-Up of the Grilled Pork

Bad experience with Buncha Hanoi owner, her name is Tina!
First this restaurant have poor hygienic conditions how was mentioned and another customers before, the meat is garbage, look in her Kitchen to see how dirt is there ! Look at this broken garbage plate!!!!
Second, the owner is a ….women, she likes to flirt with a married men…she like to destroy the marriages, families with kids…. it's a shame to be such a restaurant boss….shame on you TINA!
she does this with all the men who step on the restaurant
She name me bitch on the phone when I ask her what she’s doing with my husband at the restaurant ….
Let everyone know what kind of woman she is TINA!
Don’t go and spend money to this poor women ! SHAME ON YOU LYING WOMEN!

I am Vietnamese, Bun Cha is very popular in our country. It's both delicious and cheap, eaten everywhere. It's great to see people in the US enjoying it.