With the sub-artic temperatures in town today seemed like a good day to spread the word on Champon Noodle soup. More on it in a minute bc first I have to introduce you to Umacamon Japanese Kitchen out in Rolling Meadows. I found this spot a year or two ago while searching for Japanese food in the area. We may not have as rich of a Japanese scene as NYC and parts of Southern California but if you head out to the NW suburbs you'll find a few gems. Umacamon is probably the least known of them all. To my knowledge they've never been featured in any articles or lists that I'm aware of. It's not frequented solely by Japanese people but they definitely make up for at least half of the customer base. The other half I assume is from the area and learned of it by things like yelping and driving by. The food here is an ode to Kyushu, the southwestern most of Japan’s main islands. 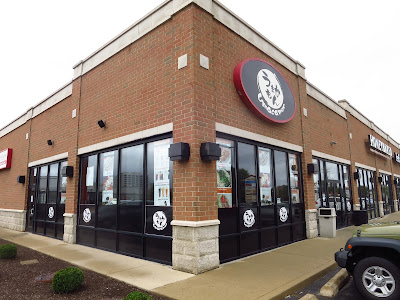 Umacamon has different menus for both lunch and dinner. Obviously some of it overlaps but at lunch you walk up and order from the counter from the lunch menu. Whereas at dinner you'll be seated and offered a dinner menu and then updated on any specials which at times can be by the handful. Umacamon is the baby of two locals who worked together in the food distribution business before deciding to live out their dreams of bringing even more Japanese food to the area. So in 2015 they set out to find a spot and did so in a strip mall just 5 minutes from Mitsuwa Market. I wont gauge a Japanese restaurant by the gyoza. To be honest you're lucky if they're just pretty good. Never great, which is the case here. Though pretty good is as good as I've had in a restaurant until I get to Japan. 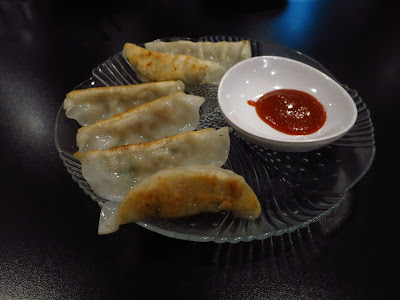 One of the specials that's pretty popular with them Yelpers is the weekend fried tuna plate. We tried that one weekend night we made it out there. I guess I had forgot that fried tuna isn't one of my favorites. In fact I'm not much of a fan for cooked tuna at all. I think there's endless options of fish that are better for frying. Though this was better than all other variations I've tried bc they managed to keep the middle slightly raw which made for a nice surprise inside. Order this if your group is larger than 2-3 people. It's alot of fish so if it makes for a good appetizer for a group, but not a small one. 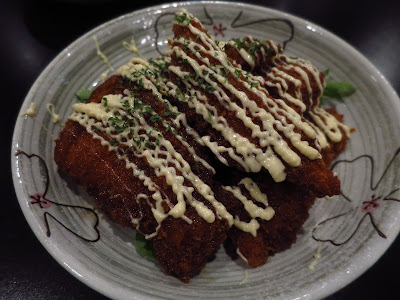 A better option if you want something fried is the pork tonkatsu. It's a very good example of the Japanese version of the breaded pork tenderloin. This too is good for a group as they slice it traditionally which allows for individual pieces to be passed around. Super solid with some Sapporo. 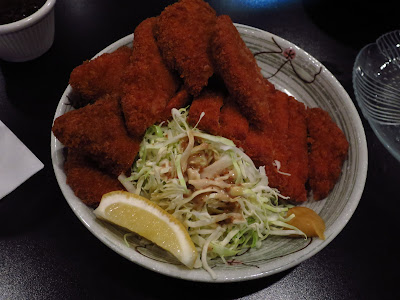 They also have a yakitori grill. Though truth be told you're better off going to Yakitori Boogytori down the road. Still though what's nice about Umacamon is you can get a whole lot more other than just Yakitori. I liked the tail meat skewer alot but thought the thigh meat was average at best. 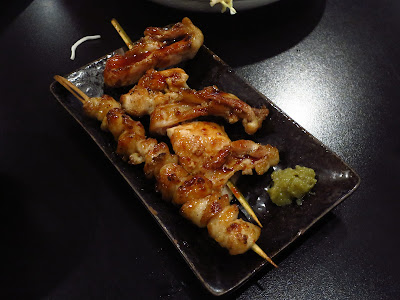 At this point you may be asking well what's so great about this place? One of the answers is a dish I don't have a good pic of though I highly recommend the omelette with beef gravy aka Omurice. It's an omelette stuffed with Japanese tomato rice and covered with a beefy demiglace. The other item here I would recommend is their signature bowl of Champon Noodle Soup seen below. As I learned from an old article in LA Weekly - "In 1899, a Chinese immigrant to Nagasaki, Japan, set up a noodle shop called Shikairo along the city’s harbor to feed his fellow expatriates. Heijun Chin, a native of China’s Fujian province, had created a variant of ramen in which ingredients are stir-fried in a wok, a chicken-pork broth is added, and finally noodles are cooked, all together in the wok. Its name, champon, is derived from the Hokkien phrase “to eat” or chiah png." - Link to that story HERE. 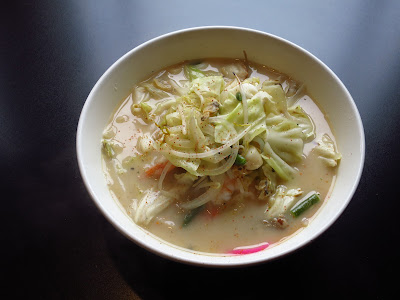 This is why you drive out here. At least it's why I do. I love learning about regional dishes such as this. Champon Noodle soup is something anyone from Nagasaki has a favorite version of. Typically it's made as described by LA Weekly up above. Though of course exact recipes can vary. I feel like the team at Umacamon uses the seafood in the soup to make the broth itself. It's got delicious notes of shrimp, mussels, and squid. All of which are in the soup itself. Sometimes the pork can be too tough bc I think it's the same meat used to make the fantastic broth. Add in some noodles for slurping and some cabbage for some crunch and you got all of the elements that people want in a hearty bowl of soup. It's not quite ramen but it's better than most of the ramen found around town. 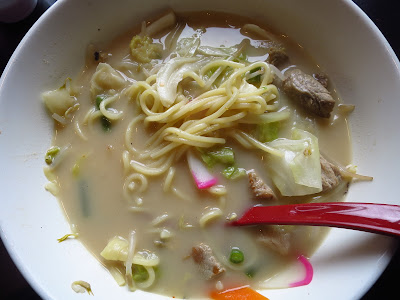 Closeup of the Champon Noodle Soup