There were alot of great low key neighborhood openings in 2018. I'm using January of 2019 to share all the spots I didn't get to post about last year. Finom Coffee opened towards the end of 2018. They did so in what was a vacant building that had historic status attached to it. The building was built in 1889 and for a while was a popular tavern called the Whistle Stop Inn. Finom has turned the building into a neighborhood coffee shop that doubles as a bookstore and also serves food. The cuisine of choice is Hungarian. Something that until now was pretty much extinct in these parts. Let's roll. 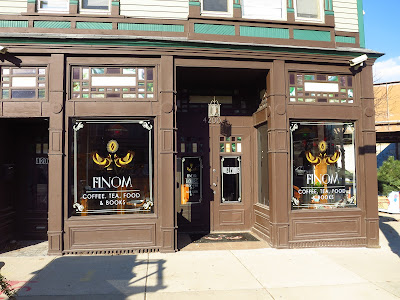 Walking into Finom feels like you're transporting yourself overseas. I could easily see this place in Budapest which I traveled to a couple years ago. They did a great job with the interior. It's a place you want to sit back and relax at. It almost has the feel of a nice hunting cabin with the taxidermy on the walls. I'd read in the Tribune that quite a few local businesses such as Marz Brewing and Kimski helped with some of the interior design. Finom is off to a hot start. Aside from being featured in the Trib they were also the second newest restaurant in the Fooditor 99. Hungry Hound also stopped by. 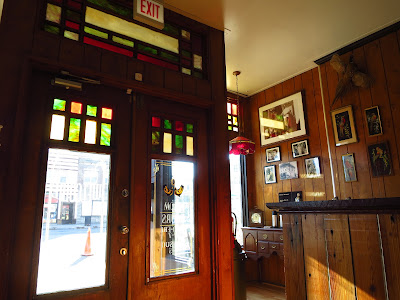 You probably don't recall any round-ups on coffee shops featured over here. That's bc I don't drink coffee. What you see below is the Choco spice which is a hot chocolate drink with a very floral taste. 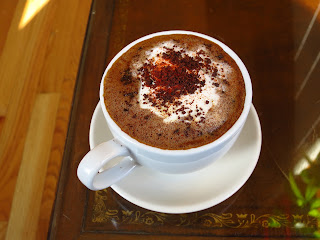 What got me interested in Finom was the food. As I read in the Trib 'Finom' means delicious in the native Hungarian language. The menu is small with maybe 5 or 6 items making it up. I haven't had all of them but I've really enjoyed everything I've tried thus far. Particularly the Lecso which is a thick medley of tomatoes, gypsy peppers, paprika mixed with Hungarian sausage and topped with a fried egg with a soft yolk. It's served in a cute little Le Creuset pan with some slices of bread on the side. Though it's described as a stew this is more like a ratatouille. It was as if a recipe for gumbo stopped right after the andouille goes into the pot with the Holy Trinity and spices. I really liked this dish. 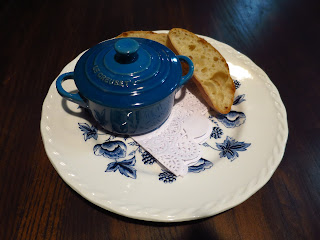 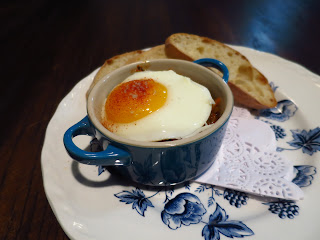 Another great snack if you're in there doing work is the Pick salami sandwich. This is made with some fantastic ciabatta bread, Hungarian Pick salami (a brand), housemade cultured butter, sliced gypsy pepper and Hungarian Swiss cheese. This one really hit the spot. I think it was the butter. 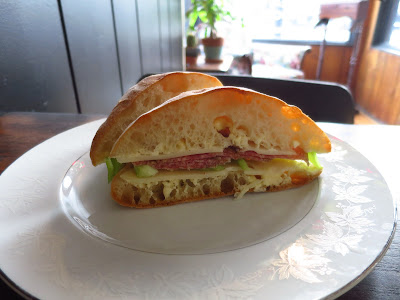 Last of the dishes I've tried is the classic known as Goulash. Or Hungarian Goulash if you're located outside of Hungary. Except on the menu it's called Gulyásleves. Nonetheless when you read the description it's exactly what goulash is described as. The dominant flavor in this is paprika which is where the red color comes from. Tender pieces of beef are joined by parsnips, carrot, potatoes, gypsy peppers, onion, and dumplings. It's a pretty soupy rendition to the point where it almost tastes like a perfectly made beef and vegetable soup. I actually had this just recently during that mini cold streak and it was just what I wanted as far as lunch on a cold winter day. Count me amongst the early fans! 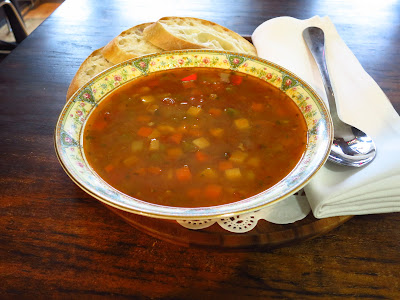