I never did make it over to Snaggletooth when it was open and generating tons of buzz. The acclaimed house cured fish is no longer available now that they closed for good. But Chicago's loss is Chicago's gain. When Snaggletooth closed that left Chef Jennifer Kim without work. Well now she's back with her own place in Andersonville. Passerotto is Chef Kim's self described "fun" Korean spot. 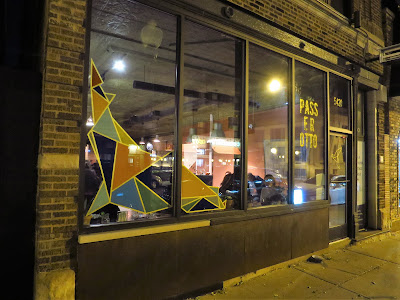 Chef Jennifer Kim is a Chicago restaurant vet who has bounced around at a few different spots. One of those places was Nico Osteria - the Italian joint from One Off Hospitality. She's Korean American but I believe this is her first stint cooking Korean for the masses. Only thing is it's not your typical Koran and that's bc there's slight influence of Italian to be found too. Just don't use the fusion word bc chef's hate it for some reason. These day's fusion has taken on new meaning by which I mean many who are practicing the art of mixing two cuisines are doing so in a inventive and respectful way. Fusion was given a bad rap in the 1980's when California chefs started calling Frankenstein dishes such. But more on that in a bit. Passerotto has a raw menu section for those that miss Snaggletooth. 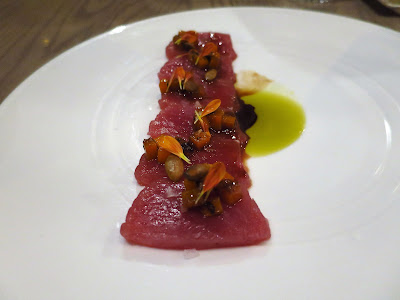 Both of the items we ordered from the four raw options were awesome. Not sure which one I liked more but I'll have to give the edge to the tuna bc it's tuna. But the scallops in XO sauce a close 2nd. 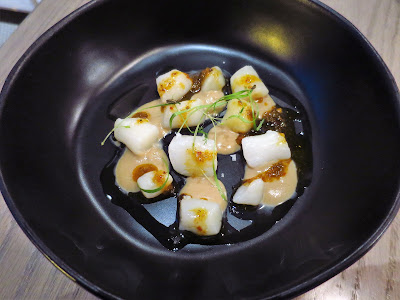 The menu is small so each section is as well. We tried a sunchoke dish which seems to be a popular ingredient in restaurants these days. The knobby root vegetable isn't easy to cook with but chefs love it's sweet and nutty flavors. I'm not even sure which continent inspired this dish below but it was really good. Probably Italy as the sunchokes sat atop a very risotto like concoction. A damn good dish. 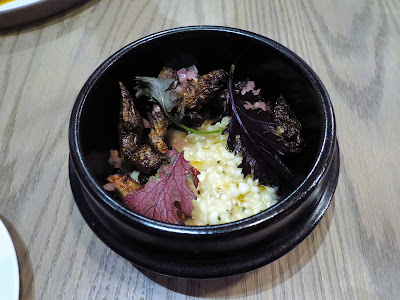 My favorite bite of the night was of course the dish that was most Korean-Italian of them all. They take rice cakes and pan fry them until they're nice and browned and then cover them in an extremely flavorful lamb ragu made from lambs neck. Some Parmesan is shaved on top of the hot ragu which allows it melt a bit upon contact. I absolutely loved this. One of my favorites plates of the year in fact. 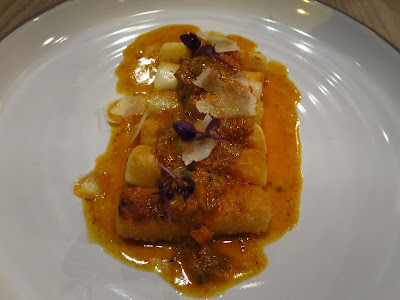 If not for the wonderful dish up above the next one up would've easily been my favorite. Both will make it onto my year end best list. If I see dumplings on the menu I'm trying them so an order of King Mandu was in store. I wasn't sure what Kare was but quickly learned it's the Korean word for curry. As soon as I tasted these they reminded me of Japanese curry which is popular in Korea. Both cuisines have influenced each other for a long time. These were very well made as the wrapper scored a 9 out of 10 in my book which isn't an easy accomplishment. I'm very picky about dumpling skins but there wasn't much to pick at with these. Inside the beef was abundant and perfectly complimented by the little puddle of curry sauce the dumplings were sitting in. Just wonderful. Get them while you can. 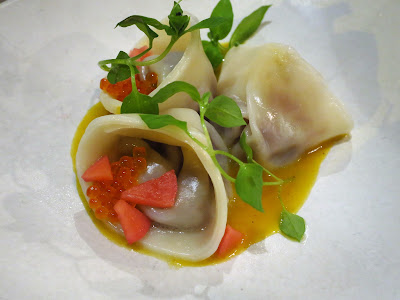 For our main entree we didn't really have a choice. She doesn't love beef so we go the soodubu over the Kalbi short rib. Honestly I left wishing I got the rib but I wasn't too upset bc I already planned on coming back before this dish arrived. Described by our terrific waiter as a Korean Cioppino which was a good sell. I liked the sound of the San Francisco seafood tomato stew mixed with soondubu which is a popular Korean tofu stew which is also very red in color but that's mostly from kimchi and seasoning. On the side was a five pack of banchan that was really well done. The mashed potatoes in particular. It's not that this dish wasn't good bc we ate it all up I just wish the broth had stronger seafood tastes. Or at least kimchi. I thought it was a bit subtle. Still you could tell this had potential. Bc of my love for trying out new to me spots I don't get to go back everywhere right away but Passerotto is the type of place I will try to get to a few times a year so I can see what's new. 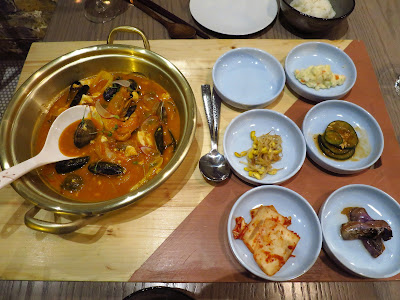