Has anyone ever looked into the history of the steak sandwich in Logan Square? It's not something I'm aware of if so. What I do know is that the steak sandwich is very popular in the neighborhood. There's long gone spots like Cafeteria Marianao where they served a Cuban steak sandwich and then there's places still around like Tropicuba, El Cubanito, and Cafeteria Marcela's. While there's a high concentration of them to be found in Logan Square they're certainly not limited to just there nor are they exclusively sold by Cuban establishments. Today's stop is in Logan Square but it isn't a Cuban restaurant. Rosaisela Tacos Y Mas is a Puerto Rican joint that opened a few years ago on Fullerton. 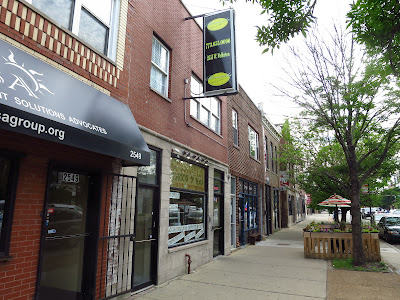 Before we get to the sandwiches they have tacos in their name so of course that was my original intent for stopping in. It was a couple years ago but I liked the chicken milanese taco very much. This from the now defunct Chicago Taco Tour Website - "They take a breaded chicken breast and fry it to order. It's then sliced up and placed into a tortilla rubbed with refried beans and rice which helps hold it all together. It's topped off with avocado salsa and cilantro. I thought this was a really well made snack. More places should serve them like this." Online reviews seem to agree about the tacos. 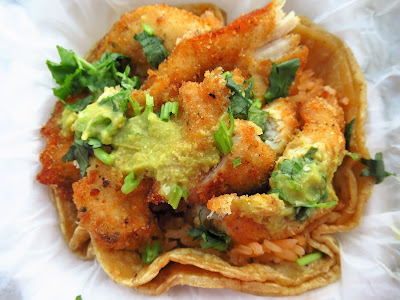 Then there's the steak sandwich. Lots of online love for that too. As there should be. It' also very well made. They take chopped up steak which is probably the same stuff used in the tacos and fry up some onions alongside it before melting in the typical white processed cheese used to make this style of sandwich. It's not the same without it. Lettuce, tomato, and a bit of mayo are the other condiments that round this sandwich out. It's a little different than the others but just as good in terms of satisfaction. I like to call these Cuban/ Puerto Rican sandwiches "Logan Square Style Steak Sandwiches" bc they're common around the 'hood. Add an egg and they make a great breakfast. 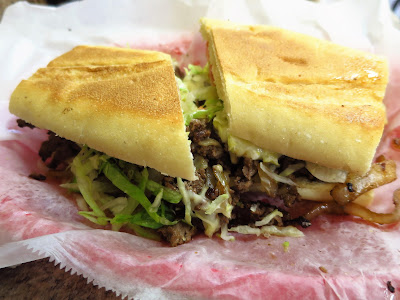