You can pretty much get any type of food you want in Chicago. That said there's thing's we're better at than others and one of the things what makes traveling so much fun is getting to try new foods. So while I've noticed a steady increase in Turkish restaurants opening up in Chicago it will probably never be on the level of Istanbul or Berlin when it comes to good Turkish food. Both of those spots are places high on my travel bucketlist in big part do to the food. But in the meantime I'm happy to have Cafe Istanbul as a Chicago option. It opened this past summer on Clark in a space that's been bad for previous tenants both of which I visited. So far it looks like they've been welcomed by their neighbors. 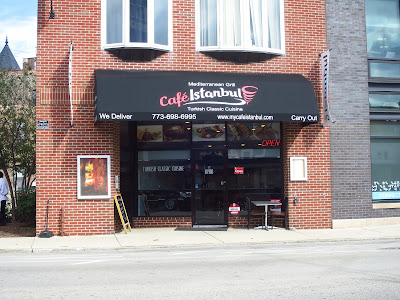 I read somewhere that this is the brainchild of a few Chicago area Turkish people with experience in the restaurant industry. They're planning on turning Cafe Istanbul into a brand and there's already a second location coming to the strip mall at Division and Damen. Turkish cuisine is one of the more interesting ones out there. It's both rich and diverse. There is no set dish that makes for the signature of the cuisine. In fact one of the most popular Turkish dishes - Doner - became big in Berlin which is where you'll find the largest population of Turkish people outside of Turkey. For me the thing that makes Turkish cuisine so appealing is their love of grilling. Whether be it by a vertical spit roasting stacked meat or over hot beds of coal for kebabs and vegetables. The Turkish are masters of cooking with fire. I'd read Cafe Istanbul was using charcoal but that wasn't the case when I entered. So instead of getting some fire roasted kebabs I went with Doner. The large cones of meat are evident. 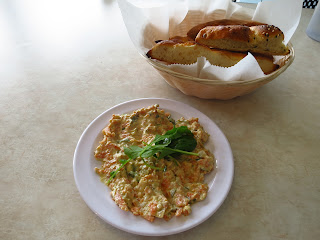 The Doner plate will set you back close to $20 which seems a bit excessive however it's easily enough to feed two people so it's more like $10/serving you just have to order two servings worth. Though you could also get a sandwich which would save you $5 but wont be nearly as much food. I dined in and was given a starter of what I think was a carrot dip called Yoğurtlu Havuç and also some fresh baked bread. Both were really good. The Turkish are masters at baking bread. They're also masters of spit roasted meats and you have a choice of either lamb and veal or chicken. The cones of doner meat tend to be about twice the size of the normal gyro cones Chicagoan's are used to seeing. That's the case here where they're at least a few feet tall. The meat is sliced to order from the cone. 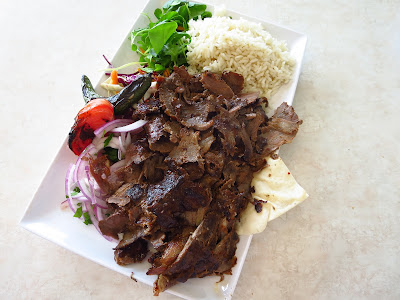 As you can see in the picture above there's a small mound of sliced spit roasted meat on that plate alongside a few scoops of rice, raw onion, and charred pepper and tomatoes. Beneath the meat is a flat bread pita that soaks up all the juices of the lamb and veal. It's a heaping plate of food that will get your taste buds tingling as soon as you smell it. I liked it alot. One of the benefits of having that tall spit of meat is lots of it gets nicely browned while it circles around and cooks. Each piece of doner was really well crisped which is just the way I like it. Some pieces were dryer than others but that was about the only complaint I had. Maybe a couple more tomatoes and house made hot sauces would be nice. Also the piece of Kazandibi (Caramelized Milk Pudding) I received from the sweet lady running the tables was delicious. I'm not sure if that's included or it was a nice gesture by her. 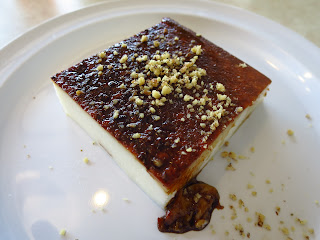