About four or five years ago hip American cities were flooded with Nashville style Hot Chicken options. About three years later that trend made it's way into the suburbs. Which is where we find Fry the Coop. Located on 95th street in Oak Lawn they recently opened a second location in Elmhurst. 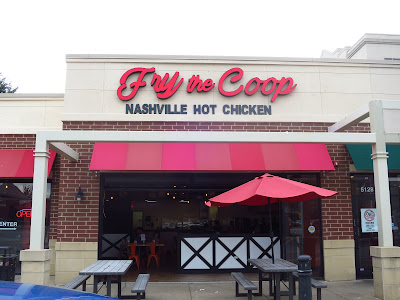 Fry the Coop has taken one thing, the chicken sandwich, and made it their specialty. You don't have a choice of a 1/4 chicken or half bc the only thing you'll be asked is how hot you want your sandwich. That's where the Nashville Hot Chicken comes in. I believe they offer five different levels of heat and from what I've heard the hot ones are legitimately hot just like it should be. I opted for a chicken and cheese sandwich with just the second level of heat. I'm not the biggest Nashville hot fan out there. I like it but only when it's just hot enough to tingle your tongue for a few seconds. Fry the Coop uses breast meat for both the sandwiches and it's tenders. While I prefer thigh meat nine times out of ten I actually like breast meat in my fried chicken sandwiches. I have to say while I'd heard good things about this spot I was still surprised how much I liked it. The fries were really good too. I could see this place having a handful of Suburban locations soon. Chicken sandwiches aren't the most exciting thing out there but they can really hit the spot when done properly. Props to Fry the Coop for doing so. 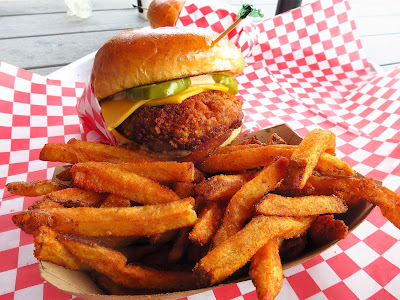 Fried Chicken Sandwich and Fries at Fry the Coop

Thank you so much for coming out and supporting us!!! We are so honored by your kind words! So happy to hear you had a good experience! You made our day! THANK YOU!!!!