Drive In's of the Midwest

Summer is still here but it's also almost over. Damn it goes quick. Well there's still time to plan a weekend adventure or take a cruise somewhere close for the day. So I wanna share with people seven old school Drive In's that are still in business for you to pull on into when you find yourself hungry around any of the seven featured spots located in Illinois, Indiana, Wisconsin and Michigan. Each one will take you back to another time, like when they first opened up because as you can see not much has changed at these old school Midwest Drive In's featured here today.
________________________________________

The Polk-a-Dot Drive In (Braidwood, IL)

Originally a school bus with rainbow polka dots painted all around it the Polka-a-Dot was started over 50 years ago according to their website. Nowadays it's a classic 50's style Drive In and one of the most authentic Route 66 attractions alongside the old American highway in Illinois. It's been called "the best 50's and 60's Drive In I have ever seen" by Route 66 Historian and Author John Weiss. Every year on the first Saturday of August they hold a classic cruisers night and it attracts some of the best old school cars around the Midwest. However I just checked the website and Cruise Night was canceled this year which could mean Polka-a-Dot is in trouble. 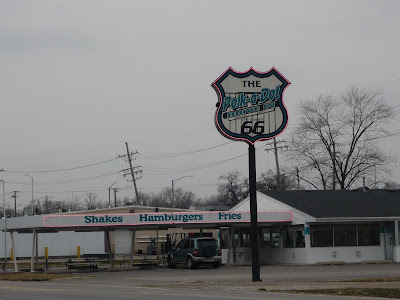 Old 50's style Drive In along Route 66 in Illinois

The menu at Polk-a-Dot is your standard Drive-In fare and mentions their chili cheese fries as some of the best of it's kind anywhere so along with those I got a double cheeseburger on my visit. It was good, nothing special like the actual Drive In but also more than edible in that I finished the burger and most of the fries. 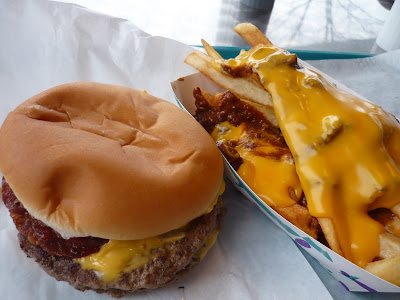 Here is a spot I randomly passed by while driving the Dixie Highway. Located in Momence right on the highway was this cool old school spot that offered egg rolls? I had to try them out. Annie's doesn't offer carhop service and there is no indoor seating, it's warm weather months only and the menu features typical American fast food as well as some Chinese American options such as the egg rolls, sweet and sour chicken and fried rice. As we waited for Annie to get to work one of the yocals chatted me up. When I told her I wasn't from around that way she asked me if I ever had Annie's egg rolls, I told her no and she got very excited telling me about them. 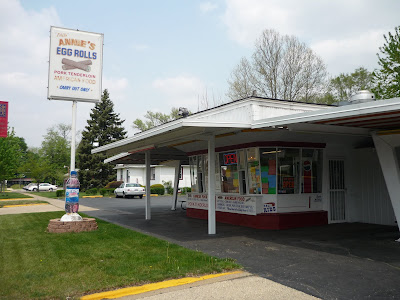 Located along the Dixie Highway in Momence, IL

I opted for what the two locals before me got and ordered two egg rolls with hot mustard, my much preferred choice over S&S sauce. These were really good. Annie doesn't skimp on the pork, they were freshly fried and would sit first class on the Egg Roll Express. Annie popped out from behind the kitchen into the front of the building after she was told I love them and wanted two more and she was indeed the little old Asian lady I had envisioned. She talked to me thru the glass and it was hard to understand her but she was very sweet and also animated and kept saying "work, work, work" which I think she was referring to her very popular summertime egg rolls which keep her busy when she's open for the season. 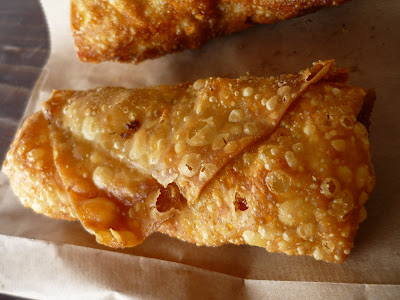 Next we head down to Central Illinois near the great Starved Rock State Park. Oglesby is a short drive from Starved Rock which is a must see IL state park. It's beautiful and a great day trip or even weekend getaway. The Root Beer Stand will take care of one of your meals while down there. They still offer drive up service and its a popular stop with locals and visitors to the park. 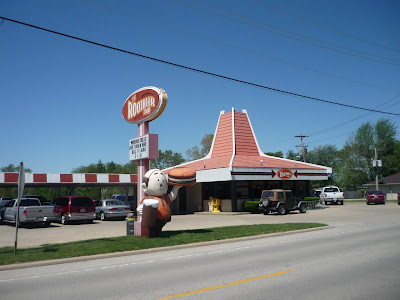 a favorite of campers at Starved Rock State Park

The menu at the Root Beer stand is pretty basic as far as Drive In's go. We're talking burgers, dogs, pork tenderloins, chili and a few other options including the root beer their famous for. The most popular items ordered are the pork tenderloin and double cheeseburger and you have to have either or with a root beer. I liked the cheeseburger over the tenderloin and loved the root beer. Some of the best I have had anywhere and I always stop when I see somewhere that serves homemade root beer. The stand has become a fixture on my stops down to Starved Rock. 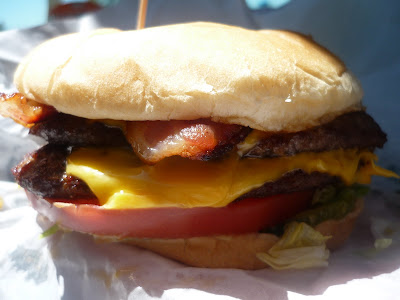 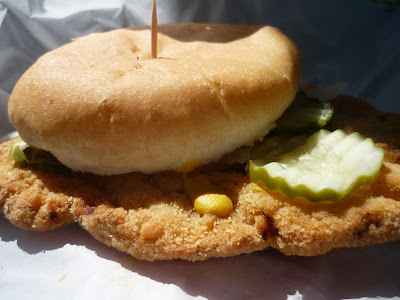 Also in the Illinois Valley Region and near Starved Rock is another classic old school Drive-In known as The Igloo. It was established in Peru on July 4th 1937 and still stand today. The car hops are gone but the generations of customers remain. It's been a fixture of this area for a long time. Until recently it had been operated by the same family since it opened but they decided it was time to retire and sold the place. the good news is the current owners didn't change a thing. 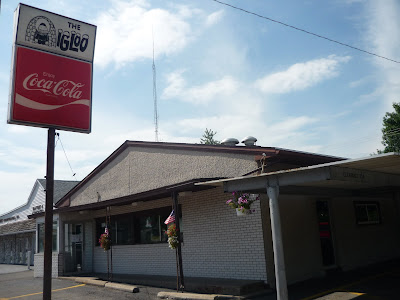 Around the Central Valley Region of IL, the tenderloin as well as fried chicken are popular local eats. The Igloo has offered their tenderloins since they started, same goes for the burgers. On my stop I had to try them both but also had to pass on what looked like some excellent made in house pies. I preferred the burger to the loin here as well. I loved the fresh cut fries and overall feel of the place and will stop back in next time I'm around to further explore the menu. Fun stop and on the day I went in it was about 100 outside and it was very refreshing inside living up to its name. 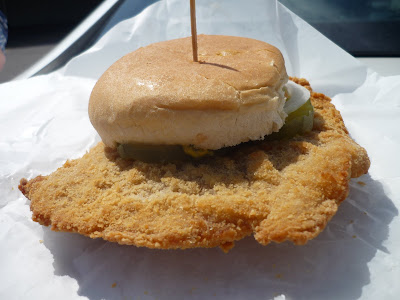 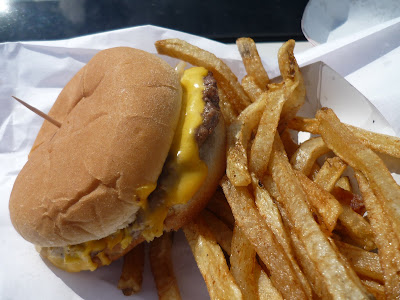 The Port Drive-In (Chesterton, IN)

We now venture outside the state over into Northwest Indiana to a longtime favorite. the Port has been slanging their famous root beer and chili dogs since 1953 in Chesterton, IN. It's gone by a few names since then but the root beer and most of the menu has stayed the same. there is an a/c'd room to dine in at but most people still prefer to have a hot dog with a creamy mug of root beer while in their vehicle. 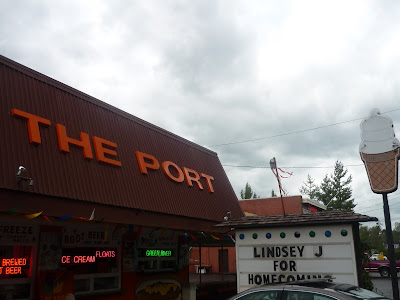 a locals favorite in NW Indiana

The menu nowadays at the Port is large and most of it not necessary. It's all about the aforementioned root beer and chili dogs. I stop by when I'm driving out that way and always get the same thing which is one of each. Not the best chili cheese dog still very good and even better when you wash it all down with their awesome root beer. When its been attracting people since it's opening you know its the real deal. I love their root beer. 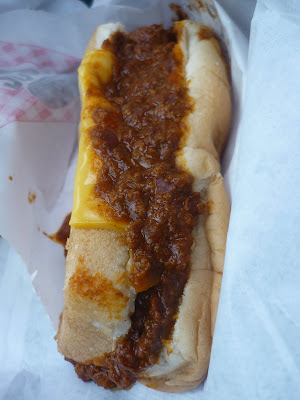 Gilles is Milwaukee's oldest custard stand. They've been around since 1938 and also have a location in Fond Du Lac but that one has no relation tothe other these days. It's all about the custard at Gilles but I love the cheery floats and a Gille burger which is basically a sloppy Joe. It's one of the better Joe's I've had from a place other than my kitchen. A summertime favorite up in Wisconsin, check it out of your ever up that way. 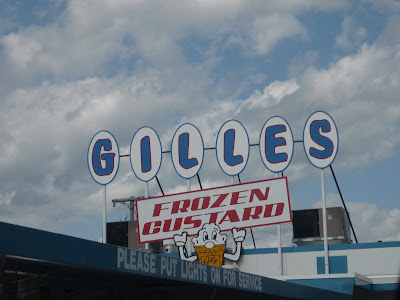 a Summertime favorite in Wisconsin 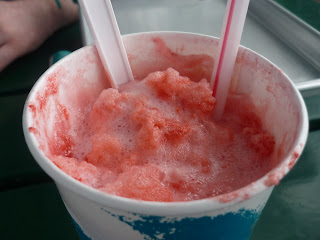 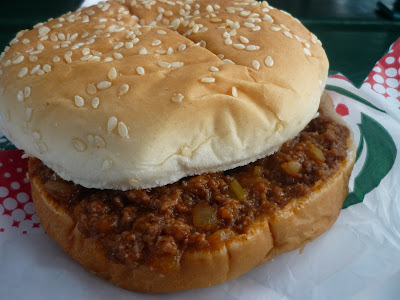 This is a stop I had on my radar forever. Thanks to a rec from a food friend I always wanted to go here but never found it when driving around for fun in this part of Michigan. I'm up this way during the summertime and was finally able to check it out after a trip to the beaches on Lake Michigan. They still have carhop service (on foot) and also an indoor dining room and picnic tables outside for people to eat at. We parked and walked over to the girls working the carhops and placed an order to eat at one of the picnic tables outside. 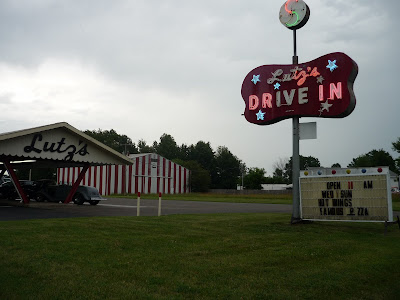 a classic Michigan Drive In

I knew what I was going with thanks to the rec I got a double bacon cheeseburger with no ketchup and then also spied a sign in the window for fresh strawberry shortcake, so I had to have some of that too since they grow strawberry's just down the road. 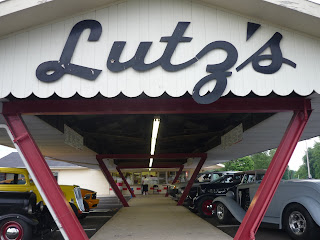 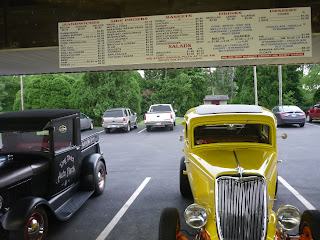 There were four classics in the lot when we pulled in

The burger was $5 and packed quite the punch, well worth it. The bacon was fried to a crisp perfection and they didn't skimp on it. The fresh griddled patties with mustard, onions and pickles topped it all off. I've been eating around this way for years and this was the best burger of the Harbor Country I have come across. There's nothing fancy or even unique about it, it is what it is which is a classic burger in a classic setting. The strawberry shortcake was also excellent, I would get the exact same order again next time I'm there. 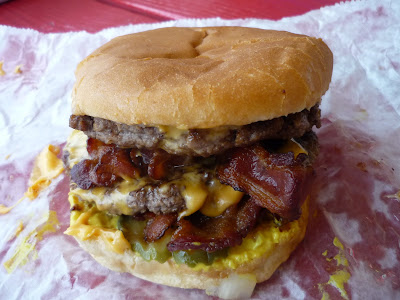 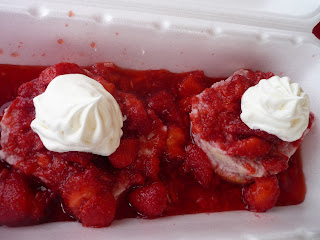 Maybe next time I'm out there I'll sneak my order into the show next door, rare for a town to have both a Drive In restaurant and theater these days, let alone right next door to each other. You aint ever gotta leave your car while on this block. Lutz's also makes homemade pizza which smelled good when we were sitting there eating the burgers. Cool place for lunch or dinner if your up there this summer. Check it out. 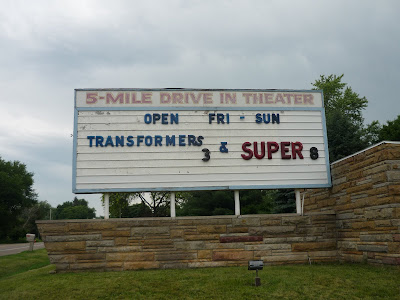 you must try ace drive in on rt 30 in joliet, il

If you're heading south on US 41, check out Don's Drive-In in Kentland, Indiana. It's just north of the intersection of US 41 and US 24, on the west side of the highway (41).