Holiday season is in full swing as is the Chicagoland Hot Dog stand season. When's that you ask? 24/7 365. All the time, every day. Since so many people have to do some serious shopping during the first few weeks of December I thought that it would be a great time to feature one of Chicagoland's best fast food stands- Poochie's. Located in Skokie and not far from the mega shopping center that is Old Orchard Mall it's a great lunch stop any day of the year but especially this time if your headed out that way. Why would you ever waste your calories at the horrific food courts? Poochie's has been a part of the Northshore community since 1969 when they first set up shop. Over the year's it's become what Vienna Beef described as the "Cheer's of Chicagoland hot dog stands" with its regulars and wonderful Chicago style fast food with a great atmosphere and all. 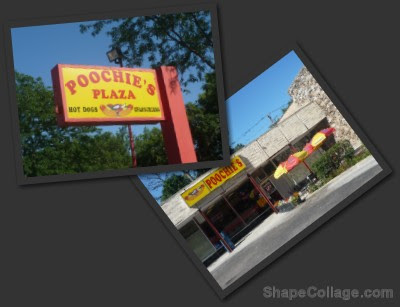 Poochie's in Skokie, IL is a Chicagoland icon

Located on Dempster st. in a plaza, this is one of the best places to dine at in a strip mall anywhere. It's also one of the best hot dog stands in terms of decor and ambiance out there. The walls are flooded with magazine articles, Chicago sports memorabilia and other fun things. When you walk in, the ordering station and grill are in the middle with stool seats at the windows and along the walls leading into the dining room in back. There's also tables outside for the warmer months. The walls show off how much press the hot dog stand has received with articles from magazines like Gourmet and newspapers across the country. It's even got its Roadfood approved article along with it's Vienna Beef Hall of Fame plaque proudly displayed inside. 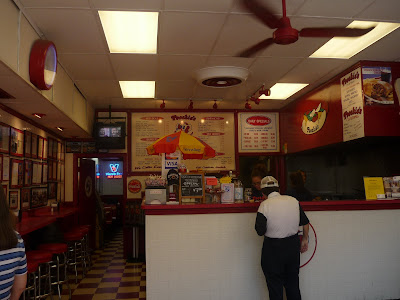 View as you enter 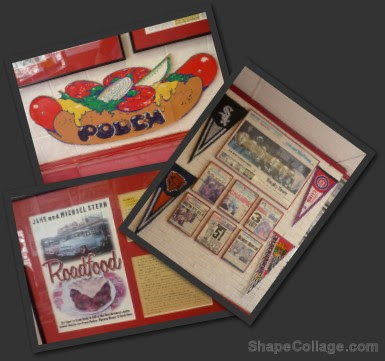 The walls are filled with press clippings and Chicago sports memorabilia 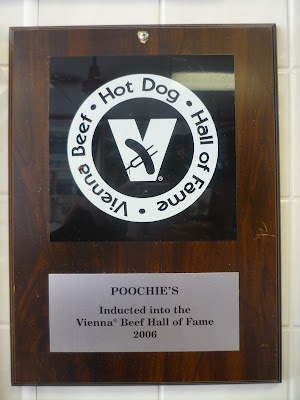 Proud inductee into the Vienna Beef Hall of Fame

But Poochie's wouldn't be nothing and it wouldn't have all the articles and shout outs it has up on the walls if the food wasn't special. The menu is a classic "got it all" Chicagoland hot dog stand menu. It features the obvious hot dogs available both steamed or charred and Polish sausage. Other options available from the grill are char cheddar burgers and sandwiches like steak and chicken. The fries are fresh cut and some of the very best fries anywhere. Just so you know it's "got it all" they even use the real deal Chicago style cheddar for all charred items, burgers, cheese dogs and fries. 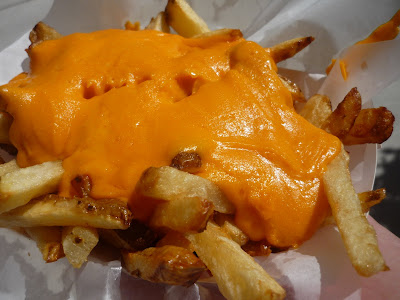 One of the things I love about Poochie's is that is takes care of both lovers of the steamed Chicago style hot dog and those that love theirs grilled. I am a big fan of both and any Chicago style since we are the land of hot dogs and have quite a few ways of making them. At Poochie's they will take a Vienna Beef out of the water and throw it right on the poppy seed bun and dress it down Chicago style if that's what you want. They will also take the dog and throw it on their well used grill and char it up along with some grilled onions if that's the way you like it. 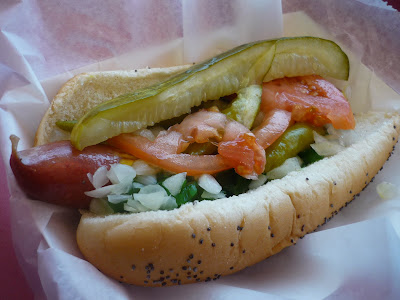 The grill is a wonder and I wish I had a picture to share when it's got no real estate on it. The thing flames up from all the burger patty's and other fine meats and onions being made on a busy day, which is most of them at Poochie's. I enjoyed their chicken sandwich which always has a perfect amount of charred taste and is never bad meat according to it's loyal followers. The char burgers at Poochie's are really special for the same reason as the chicken but then they also come with melted cheddar spread if you choose and the potent grilled onions making it a true Chicago style burger. In the picture below I have a single but a double is not a bad idea when chowing down on a char cheddar burger from Poochie's. 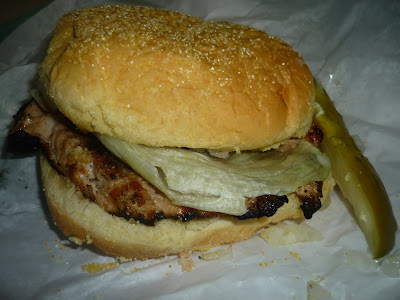 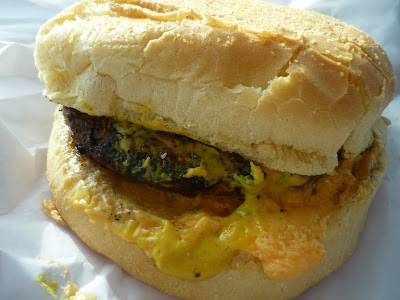 As good as all this food already featured is, there's a reason I love Poochie's and find myself stopping in there a few times a year. It's the home to one of the best sandwiches in Chicagoland and a big time hangover cure. The charred salami sandwich is true Chicago. They take a thick slice of Vienna Beef salami and char it up on the grill and throw it on a French bread roll and dress it to your liking. I always get mine with grilled onions, mustard, sport peppers and a pickle. 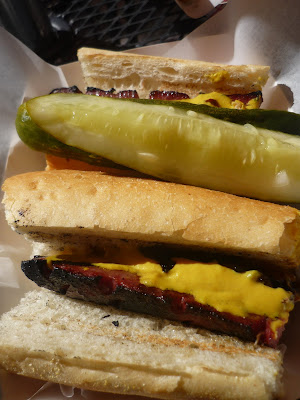 Man oh man is this sammy something else. You don't need to be hungover to enjoy this but you sure as hell need not be a vegetarian. This is a thing of beauty to the mouth and terror to the heart. My friend Steve who's father created this sandwich some 20 years ago when he used to work across the street likes to order his with a slab of bbq sauce added on while cooking and hot giardinara with the grilled onions. It doesn't matter how you dress the sandwich just make sure you try it. One of the very best in a city stocked with them. See ya next time on S'C'&C. 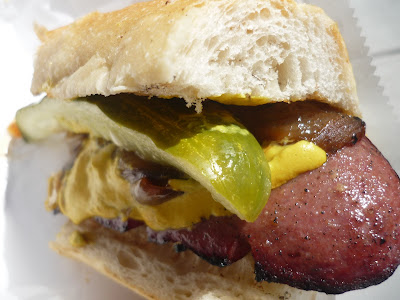 Sammy bliss, one of the best around town