Hello again and thanks for reading. My oh my, it sure has been a while since we took a ride on the gyro-tron hasn't it? seems like years. Well there's a reason for that. You would think that someone like me would be able to fight off heartburn like the North did the South and that I would also get quite alot of it. Well I do lead a good battle in fighting it off but certain food's just cant be fought off. Nothing gives me heartburn like gyros and because of this I have been on a break. I did however dig up some old pics (with notes) from within my food folder of a damn good gyro and one of the far Northside residents favorite's for one and that place is East of Eden's. There is also a West of Eden's in Skokie just north of Touhy and they are related. 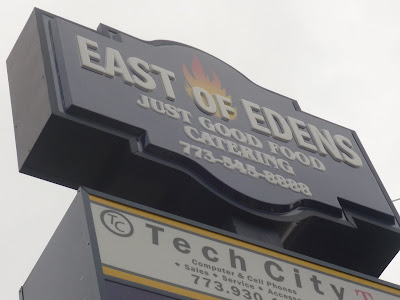 A favorite of Sauganash and the Jefferson and Norwood Park 'hoods

Going on 19 years of business and doing what their slogan say's is "Just good food". Chicago is the land of good fast food joints and East of Eden's is a fine example of one of the many Greek owned spots with a menu consisting of many Greek and also American dishes. Located on Cicero in the fine neighborhood of Sauganash it's just east of the Edens expressway, clever name bringing the EoE movie into it too huh? They have a pretty extensive menu with most of the favorites coming from the Greek part of it. I have heard very good things about the chicken but I have yet to be able to try it. You see I have always loved the gyro's plate which is one of the best meal deals in town. It comes with enough gyro meat for a few sandwiches along with soup, salad or cole slaw, fries and a pita with plenty fresh tomatoes and onions, all for under $8 . It's quite a large plate of food and then you get the soup. The Greek lemon rice is really nice on a cold day like the ones we have now. 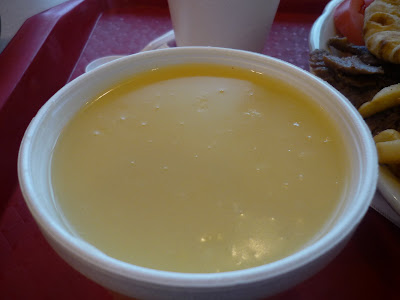 We in Chicago have so many different gyro spots that there is competition in the city for leading gyro cone supplier. In fact we are also the gyro cone capitol as well with there being a handful of companies based in the city that make the famous mystery meat cones. Not too many places make them homemade anymore especially in Chicagoland with there being all these distributors. Kronos is the largest of the gyro cone companies and while I'm not sure what they use at EoE, they are the most common used amongst the Greek spots like it in Chicagoland. So alot of it comes down to how the meat is prepared and by that I mean is it cut nice and thin and given time to crisp up and get that nice brown color? The answer at East of Eden's is yes. The meat here is very good and the best part of the plate like it should be. Well executed and cut perfect every time. The fries took it down in overall score by a point or two but that's just 'cause they're regular old frozen spuds. I would consider the actual gyro's at EoE to be among the cities best. 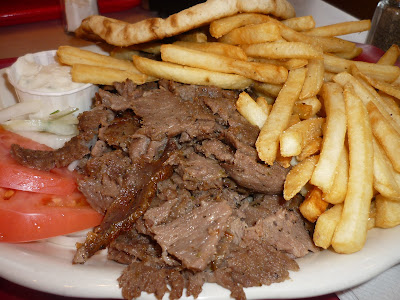 Gyro Plate at east of Edens