Marisco's El Veneno translates to poisonous seafood or seafood venom. I can assure you that there is no blowfish in the tacos' or seafood cocktails or any of the seafood dishes served at this popular little BYOB on Ashland. Only on the walls where they are used as decorations along with pufferfish and other sea creatures will you find them. The menu is all seafood and the recipes come from the Mexican state of Nayarit. One of the country's 31 states it sits along the Mexican riviera which are all states on the pacific ocean. So the style of cooking in this part of Mexico is heavy on seafood and spice with lots of seasonings. The menu at Marisco's El Veneno is the same. The Ashland location has been open for about a year now and they also have a spot on Pulaski in the Southside and a branch in ATL Georgia. Due to the wonderful investigative reporting over at LTH it was noted that the Chicago and Atlanta locations are owned by the in-laws of Marisco's al Veneno in Bucerias -just north of Puerto Vallarta in the state of Nayarit. 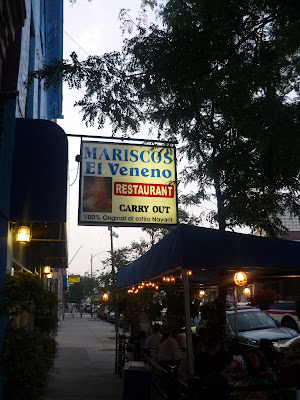 El Veneno on Ashland in Chicago's Northside
I recently got to eat a bday dinner with da family at the Ashland location and it was on the money in my book-and all I play is winners. On top of having a nice little outdoor seating area it is also a BYOB so if you like that, its a big plus. Here's what they got to offer you. 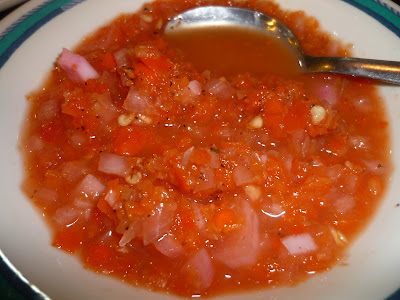 ^I heard and read that the house salsa was the real deal. I read that it is not for everyone and even if you like it hot-this might be too hot. Was it hot? YES but I quite enjoyed it, others might think its poison. It was the hottest condiment or sauce I have had since the Jerk sauce from Bourbon beach in Negril. I couldn't tell you which is hotter but I can say both are probably too hot for the average eater. They do offer a much milder salsa but that's even got some real kick. The chef wasn't lying when he said they like it spicy in Nayarit. I was told that tostadas are used much more commonly in place of chips in Nayarit and so they are also substituted for chips at Veneno. 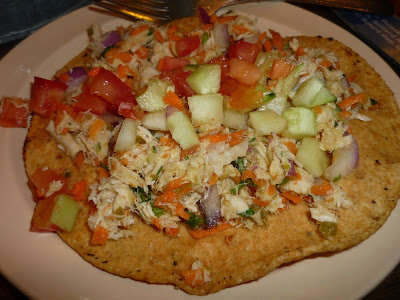 ^The night started with a complimentary crab tostada. The chef is very friendly and he likes to make his rounds to make sure people are enjoying their food and night. If you bring booze just ask for a few buckets filled with ice and they will gladly bring them out to keep it cool. Bring plenty of beer with limes if you plan on eating the salsa. The tostada was a nice appetizer on a summer day and when I laced it with the hot sauce it was a good eat. 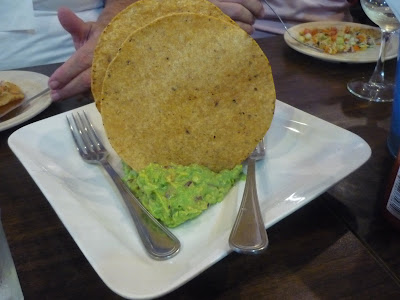 ^Next up was a couple orders of guacamole made with perfectly ripe avocados and served with tostadas chips. The guacamole was great and at $3 and change it was way less you'll get at other finer places and I would say it was better than most of the other spots around town. 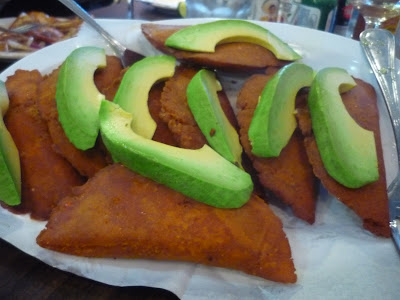 ^The shrimp empanadas were a huge surprise for me. I wasn't expecting them to be that addictive but these were some of the best empanadas I've had in a while. Put a little bit of the hot sauce on them and they become real special. Other people were in agreement that these were very much a gem and a bargain for whatever price they were. 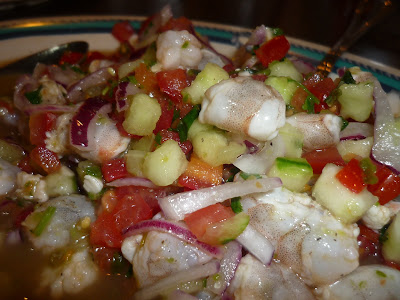 ^The ceviche was fresh and a real treat considering it was a hot summer day and the salsa was still making my tongue tingle. It was enjoyed by all there and is a good choice when dining there over the summer. They have a small outdoor dining area that can seat about 10 people and it takes you away from the hustle and bustle of Ashland with the trees that cover it. 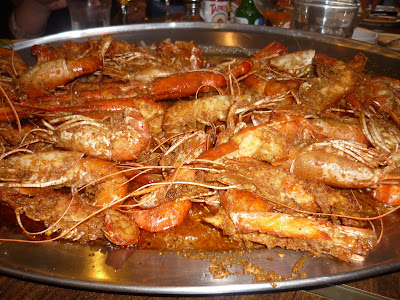 Langoustines in the house sauce
^We ordered a plate of the langoustines in the red house sauce which I had heard was thee menu item to order. The plate comes in two sizes and I don't care what the size of your party is-get the large. The prawns are full of flavor and loaded with Nyarit house sauce that will have you licking the sauce on the plate when there all gone. Its got some butter in there amongst other addicting flavors so its going to be liked by all. One of the best things I've eaten all year and as you can see from this site...I've done some eating. 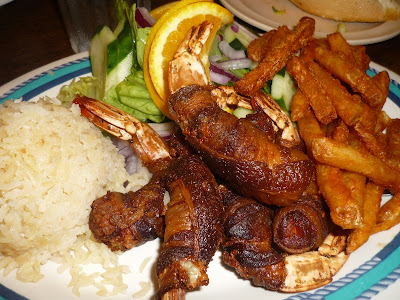 ^When I said the dish of the langoustines in house sauce was one of the best things I had eaten all year I almost forgot about them when this dish came out. Camerones de momias or mummy shrimp-you just kind of knew it was going to be good. The shrimp are stuffed with cheese and wrapped in bacon and fried to perfection. Anything wrapped in bacon is going to have some potential and this reached the max. 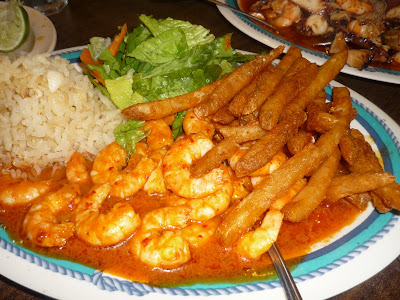 ^In case you havent figured it out by now or are a new reader to my site-I like heat. So we had to try an order of the shrimp diablo which I opted for over the garlic shrimp. Again the sauce was great and when I mixed the rice into the leftover sauce it was pretty damn fire. 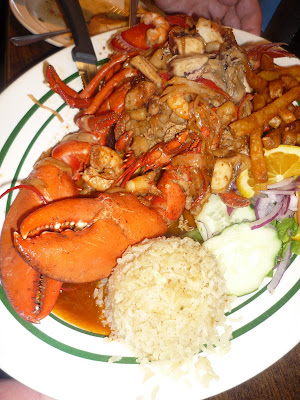 Lobster in red sauce stuffed with other fun things

^Most of the menu items at Veneno can easily feed two people and the lobster is one that can feed 3-4 if not more. Its good to order a few things and split them so you can get as much of everything because like everything else, the lobster was great. It was a whole lobster cooked fresh and stuffed with shrimp, octopus, crab and scallops and slathered in red sauce. 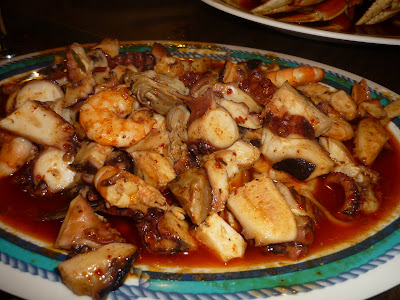 ^This dish, a specialty of the region, was full of flavor and another winner in my book. The Nayarit red sauce was rich and had a real nice kick of spice and smokiness most likely from chipotles. Another deal at $20 since it can easily and should be shared by all at the table. 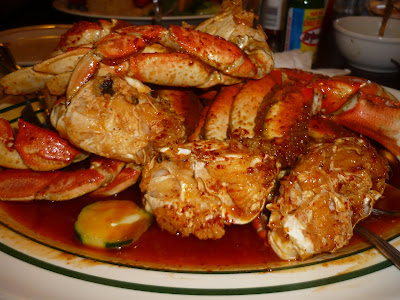 ^The crabs were outstanding. Again served in the red sauce which is loaded with butter and for $25 they give you two large crabs worth so its a deal yet again. The sauce basically seeped into the crab meat and made me wonder if I could ever eat crabs in just plain old butter again. 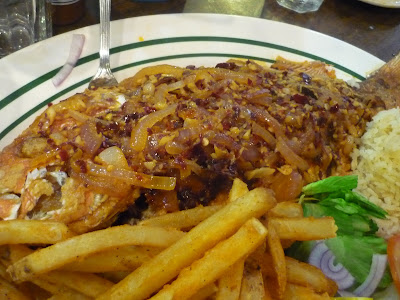 ^This was my favorite main course and one of the best values in Chicago ($14.99) I've always been a big fan of El Barco Mariscos directly across the street and thats because of their snapper. Well Veneno snapper was the best Mexican variation of the dish I have ever had and I've eating it in Mexico. I decided to skip the house snapper which was-you guessed it, loaded in red sauce. So I opted for one which style escapes me but it was the only variation of toppings that we hadn't tried. The fish was cooked perfect and although the fries are your frozen Cajun kind you wont need many because this will fill you up right. I'm afraid that's all she wrote folks. Until next time.

So if you were wondering why they would name a restaurant poisonous seafood? Wino66-a poster at LTHforum explained this on the thread dedicated to Marisco's "The name comes from her father-in-law, who was a professional boxer back in the day (in Mexico) and went under the nickname "El Veneno Negro" or The Black Poison. After his boxing career faded, he started his 2nd career with seafood carts in Bucerias. There is a storefront Veneno up the road from this street cart, but it is so much fun just to hang on the 2-3 stools in the median of Av. Alfredo Bonfil right off the town square and eat fantastically fresh seafood dishes." Its pretty much the same at the Chicago location. Its all in the family at the Veneno restaurants. Bring yours and a bunch of booze over for a celebration dinner.
Marisco's El Veneno
1024 N Ashland Ave
Chicago, IL
773-252-7200
BYOB
Posted by KingT at 10:34 AM