The Chicago Taco Tour lives on! It will always be alive as long as I'm in Chicago. So while the old site might be out of date I'm still getting around town trying new to me spots when I see them. That said when you're approaching 1100 visited in the Chicagoland area there's not quite as many new ones as there once was. But in the last 4/5 months I've noticed an onslaught of taco focused shops open up in Chicago, specifically on the Northside. Of course I made my way to just about all of them. One of them (Pink Taco) I didn't think was worth my time. Another spot (Zombie Taco) I dont think is worth your time so I wont bother with it in this post. As my guy Mike Sula pointed out in a recent cover story for the Reader - taco trucks might not be taking over every corner but taco shops seem to be. 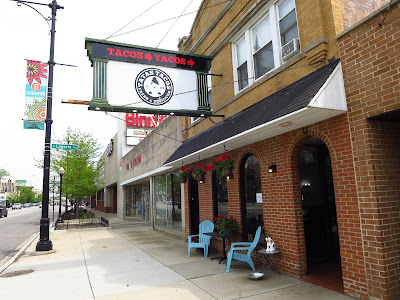 First stop up is Tata's Tacos on the 4900 block of Irving Park. You'll see as we go on that this area is booming with taco shops. Tata's was just getting going when I stopped in last month. It seems to be a female team of workers putting together family recipes for the neighborhood to enjoy. Tortillas are made in house here and out of all the stops on this round-up I thought they had the most interesting selection of tacos. Starting with the lengua - it might've been the best taco of all those featured today. The most interesting taco of all those tried might've been the 'Sirena' which was grilled shrimp wrapped in bacon and served with cabbage, lettuce, chipotle aioli. They also offer a guisado of the day taco which was chicken mole on the day I visited. My only complaint was no rice under the mole. 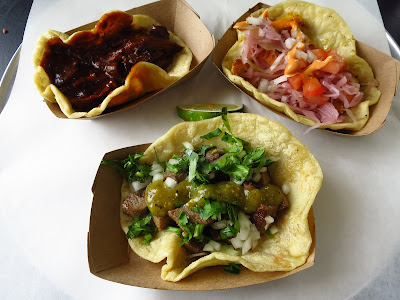 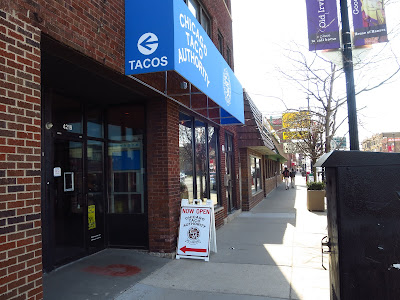 This spot is on the 4200 block of Irving Park and it's gotten some good press since opening. It's a CTA themed taqueria which I'm pretty sure is a first. They really did a nice job with the inside as it's nice and colorful and filled with murals and old relics from the CTA's past. I'd read they were doing a puffy taco and that really got me in quick. We dont have any legit spots doing San Antonio style puffy tacos in the city. Well we still don't. That said the crispy chicken taco that I got which was really just a tostada was still really good. The shell being fried fresh makes a huge difference. A fish taco served on flour was also enjoyed. No pic but the carne asada is in the running for Top 5 in city. Also of note is the fact they have a fresh salsa bar which isn't something you see often in the city and or suburbs. 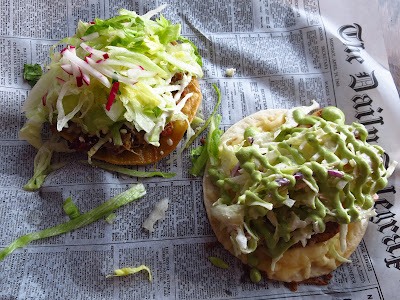 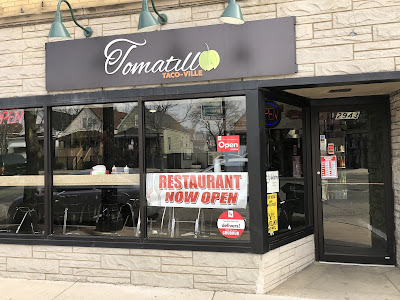 Continuing along on Irving Park we head down to the 2900 block. That's where you'll find Tomatillo Taco-ville. When I first stopped in here I couldn't help but feel like I've been here before. After some looking around I saw they were selling bottles of Cilantro Taco Grill's popular avocado salsa. Now it made sense in that this place is related to Cilantro Taco Grill which has a handful of locations in the suburbs. I'd describe Tomatillo Taco-ville as a good representation of the others which I always thought were above average as far as a neighborhood taco shop goes. They do a grilled fish that gets crisped up real nice on a flattop and cecina with beans spread underneath is always a tasty combo. 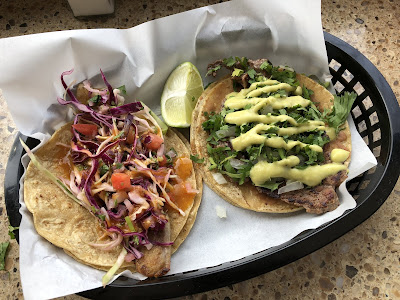 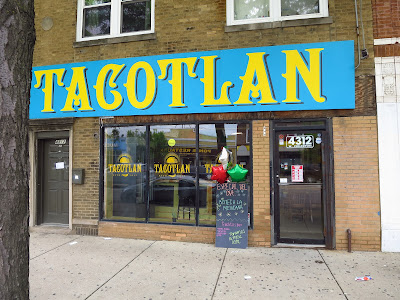 Moving over to the 4300 block of Fullerton is the newly opened Tacotlan. This is a classic family style taqueria where the mother, father, and kids are helping get stuff done. It's just a bit more colorful than most and they also have a social media presence. That's how you know the kids are involved. The tacos here are super solid. Specifically the 'Lalo' which comes with a mound of outer cut skirt steak and your choice of toppings. I suggest refried beans, onion, cilantro, and avocado. Just excellent. 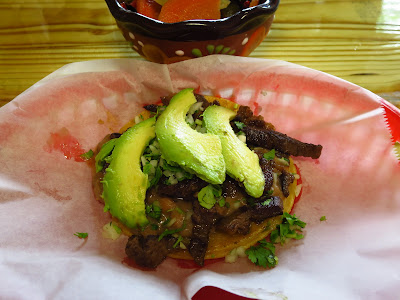 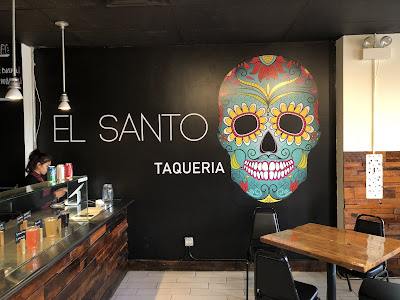 Over in Albany Park on the 3300 block of Foster is the newly opened El Santo Taqueria. It's a trendy looking spot looking to break into a market over there that includes students from Northeastern Illinois University, North Park University, and Northside College Preparatory High School. They call themselves an LA inspired taqueria. Crispy fried shrimp tacos like those at Mariscos Jaliscos?!?!?! Not quite. They use blue corn tortillas (So LA! (sarcasm)) and offer interesting combinations of fillings. I tried two on my visit. First was sweet shredded pork, bacon, grilled pineapple, pickled onion, Chipotle sour cream and then came the Steak & Bacon which was a bit misleading in that it was braised beef, smoked bacon, Asian slaw and queso fresco. Those tortillas were pretty good though. 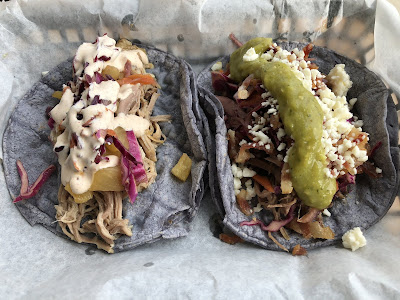 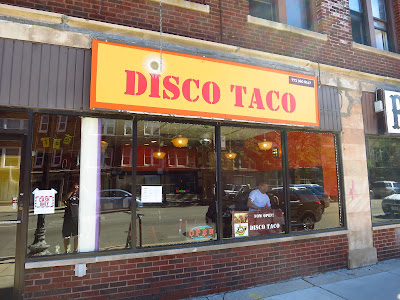 Disco Taco just opened in the last month or so on Montrose just west of Ashland. That red and yellow sign caught my eye and the fact it was a taco shop got me in. I was greeted by a nice trompo of al pastor up and running. But I could tell by the way they'd been slicing it that they're cutting it off in chunks and frying the meat on the flattop. Still I tried one and if anything they crisped up the meat really nice. My steak taco was less enjoyable as it was just kind of plain. They sell salchipapas! 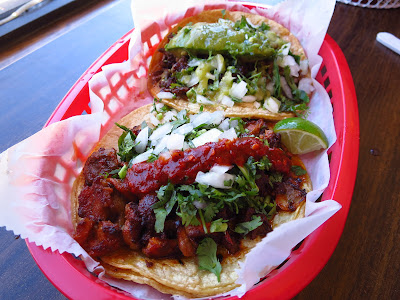 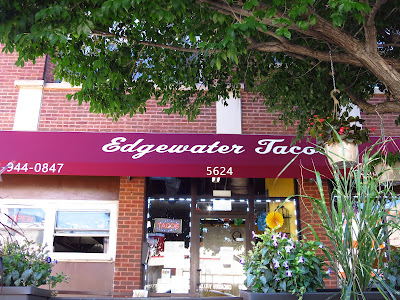 Next stop up is Edgewater Tacos on the 5600 block of Broadway. I saw them on yelp and made a note to get up there to check them out when I had the chance. This too is a family style taqueria slightly elevated with art and stuff to make you comfortable to stay and eat. Though the only reason I need to stay is tacos. They offer a pretty good variety albeit of the usual suspects. I tried a fried fish that hit the spot and a chicken taco that did not. I rarely order chicken due to how boring it is and this proved my opinion on that. Said to be smokey grilled thigh meat it was typical shredded chicken. 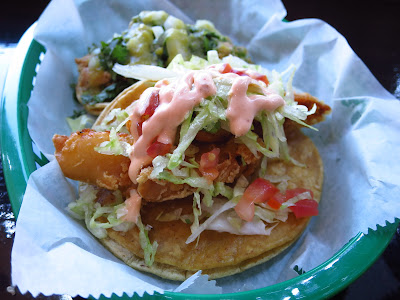 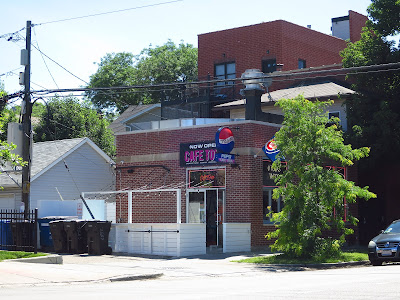 Ever since opening up in that small former pest control shop on Southport, Cafe Tola has really took off. They now have three locations with their most recent being on the 1600 block of West Addison. This location seems to be geared specifically towards tacos. They do sell their famous empanadas here but the case is pretty small. The taco menu is larger than the other spot on California. Still they have a nice section dedicated to breakfast tacos and their machaca con huevos never disappoints. 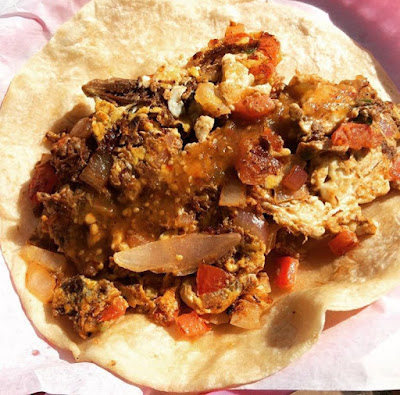 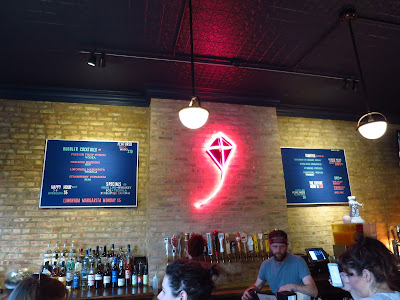 Staying on Addison we head to the 1800 west block which is home to Kite String Cantina. I'm not sure what this bar used to be called but it's a classic Chicago corner bar that decided to go trendy. By which I mean they threw up some neon and put together a cocktail menu as well as a food program. I wasn't sure what I would think of this place but I gotta say I really like what they did. It's not to eccentric and the prices are more than fair at this Mexican inspired cantina. Booze wise they offer a variety of bubblers as well as options like margaritas and shot and a beer. Food wise they serve flautas and I got to say I really liked them as a bar snack. They offer a few kinds all made with fresh El Milagro masa. They're then fried and left to stay warm on those little rollers you see for hot dogs at places like 7-11. Just $6 for 3. I thought this made for a good place to Cubs post game. 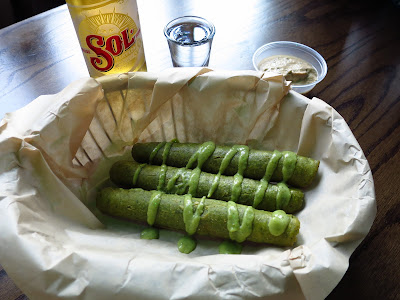 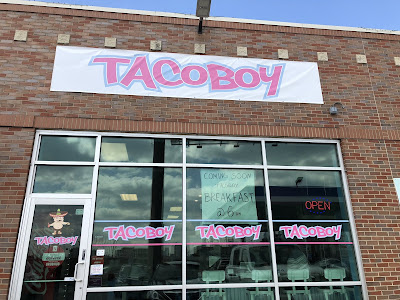 Last stop of this trip takes us over to the Mobil Gas Station complex on Halsted just north of Division. Taco Boy is the newest resident of the little strip mall of spots that share a space with a Mobil gas outlet. Gas station tacos are nowhere near as prevalent in Chicago as they are in other places like Dallas, Texas. But I've noticed a few new ones lately and Taco Boy is the best of the bunch. No head turners on their menu though both the carnitas and the steak had just the right amount of grease needed to qualify these tacos as gas station grub. The well oiled tortillas were loaded with meat. 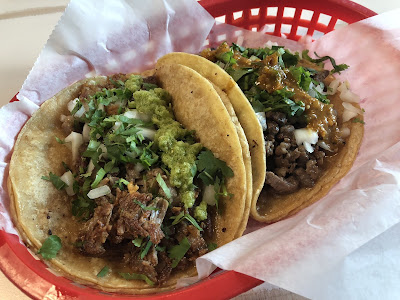 Note: Use google for addresses
Posted by KingT at 12:45 PM