This past week I decided to post a poll to my twitter followers about which food spot I should investigate next. You see I have this list in my iPhone notes of about 30+ restaurants that I plan on checking out at some point or another. So when I posted the poll I picked four of them and after 24 hours the results were in. The winner turned out to be closed that next day so I made my way over to Pilsen to check out the runner up of the poll. El Sazon specializes in Antojitos Mexicanos. Newly Opened on Cermak in Pilsen

In the windows of El Sazon are signs announcing what they will serve you. Aside from the mention of handmade tortillas as well as other fresh masa menu items they also enticed me with burgers and Cemita sandwiches. The menu has quite a few things I enjoy checking out at the mom and pop Mexican spots. For starters a tamale dorado was as pretty as any $1.50 tamale I've tried but a little dry from the frying. Dorado meaning golden which is what they call fried items in Mexican cuisine. 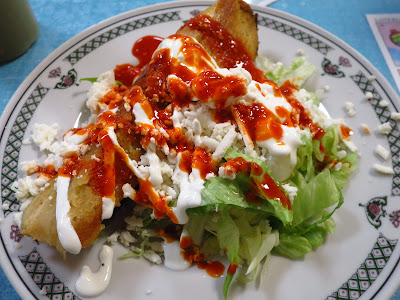 Another menu item that will always catch my are tacos dorados. Only thing is you have to be careful and make sure to clarify that they're tacos dorados and not flautas which some places serve as tacos dorados. These were indeed flautas but the owner sold me on the fact they're made to order with the aforementioned housemade corn tortillas. Not only that but the chicken tinga filling was really smokey and abundant inside these crispy tubes of deliciousness. Really good. I will be back for more. 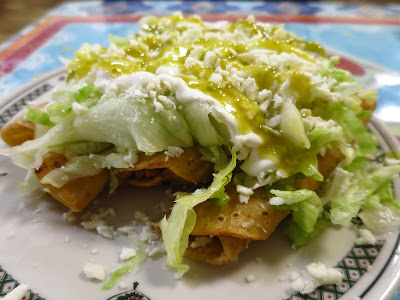 Then there's the Cemita sandwiches. These are not common at all though most everyone who loves food in Chicago knows of Cemitas Puebla and their awesome regional Mexican sandwiches. The region they hail from is the city of Puebla outside of Mexico City. Some of the ingredients that make a Cemita what it is are the bread the sandwich is named after. It should be sturdy with sesame seeds lacing the top. Also of note is the stringy white cheese which is always piled high. This sandwich was good but not what I wanted due to the bread being way too soft. Don't get me wrong I scarfed the whole thing down. But it could've been an amazing sandwich had the bread not been so soft. Still this place is a great little spot and I plan to go back for those flautas and maybe a burger or huarache too. 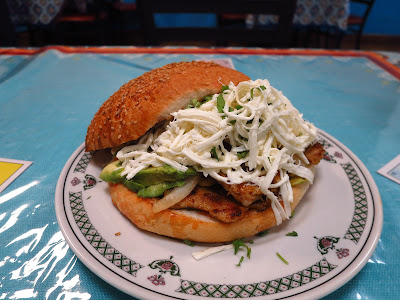 El Sazon has closed a month or two ago, and is now Ghin Kao, a northern Thai restaurant.