When I learned of the future opening of a bar specializing in Mississippi Delta style food I was excited. You may remember a trip down into and through the Delta that me and some friends took back in 2012. It remains one of the if not the best Foodventure I've ever took. It's a trip that's in no way relivable due to places long gone and people no longer with us. Not to mention the fantastic Delta style tamales we ate. These quickly became one of my favorite regional eats. Enter The Delta. 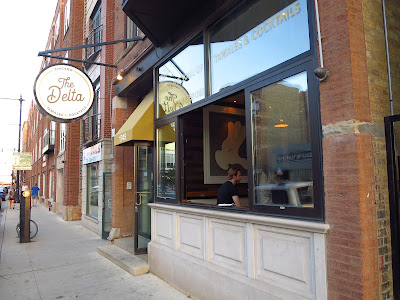 The Delta is the owned by a guy named Eldridge Williams (Girl & the Goat, The Promontory) and it's kitchen is run by chef Adam Wendt. Their idea is to bring the food of the Mississippi Delta to Chicago and mix it with some of our favorites. Chicago and the Mississippi Delta are after all connected in many ways. One of those is tamales. No one knows for sure the history of the Delta style tamale or how it's connected to the Chicago style tamales that hot dogs stands all over town sell. But there's no doubt a connection and it's probably like all others connected through migration. Mississippi style tamales aren't like the Mexican ones so many of us know. These are made with cornmeal that's stuffed with heavily spiced beef. They're cooked in a "gravy" of boiling water with lots of spices added in. They're an African-American favorite and found all over the Delta. And for a time Chicago. 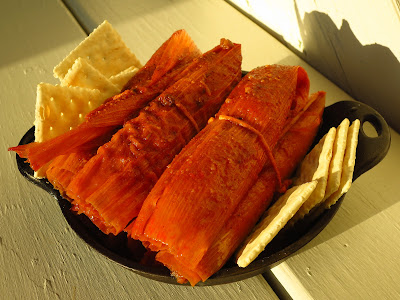 So how do the tamales at The Delta stack up to the ones in the Delta? Just fine! Man I was happy to see that these are only 3 for $5 which would be expensive in Mississippi but when you consider you're at a cocktail bar in Chicago it's pretty reasonable. I'm glad they aren't charging more. Because in the end these tamales are peasant food at it's finest. The Delta makes theirs firmer than mushier but either way is acceptable as both types can be found in the Delta. These little tamales are an excellent bar snack but it felt weird eating them on a fancy plate with silverware. Give me plastic! 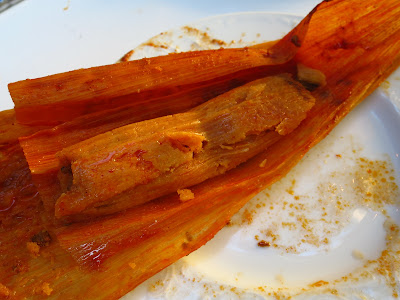 The duo behind Delta wanted to incorporate some Chicago cuisine into the fray and I'm not talking about pizza or hot dogs. As mentioned the Delta Tamale is a snack made and sold predominantly by African-American's and the Jim Shoe sandwich is a sandwich eaten predominately by African-Americans so it seemed like a match made in heaven. The Jim Shoe Tamale looks like that of Garbage Plate. Not literally but the popular style of breakfast found in other parts of the country where everything goes onto a plate. This is a lamb tamale topped with pastrami, giardinera, sweet peppers and more. Honestly it was too much as far as flavors. But the pastrami was killer and I would eat it all day if they sold it as a snack. I think a classic Jim Shoe Sandwich served upscale is a better way go. 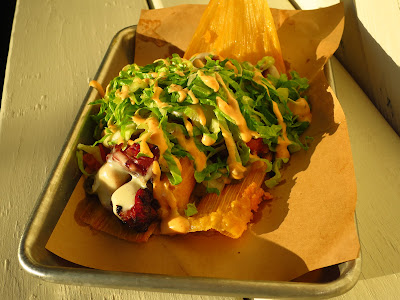 The Delta also makes a Mother-In-Law which is the famous tamale in a bun seen on Anthony Bourdain's show about a decade back. I wanted to try the fried rice though. I love fried rice and this version with fried chicken livers, wild mushrooms, and hens egg sounded great. Only problem was way too much seasoning was used. It tasted like straight soy sauce but I'm confident that without a salt bomb ensuing this would've been a good dish. Nonetheless the tamales are why I was excited about this place and they really are great as far as taste and taking me back to the Delta! I'll be back. 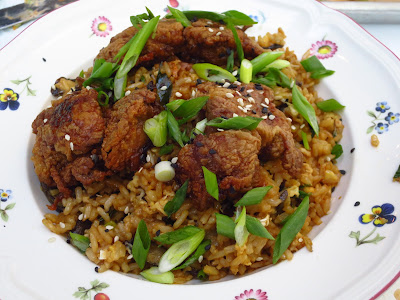 Fried Rice at The Delta