Eating like a local:
Regional food specialties
- Where the locals eat in the Iron City

What a Summer. I did some good traveling as always and the Chicago Cubs are finally back, and so it would seem, it's for the long haul. Despite sustaining the third best record in baseball the Cubs will have to travel to Pittsburgh to play in the National League Wild Card play-in game. Someone is getting screwed as the Pirates have baseballs second best record. I got to take a trip into Pittsburgh this past summer and did some good eating and drinking and figured now would be a good time to share the story. I thought Pittsburgh was pretty cool, and would like to go back for a baseball game. 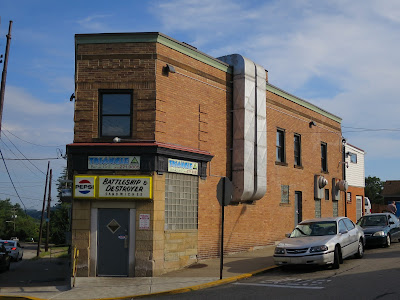 Our first stop in town was for a sandwich. The Triangle Bar & Grill was on both of our lists. It's a sub shop that doubles as a bar. Located away from the area most tourists make it to this place was all locals, mostly locals coming in and out for a sandwich to take home. The main draw here is the Battleship Destroyer sandwich. Its a 24 inch sub popular on Steelers gamedays. It fits 1.5 pounds of meat into a soft loaf that gets sprayed with oil. It's not on the level of some of the subs I ate in Philly but it was a good sandwich. We split a small which was still really big. It's substance over here. 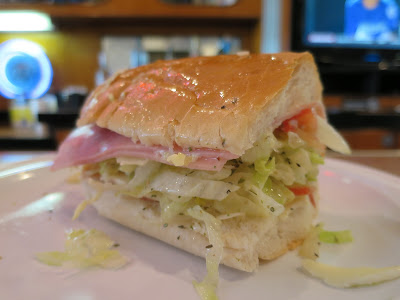 Always on the prowl for popular regional eats I knew there would be pierogi in Pittsburgh. It was just a matter of where. I had quite a few places on my list and Cop Out won out. This place is a weekend only operation ran by a former Pittsburgh cop and his family. We stopped in and I decided to go with an order of the farmers cheese and onion. I was rewarded with the best pierogis I've ever had. The skin was so soft yet stable enough to hold the hot insides while the onion thrown on top was as good of a batch of fried onion I've ever had the pleasure of ruining my breath with. Seek this place out. 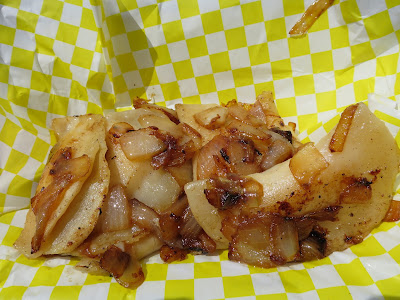 Big Jim's In The Run

Whenever on one of these trips it's near impossible to not get to a spot where the bleached blonde is on the wall. Guy Fieri and plenty other people have been thru this old school bar with a 1960's red sauce Italian menu to boot. They've been at it since 1977. The atmosphere inside reflects those times. 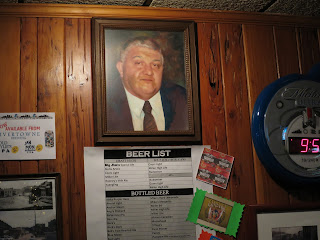 I like spots like these. They remind me of the good old days, before I was born. The menu item always mentioned here is the Veal Parmesan. It's easily split in two and half of one made for the perfect bar snack. One thing I noticed at the sub shop was how much better the bread was across the state in Philadelphia but the loaves from here were how I like them. Crispy with crunch. 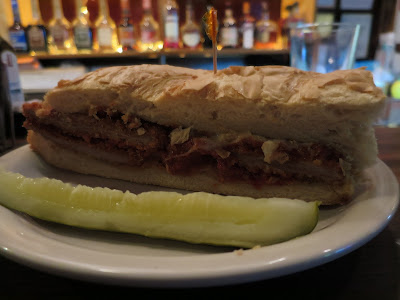 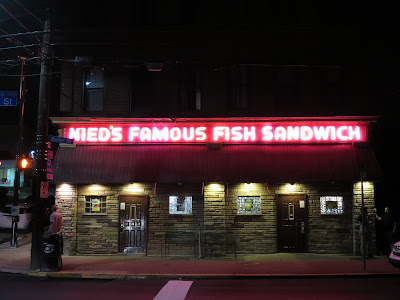 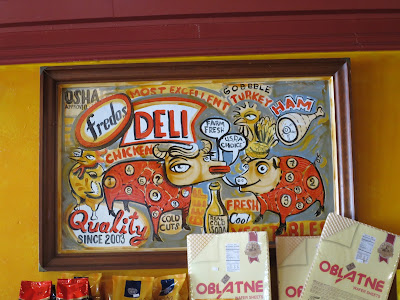 This little Eastern European grocer seemed to cater to the neighborhood. We stopped in for a cevap sandwich and I was pretty satisfied with the results. The skinless beef sausage came from a plastic wrapped bag so I don't believe they were made on-site but the garlic buttered bread was a different story. It might not have been made there but it was wonderful. Crispy on the edges with puffy textures on the inside. As good of a piece of bread as I've had in sometime. 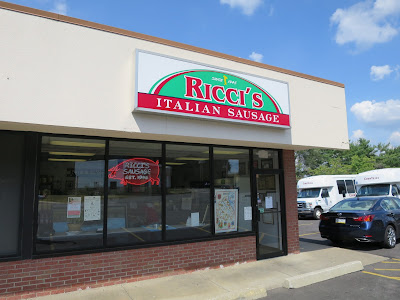 Pittsburgh has lots of old school red sauce Italian type places and as I perused through some of their menus it became apparent that both Hot Italian Sausage sandwiches are popular around town as are banana peppers stuffed with hot sausage. This spot on the outskirts of town was hidden in a strip mall, some of the best spots are these days. We stepped in and were greeted with warm smiles and a very grateful welcome by the owners. I couldn't help but order a piece of the days special lasagna, it looked perfect sitting in there. An excellent rendition indeed. 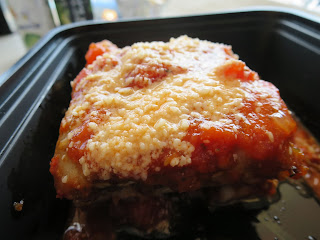 This little Italian style deli fit the description of so many others of it's type across the country. Display case of the days freshly prepared food was in front, fresh made sausage was also on display as were newspaper articles and family pictures on the wall. We were here to try their stuffed banana pepper which I mentioned is a popular eat in these parts. I asked the friendly owner how he stuffed the peppers and he told me they use the sausage machine. He got a tube that fits perfectly into a pepper and they fill them up using the machine. Brilliant. What it does is it keeps the texture of the sausage intact. Which I should add was a very good well seasoned recipe. I love the combo of banana peppers and sausage so this was one of my my favorite bites in town. You can get them as is or in sandwich for m where they put it in bread and top with sauce. Cheese is optional. 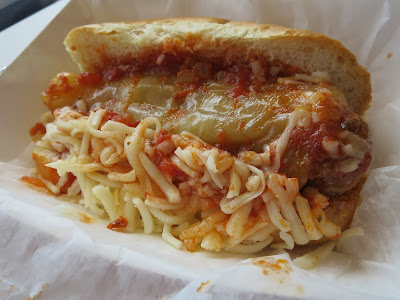 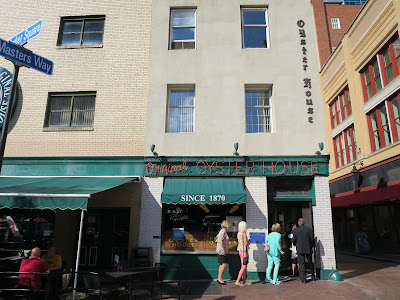 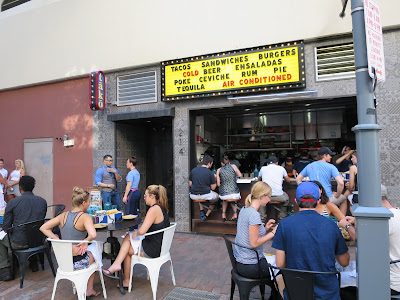 Always down to check out some of the hip, hotter spots in town I saw that this modern taqueria was supposed to be pretty good. It opens in the afternoon and when we got there just before service started there was already a line of people waiting. Despite being the second group in line we were told they weren't seating for the outdoor bar area yet which pissed me off because I didn't want to sit in the dark room inside. Not much good would happen after that. The cocktails were nothing to get excited about and the namesake taco (Tako means Octopus in Japanese) was just ok. It had potential but the octopus wasn't charred enough and the tortilla was mediocre at best. 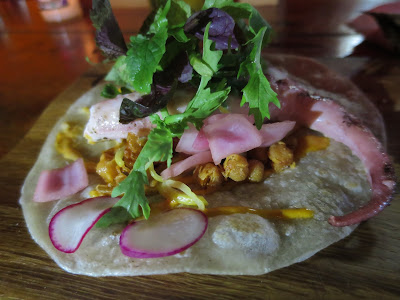 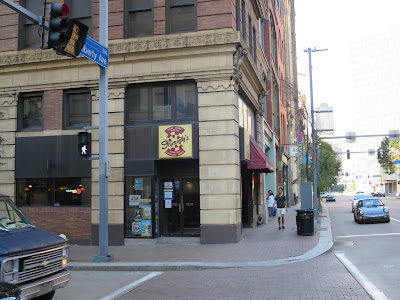 This downtown spot is a lunchtime institution. They serve corned beef sandwiches with cole slaw as well as ice cold beer and other alcohol options. It has the feel of a place like Billy Goat here in Chicago. Not just that but the food is similar too. As in it gets the job done. 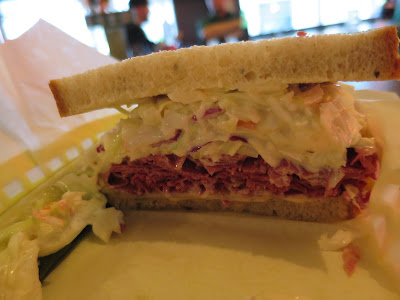 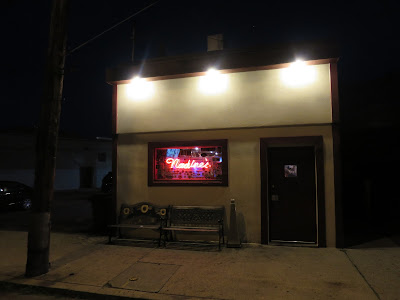 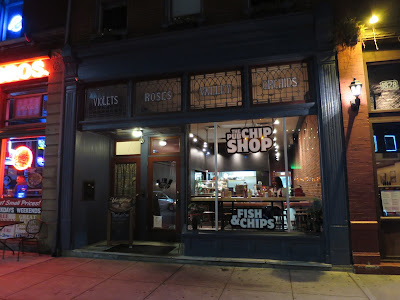 This place was one of a select few on the list that was open late. So we made our way over one night and ended up in one of the more happening parts of town. There's always promise in a place specializing in fish and chips but that would be all there was here. Over fried was the fish and the batter still slid off. The chips were better but it wasn't a top notch batch like I had hoped for. 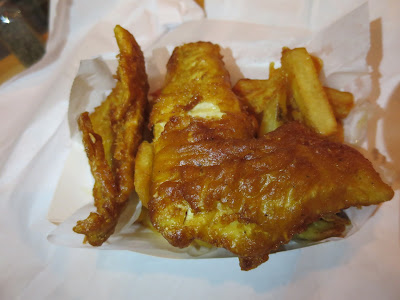 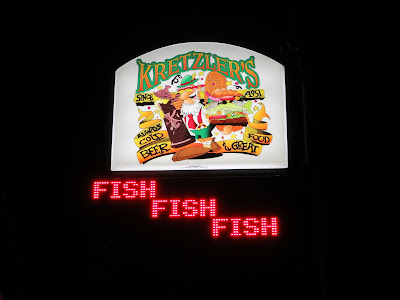 The sausage stuffed banana peppers really left an impression and the want for more. So we decided to head up into the hills and go catch some baseball and have a beer or two while eating more of this Pittsburgh preferred food. It would end up being a long extra innings game and that was good because the hot plate of peppers took a little while to reach the bar. While the combo of Italian sausage and banana peppers is hard to do wrong by, this visit showed us how good Ricci's was. Their technique made theirs so much better. This was more like mush or one big piece ala lasagna. 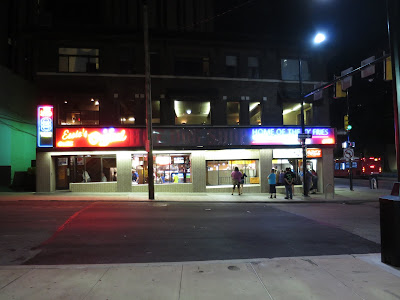 A stop at the Dirty O was a must. Actually this place has many names with Essie's being another. I heard from reputable sources that it was maybe the best hot dog in the country. Heavy praise indeed. It's a late night favorite of all Pittsburgh people especially students from University of Pittsburgh nearby. The dogs here aren't cheap, and neither are the famous fresh cut fries. In fact a hot dog and fries will cost you about $10 so it's much more than Chicago folk are used to paying for a natural casing wiener and some fresh cut fries. A small fries feeds like 3-4 people and I've had plenty of good fresh cut fries which these looked to be but I passed opting to save stomach space. The wiener itself was most certainly the best quality on this trip and one grilled with sauerkraut and onion was very good but I'll still take the minimalist style we got going on over here. They do offer chili here and I heard it was good but I wanted a kraut dog so I passed on trying a chili dog. There's also beer and cheesesteaks. Fun stop. 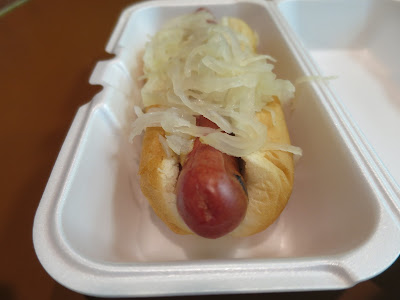 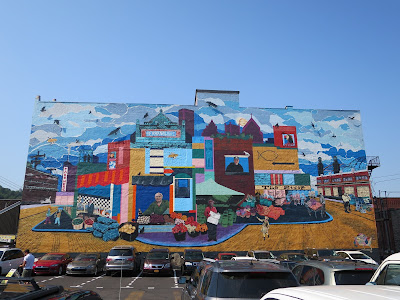 Mural of The Strip

The Strip is always mentioned when talking what to do and see in Pittsburgh. In it's beginning days it was the base for many factories and produce drop offs. Then it turned into a place where one could do all the shopping they needed in one swoop. Fish Market, Butcher, Italian Deli etc. That part of it is still intact as theres tons of old school shops and also some new ones and even some bars and music venues and of course lots of stores to buy junk you'll never think of again after purchase. 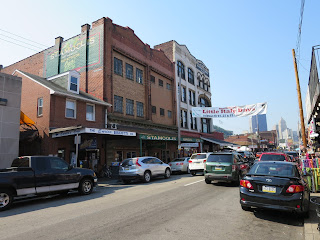 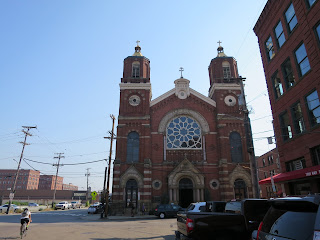 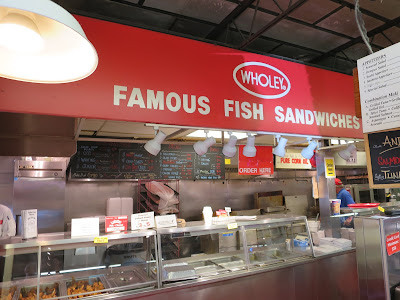 One of PGH's most famous food stops this place is home to the famous fish sandwich. They love their fish sandwiches in these parts and this place serves the most well known one. You get two big old pieces of fish, we chose cod, and they're supposed to go in between a picnic style hamburger bun but I just ate my piece as is. Not bad, much better than the frozen pre-breaded shrimp we got. What was cool here was the ice machine that churned out 1000's of pounds daily so that all the fresh fish could be kept cold. It was hopping on this hot summer day. A fun locally loved spot so to say. 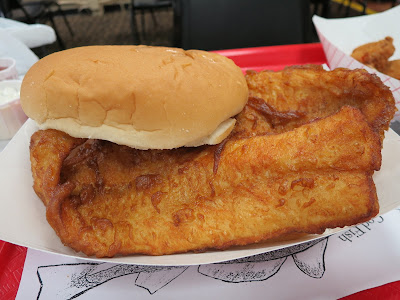 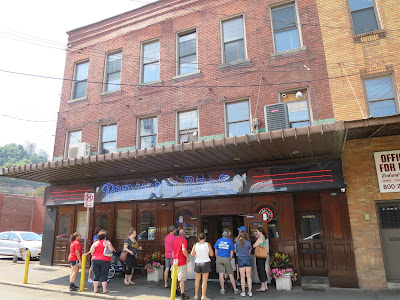 Whats a trip to Pittsburgh without a stop here? I had to do it and I had to go to the original one. Which we got to right before the crowds in town to watch US woman's soccer team swarmed the place. This spot got its start in 1933 and is now the symbol for food in Pittsburgh. You can get them at the Steelers games and I'm sure Pirates games too. They take two thick pieces of bread and stuff their Italian dressing based cole slaw into it with fries, tomato, and your choice of meat. I tried the pastrami but think I should've gone mortadella. I liked this more than maybe I should have since it was early afternoon and it's best enjoyed after a night out in the District. That's it for this trip. 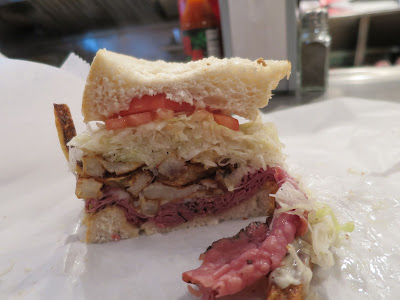 Professional trading signals delivered to your mobile phone every day.

Start following our trades today & earn up to 270% per day.