I was in the middle of Indiana last year and stopped into a local fast food place I had been to before. The purpose of the stop was a quick soft drink but it turned into more when I glanced over the menu. I saw a breaded cheeseburger on there and decided it was time to try one. 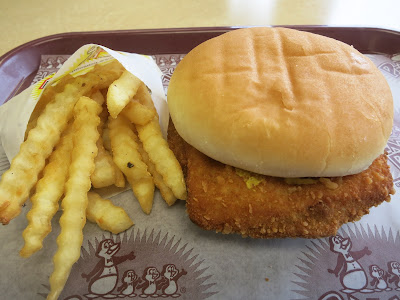 First impressions? These might do well in Bridgeport. The patty itself tasted like a breaded steak minus the sauce. Everything else about it was similar to a breaded steak as far as texture and likability factor and I don't write a sports column for USA Today, so I wouldn't be the one and only person in America who thinks the breaded steak is the best sandwich in the country. I also don't think the breaded cheeseburger is anywhere near the best style of burger out there. Though I felt the need to try another to be ever so sure. 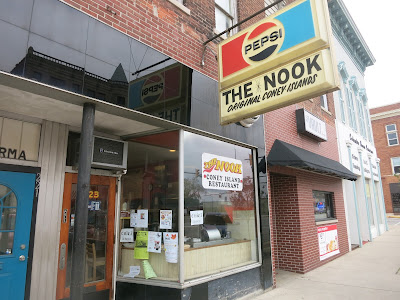 I said I'd make it back. The Nook is your typical Coney Island Hot Dog restaurant and if it seems like I say that every time I post about a Coney shop it's because they're all pretty much the same style with views like those seen below. 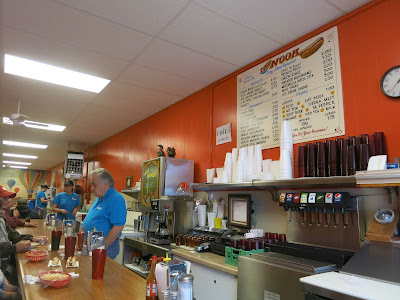 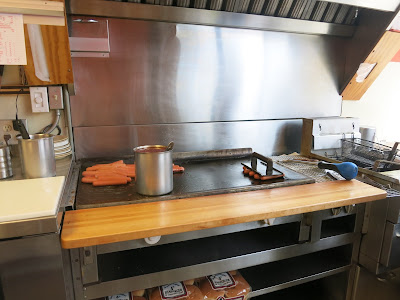 Dogs and a pot of Coney Sauce on the flattop

I chatted with the waitress at the counter and I cant quite remember what year she told me they had been open since but I believe it was in the 70's. I guess at some point after that many of the Coney Shops across across the country started closing down so it's always nice to find one still going strong. They serve a respectable version with the sauce being the standout. Not as wet as a Detroit style Coney though not as dry as those from Flint. Somewhere in between with the spicing combination found in most other offerings. Coney stands outside of Michigan most always use cheap wieners. 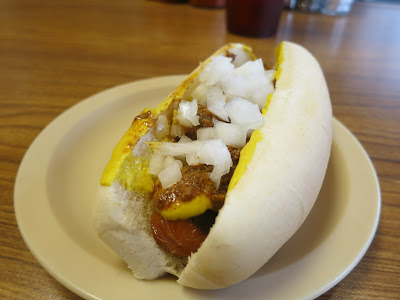 This visit was in the Fall so chili was available and since it's a totally different recipe than the Coney sauce, as it should be, I decided to try a bowl of that as well. This was a very thin version with some hunks of tomatoes inside with minimal traces of ground beef. Very soup like. 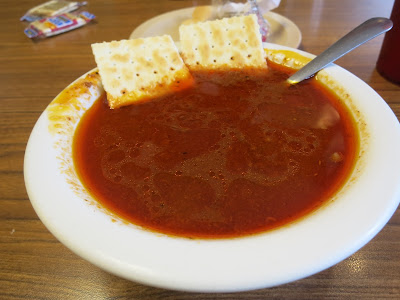 Then there's the breaded cheeseburger which I also had to try to see what if anything was different about the one here than the one tried at Penguin Point the day before. The answer? Nothing, except better placed toppings. Turns out these are a popular snack in the area due to a regional butcher shop that freezes and then packages them for restaurants and the public to purchase. I'm not sure who's responsible for their creation but there's little doubt that whoever started the trend did so in the idea of a cheeseburger mixed with a tenderloin. 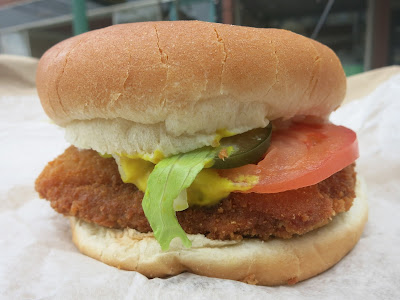 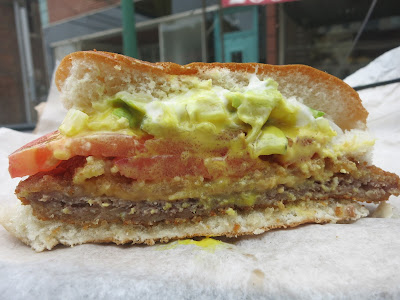 Sometimes I'll put 'no highways' in my GPS when headed home from elsewhere and with it I get to roll thru some random towns and maybe come across a random spot. In this area of Indiana there's still a ton of B&K Drive In restaurants. According to Wikipedia the first one was founded in Michigan City in the 1940's and at one point they neared 250 locations. The ones that are left today are all independently owned and operated giving each one it's own character as far as looks and feel. The menu at most are the same with the longtime signatures of the establishment being the homemade root beer and Spanish Dogs. The latter being a type of hot dog sauce, different than the Coney style, that I guess originated with the first B&K. If you google around there's a couple blog posts recollecting this regional eat and even a few copycat recipes. Unfortunately all of the B&K's I passed by had closed for the season but I still snapped some photos of some of them as it seemed each town in the area had one. FYI this is the part of the state about 2.5 hours southeast of Chicago and right in-between Lafayette and Fort Wayne. 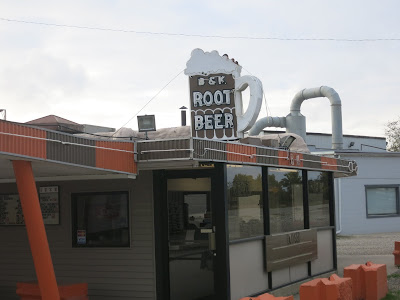 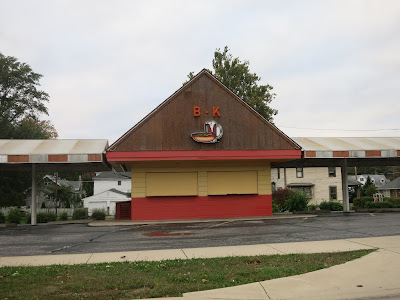 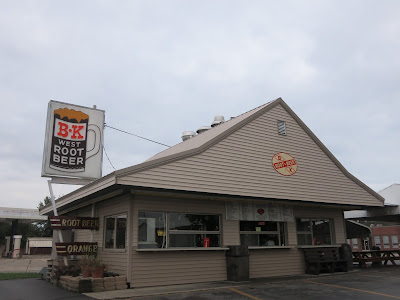 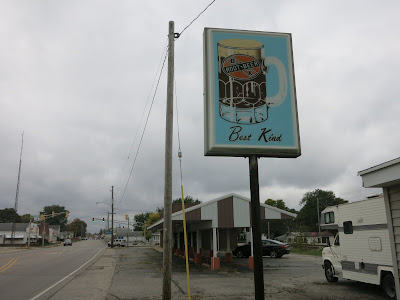 Though I didn't get to try one from a B&K the Spanish Dog seems to have spread out to other establishments in the area. There's still lots of Drive In's in Middle America and plenty of them are in these parts. One popped up in the form of Mr. Weenie in Peru and I popped in. 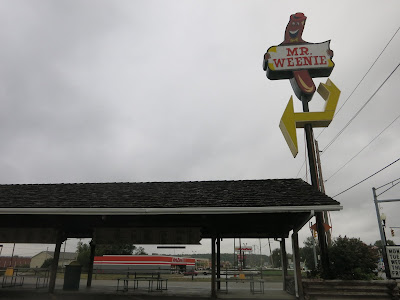 "A classic drive-in with a gigantic grinning hot dog for a mascot. From his stand on the soaring highway sign, the friendly frank--dressed in a bowler hat and bowtie, holding the words "Mr. Weenie,"--has lured diners since the '60s. Local and long distance dog lovers pull up to the covered drive, where they're met by a carhop and a choice of 12 different types of weenie, from the standard plain pork version to the Chicago beef dog with mustard, relish, onions, pickles, tomatoes, and hot peppers." - Indianapolis Monthly 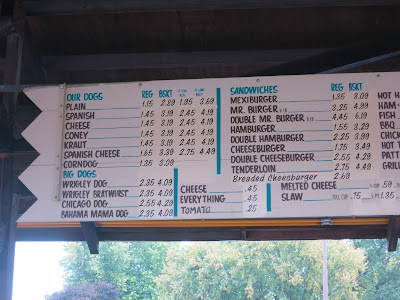 The Menu at Mr. Weenie

A quick glance at the menu and you don't have to look hard to spy a Spanish Dog on offer. It's the second one listed which means it must be popular. Also on there is a breaded cheeseburger which I'm good on forever. Don't expect this thread to reach Burgers of Wisconsin status. Just one Spanish Dog for me, for documentation sake and to see what they're all about. Upon trying one I felt like I had eaten one before and it's possible I have in the form of Jaenicke’s Root Beer Stand in Kankakee. Maybe they started off as a B&K? Or maybe there's a different connection or maybe what they call a Red Hot in those parts is called a Spanish Dog in these parts. Who knows but you probably had to have grown up on these tomato tasting cheap wiener treats to really love them but I'll stop into a B&K next time I'm driving by and enjoy one with a frosty glass of root beer. See ya next time. 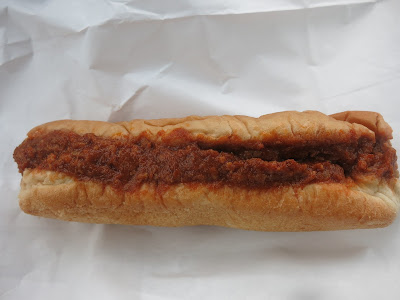