Phil Ashbach knows Chicago style fast food. The man who's first name dons Phil's Last Stand on Chicago avenue in the Ukrainian Village neighborhood spent a lifetime eating at every last hamburger and hot dog stand that this city has. He's been in the hot dog game for over 40 years now having started off as co-owner of Herm's Hot Dog Palace in Skokie. After quitting that he helped raise his family while continuing to eat plenty around town, the man isn't small. As the kids grew up and went their own ways Phil decided to get back in the game with the opening of one last stand. 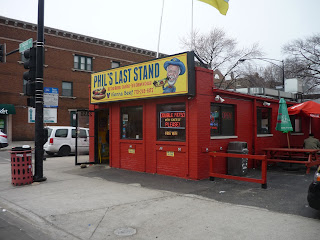 A sign inside the place tells the story of Phil and how he's the original "foodie expert". Before social media was buzzing over some drugged out chef making some small plate dish that mixes goose poop with sea urchin, Phil was exploring Chicago's food scene while sacrificing pounds to his frame. You can tell with the food. This is a classic Chicago style fast food shack. To be that you need a top notch hot dog. Phil's does char dogs which rival the Wieners Circle. The fresh cut fries are perfect and while you wont get any vanilla shakes from him you will get a laugh as he's usually there manning the register.

Aside from the usual offerings theres some other stuff here you wont find elsewhere. They do fried shrimp which is a popular thing to eat in Chicago. They also happen to have some secret menu items ala in and Out and their fried shrimp po' boy is one of those. I dont know if po' boy is the right word to describe this sandwich. I guess its kind of like one had mated with a frita cubana. The shoestring potatoes with secret sauce and their pretty powerful panko crusted fried shrimp (avail. by the pound) make for a tasty treat. 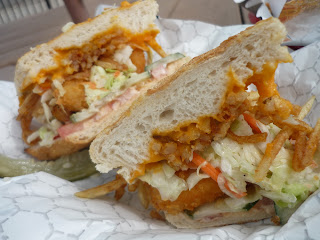 The menu item for me that sets Phil's apart from many is their hamburger. They're made in the style of In and Out which I actually wasn't all that impressed with when I went in Las Vegas. But the difference here is they get a little taste of Chicago by cooking the patties on a char grill. It makes a huge difference and pairs well with the thousand island style sauce they use to make these "fatso" style burgers. A double with cheese and a medium lemonade and grape mixed drink is all I need when I'm hungry and in the mood for some fast food. I'm honered to wear Phil's old crown as the king of Chicago style fast food and bless his last stand. Amen. 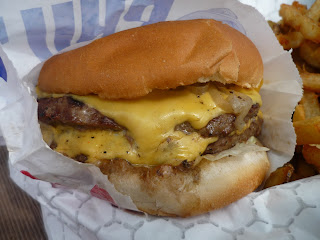