-Grubbing in Chicago
Where the locals eat/drink.

There's some great food stops in Chicago that seem to get little love on the internet. So today we head over to one. Located down a street where you wouldn't expect there to be any operating businesses left, Loncar's is a little jewel on the Southeast side. I'd driven by here a few times before stopping in but did so with the Grubseeker a couple months ago. The big red brick building without any windows and a big Old Style sign in front can be a little bit intimidating for some from the outside but it's a great friendly vibe inside. 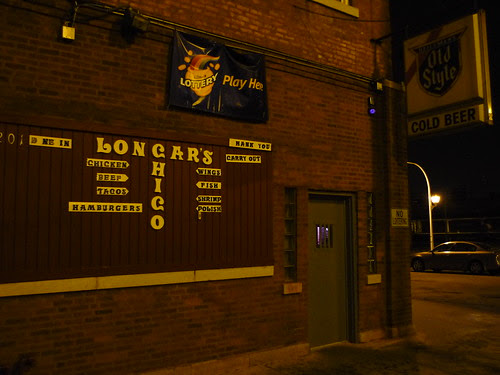 Fan's of the hit Showtime series "Shameless" will get a kick out of this. If there was a bar in Chicago I could picture a real life Frank Gallagher walking into, Loncar's would be it. They have all your drinking needs whether it be for there at the bar or to take home with you after a long day at the factory. They've been supplying drinks to the old hood since before prohibition. There's a great article from the Sun Times about Mr. Robert "Bobby" Loncar who spent half of his life manning the bar here. The street now has his name honored on it. These days it's a popular place with locals for food, drink, chat and Chicago Cubs baseball. Yep a Cubs bar on the far southeast side. They seem to have a Kansas hoops connection too. 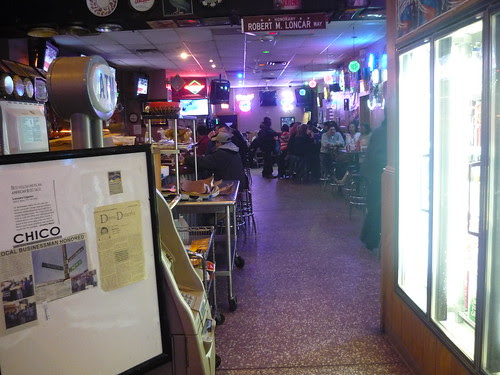 Bobby's Croatian immigrant parents started Loncar's in 1924. Family lore has it that his mom Catherine ruled the bar with a meat cleaver by her side, throwing out members of Capone's gang when they'd try and capitalize on them during prohibition. Back in the day they brewed their own beer and wine upstairs. The homemade grappa is said to have put hair on many a man's chest from around here. At some point the 'hood Loncar's is in started becoming Mexican. Instead of shutting down shop and calling it a career they just adjusted to the times. Robert learned to make menudo for his loyal customers and made newbies to the neighborhood feel as welcome as anyone. These days it's been taken over by some long time customers who wanted to continue it's tradition. They're doing an excellent job. 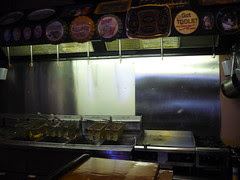 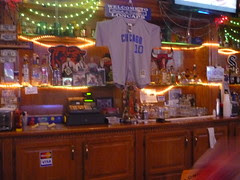 What you'll see on your left as you walk in, about 10 fryer baskets and a bar

One of those traditions is their fried chicken. When you're walking into Loncar's its hard not to want some ASAP as it floods the streets with an amazing smell coming from the vents. They fry it fresh with a crispy heavy coating that I enjoy. It might not be the most highly seasoned bird but they carry the famous Hienie's Hot Sauce from around this way. You can learn more about this popular southeast side condiment from Kevin Pang HERE. Drown the chicken in this and it's some of the best in the city. Quite addicting actually. 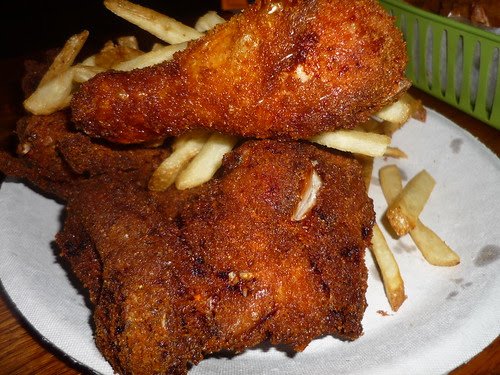 As far as food goes all they have on the menu is that which can be fried. This includes my guiltiest of guilty pleasures, their fried tacos. Every Wednesday they offer this signature item for $1.50 each. They take chopped hamburger meat and throw it in a soft corn tortilla and then put a tooth pick thru to hold it together. They're dropped in the deep fryer and cooked thru til crispy, toppings go on after. You just know they're not healthy because they're so damn good. Any "best of" taco list in the city should include these gut bombs. Truly the perfect compliment to a bottle of Old Style. This place my friends is about as blue collar Chicago as you can get these days but be not afraid, the people who hang out here are great. 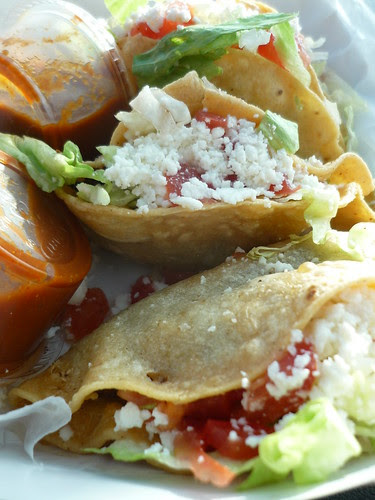