Happy Hot Dog Month to all. To celebrate this July I decided to show some love to five more of America's old time Coney Island Hot Dog Stands. These places are fading away so in our ongoing series we visit five which still survive. Despite the name of this popular style of hot dog being a "Coney Dog" these have nothing to do with Coney Island, New York where Joey Chestnut reigns supreme. America's first Coney shop was and still is in Jackson, Michigan. That's the state where Coney's are King and they seem to be much more prevalent in the Midwest than anywhere else. According to a few stories on the internet including one on Todoroff's website, George Todoroff founded the Jackson Coney Island restaurant on east Michigan avenue in 1914. 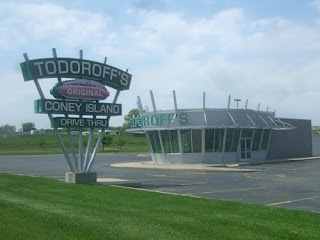 Todoroff's which is now for sale, was later started by his great grandson who's dad and grandpa also owned Coney shops around town. With Jackson being the birthplace of the Coney, there are plans for a 100th anniversary Coney Dog celebration coming in 2014. I'd like to be there to celebrate. I stopped into Toderoff's last summer and was sad to see it and its cool building closed. I didn't know then that theres still two more Coney shops around town. I stopped back around there later this past November. 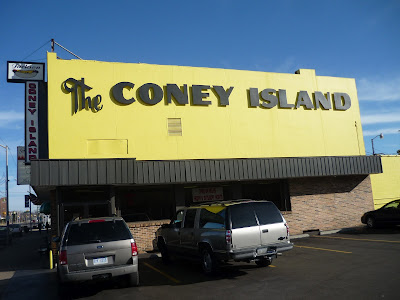 I went in intrigued to try the Jackson style Coney which is a dry based sauce. Inside it was your typical Coney Island hot dog shop with a counter and a few booths with some local town characters sitting at them. Hot dogs were cooking in the window as is tradition. In this case the windows were loaded with grease. Just one Coney with everything (mustard, onions) for me since this stop was just a pre-Detroit snack. I'm unsure what the relation is now between the Jackson Coney Island and the Todoroff's but I would guess the recipe came with the purchase each time it's been sold. 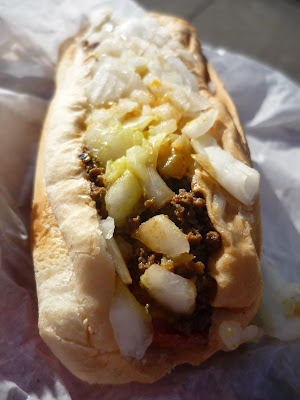 Not bad, not great. Pretty much the same taste result of every old Midwest Coney shop I've stopped in at yet I still love them all. I did however determine that I much prefer the Jackson and Flint Michigan dry style of sauce to that of Detroit and their wet style. Just like a few other places out there including the dueling two spots in Detroit, there's another competing Coney shop right down the block.
________________________________________

Not directly next door like they are in Detroit but the Virginia Coney Island is just down the block from the Jackson. There used to be a third on the block called the New York Lunch but that one is long gone. Imagine a day when three Coney Island hot dog shops could compete on the same block? It's amazing that two still do. 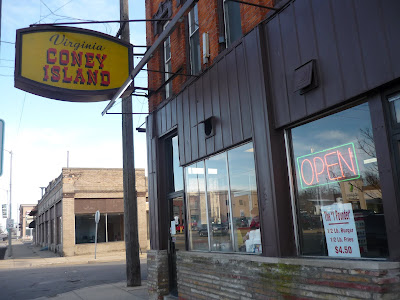 I don't have much info on the Virginia except that they wanted to make sure people know that there was not a man banned from there like was first being reported this past June. I assume they came onto the scene to challenge the Jackson at some point after that opened. It's certainly been around and they had a few regulars in there making double digit orders of Coney's for their tables. It had an authentic feel to it just like Jackson did. 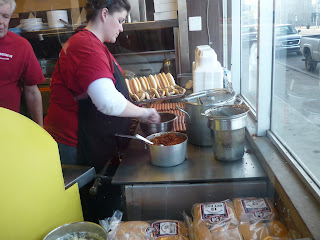 As always, the Coney's on display in front
The sauce I thought was a little better on this one but the onions had a chemical like taste. It was pretty unpleasant but I guess they've always been like that. Maybe they come cut when delivered from the supplier and because of that have an off flavor to them. The biggest reason both of these places were ok was the wiener itself. Nothing special and most certainly not a Koegel's natural casing hot dog like those they use at Lafayette and American Coney in Detroit which are still the best on a Coney I've had. Nonetheless I really enjoyed my visit to both these shops. 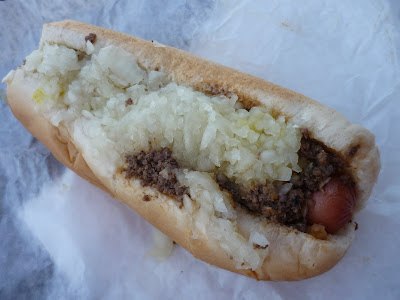 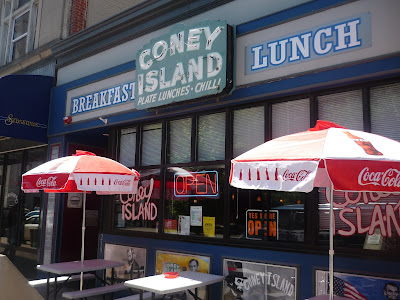 One day a few years back I was bored while riding around Springfield waiting for my buddy to be done with work. Of course I was riding around exploring what there was to eat. Located right near the Illinois state capitol building down there is a long time Coney Island shop. The "new" Coney Island in Springfield has been around a while. It seemed as though a local Tex-Mex type place bought this Coney Stand that claimed existence since 1919. They started serving Ameri-Mex type meals there along with the original menu at some point since. I got a coney with cheese but should have without. I used to get them with but not anymore. I liked the coney sauce but the cheese was horseshoe like. Springfield loves their processed cheese. 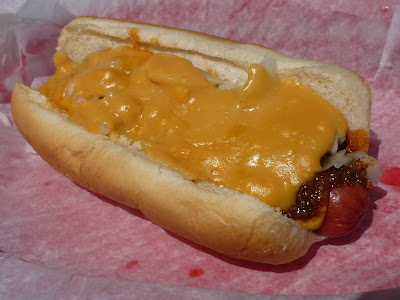 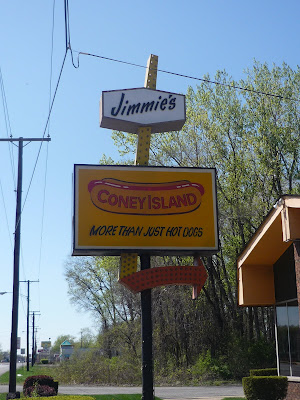 Gary, Indiana is a place that fascinates me. Everytime I ride thru I wonder what it once was like when I see all the urban decay and long gone businesses with signs from another era still hanging. The boyhood home of Michael Jackson is about the only reason people passing thru may stop into Gary these days. At one point Gary had quite the Coney dog culture and we've reviewed the Koney King (Since 1920) here before. Jimmie's Coney Island in Gary is different from most of the rest in that it's relatively new by Coney stand terms. Since 1973 this place has been around. I don't know how much longer it will remain but I'm glad here today that I can say I have been. Not the best ever but an experience in that your eating in an area where most people wouldn't get out of their car. The people here were super friendly so get over yourselves. 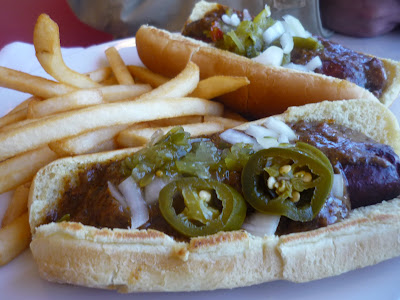 On a recent trip to Indianapolis for some super eats last winter we took a roundabout way back to Chicago thru Kokomo Indiana. To those that are asking, a detour thru Kokomo? I know, lets just say that place isn't the paradise the Beach Boy's sang about. Unless their idea of the pearly gates was "a few bakes". 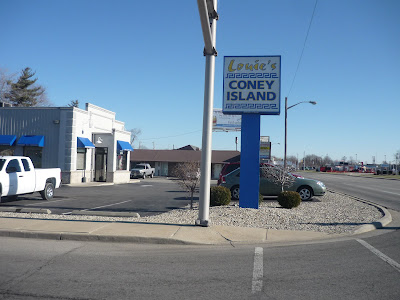 I have a sick addiction to old school Midwest Coney shops. I try to stop in at every and any I've read about online and Louie's was on my list. They've been around since 1937 when a local Greek guy opened up shop. As seen in the picture above, unlike most of the coney shops which are straight out of yesteryear, Louie's is in a new building, taking away the old time charm that the others possess. It's moved a few times, burned down and had a name change according to an online article however the Coneys and Bakes remain the same and it's an icon around that way. 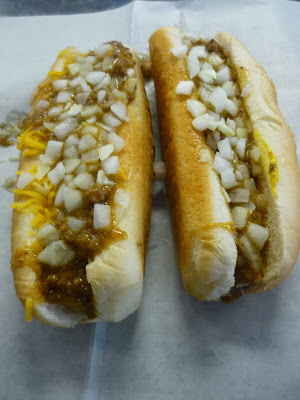 They both look the same eh? So what the hell is a bake? Well let me tell ya. It's a spiced hamburger log. Huh? Yep it's unlike anything else I've tasted or seen. It's ground beef in tube form (casingless) that's secretly seasoned with a very unique combination of spices. The raw formed logs are then baked until cooked thru while bathing in a special sauce. Baked Hamburgers or "bakes" as the locals call them come served in a hot dog bun and topped with some gravy from the bake, coney sauce, mustard and onions. Cheese is extra and they're $1.40 each. 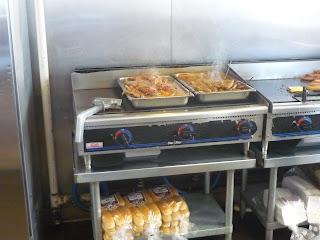 The "Bakes" baking away
Only a few folks from Louie's know exactly what goes into them. No they arent pleasant looking and they're definitely artery clogging but I like them. Marcus Hamburgers in Detroit is the closest thing I've seen to these but the taste between the two places is very different. Consistency wise, bakes are half hamburger, half hot dog. As far as taste goes, they taste like a bake! I guess that's why they're so treasured by those from Kokomo. Happy Hot Dog Month. 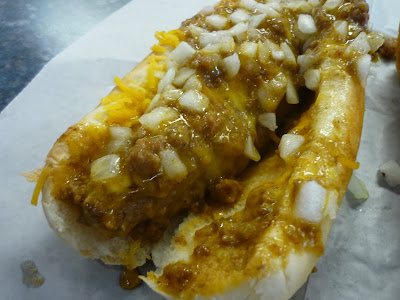 Any recommendations on where to try one of these babies closer to home? - Chicago or suburbs, that is...

There are no Jackson style coney places near to Chicago that I ever found. There was a Detroit-style coney place that closed last September (Leo's). Barring a road trip, you will need to make your own: http://micuisine.com/lunapiercook/?p=1324

I am also under the impression that the Jackson style coney islands can be found in Plattsburgh, New York where they are called Michigan dogs (I've never had one, so I can't say for sure).

Hey guys thanks for reading.

@ Steve, I've heard good things about Andy's and I'll have to try them one day. I didnt know there were that many more places in Jackson. Thanks for the recs. Yes I've heard of Michigans which weirdly enough served in NY while Coney islands are served in Michigan. Ha.

@ Dave, the best are in Mich but theres a place called Devil Dawgs in Lincoln Park which has been featured on here, its great and their Coney is best example I have found in city. Its damn good. I like to get their fries with coney sauce, onions and shredded cheese on top. Good stuff.

Also, I agree with your rating of the actual hot dogs used. A Jackson Coney Island would be much better if they used a higher quality frank. (Though then I imagine the price would be much higher than $2.)