The Thai food in Chicago has always been better than most places. No it's not on the same level as Los Angeles which has a Thai Town neighborhood, or Las Vegas which boasts 100's of Thai restaurants of it's own. But you'll find some of the best Thai food outside of the West Coast right here in Chicago where there's an unusually high number of Thai restaurants compared to the local Thai population which is just around 10,000 people. In fact you can find Thai food in most small towns and there's a reason for that as you can read HERE. Back in 2002 the government of Thailand launched a gastrodiplomacy campaign that has done quite well in making dishes like Pad Thai available just about everywhere. But what separates the top Thai spots in Chicago from the rest of them are the ones that cater to the local Thai community. You can tell which places these are by simply looking at their menus as the ones catering to locals have a "secret Thai menu" that's typically not so secret, as in it's listed on the regular menu. That's the case at Real Thai which needs to be included among the city's best Thai restaurants. It's way out west on Irving Park but don't be fooled by it's location. 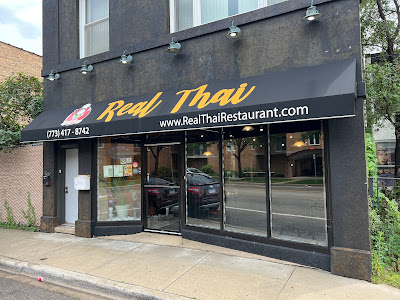 For the most part the city's best Thai restaurants can be found on the North Side in neighborhoods like Lincoln Square where there seems to be one on every block and that extends into areas like Lincoln Park and Uptown. At first glance Real Thai looks like the typical Thai restaurant where you can score some Pad Thai and Spring Rolls and it's location would justify this as the demographics over here tend to be the type that likes that kind of stuff. But true to it's name Real Thai is serving up some real deal Thai food and judging by the customer base, America is ready for the good stuff. Over the span of three visits I've witnessed just about every group represented in Chicago's demographic breakdown. It's pretty clear that not only has the governments plan worked out but it's worked out really well in that people from all walks of life really seem to like Thai food. It's a global cuisine. 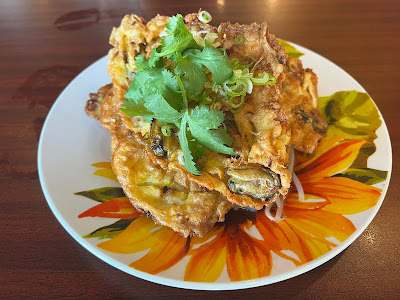 Real Thai has a decent sized menu and most of it is worth exploring. While it's tough to translate Thai food in terms of making it as good over here as it is over there, some stuff works better than others. One dish I haven't been able to find anything close to as good as it is in Thailand is the popular street food called Hoi Tod which is a mussel pancake of sorts. While Real Thai does one of the better ones I've tried Stateside it's not to the level of those I ate in Bangkok which I'm pretty sure are taken to another level due to the use of an extremely large amount of oil. A fried dish that Real Thai excels at is it's Pad Khee Mao. Their "Drunken Noodles" are the best I've ever had made so by the fact that they're offered extra crispy (fried) and also because you can choose pieces of fried fish as your protein of choice. This is quite simply my favorite noodle dish in Chicago right now and it could be for awhile. It hits all the notes one wants when it comes to real Thai food. Sweet, spicy, funky and so on. 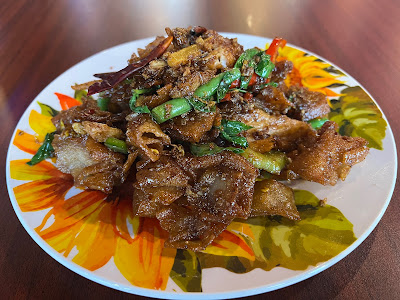 The aforementioned 'Secret Thai Menu' is just one of the sections on Real Thai's menu. There's some interesting dishes like grilled chitterlings which I don't think I'll be trying, at least not unless someone else orders them and offers me some. But other dishes like a bamboo shoot soup or the shrimp and corn salad seem like they'd be really good and according to most of the reviews they are. One of the items I can vouch or from the secret Thai section is the 'Three Flavored Deep Fried Fish' which I'm pretty sure is just a whole fried tilapia (judging by the $20 price). But it's what they put on the perfectly fried fish that makes it so great. The menu lists it as "homemade 3 flavors spicy sauce, dried chili, fried onion" and it brought me back to a whole fried fish I had in Koh Phangan and that's the pinnacle of Thai food in the States and most places outside of Thailand. When a dish can bring back memories of the food you ate in Thailand that's as close as you can get without going there. 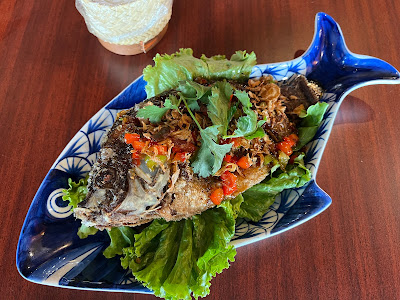