-Grubbing in Chicago
Argentine aka Beef in Logan Square

The reason you don't see a ton of steakhouse posts on here is because I'm not a big fan of the modern day steakhouse. I have no problem paying the cost of one but I want more than just grilled meat and common sides at that price. Cooking a steak is something just about anyone with a lick of common kitchen sense can do. The other thing is I don't eat a ton of steak with the exception of carne asada tacos. But when I do have the taste for red meat I usually just cook it myself and I'm never not satisfied. But every now and then I'll head over to El Nandu on Fullerton in Logan Square where you can find one of my favorite steaks in town. It's an Argentinean joint so beef is front and center. 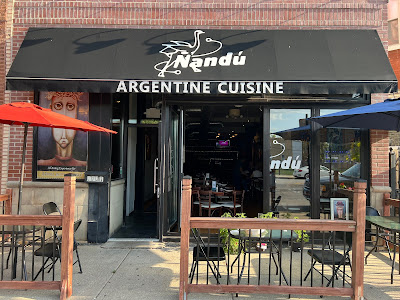 Did you know the average Argentinian person consumes about 154 pounds of beef per year? They also eat a ton of empanadas and El Nandu makes some of the better Argentine empanadas in town. The Tucamana empanada is a style named after the Tucumán province in northwest Argentina. It's made with diced steak, green onions, and eggs and is a candidate for the best empanada in town. Part of what makes them so good are the sauces that accompany each meal. One is a classic chimichurri and the other is a spicy chimichurri that isn't particularly spicy but it does have a bit of kick. Empanadas at El Nandu
There's close to ten options as far as the steak goes but I've never explored any of them past the Entraña which is a 14 oz skirt steak marinated with herbs and oil. It's a $30 steak that I actually think is well worth it when you're looking for some red meat served up at a restaurant. It comes with your choice of one side and even though the fries are the frozen kind I actually think this is maybe the only instance where they work better than fresh cut and that's because of the way they soak up the steak juices. The fries are fried crisp and parts of them stay that way while being heavily infused with the flavor of the steak. It really doesn't need any chimichurri but I still have to have a few bites with some bc it's a great combo. Not all skirt steak is equal as it’s sold in both inner and outer cuts with the latter being more tender and more expensive. Inner skirt steak works great as a taco filling but outer is what you want when you just want a piece of meat and maybe some sides and El Nandu is the spot for exactly that. Whether you just want a piece of steak for a quick weekday dinner or you’re looking for a spot to celebrate with live music into the night, El Nandu is the type of place that can offer both and either way the steak will always be great. 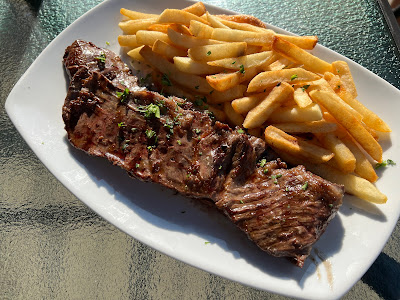