Exactly a year ago to the day me and my wife took off on a SE Asia adventure. I know this bc Facebook told me so. What a trip. We only did two countries (Vietnam and Thailand) but spent close to 20 days exploring them. There's probably not a day that goes by where my mind isnt triggered by memories of this trip. My mind spends too much time daydreaming about our return. I was reminded of the Chiang Mai portion of this trip this past weekend. We decided to try this new Thai restaurant that opened on Milwaukee in Logan Square. I spent a good six months wondering what would replace the shuttered Poutine and BBQ business that preceded it. Well after a soft opening earlier in the month Three Wheels Noodle is now open for biz. As of now it's evenings only. That may change. 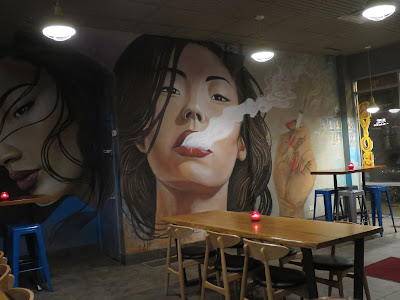 After some online searching I learned that Three Wheels is from the owners of Trike Thai. I'm pretty sure they closed down Trike and opened Three Wheels. It's hard to tell from what I read online. I'd never been to Trike but judging by it's menu it wasn't my type of spot as they had way too many menu items including sushi. Three Wheels is way more toned down as far as the menu. There's only one page and probably less than 14 items total. I guess the fried wings were one of the most popular items at Trike so they brought those along with them. I'd read quite a few endorsements for these in the online reviews of the soft opening. We tried them and as our waiter explained people love them for the house tamarind sauce on the side. I can agree with the Yelpers on these. Addicting indeed. 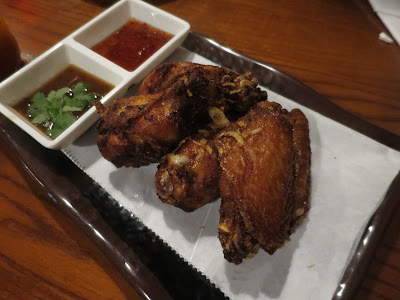 As I mentioned the menu is small and the focus is on noodles. But they also have a few rice options and one dish I think about often from our SE Asia trip is the Khao Kha Moo from the famous Cowboy Hat Lady in Chiang Mai. Well the menu at Three Wheels features a few Northern Thai favorites and Khao Kha Moo is one of them. Braised pork over greens served alongside rice and a hardboiled egg is a very popular dish with Chinese origins. Three Wheels makes a respectable version for a spot where it's not the lone focus. I particularly enjoyed the leftovers the next day. 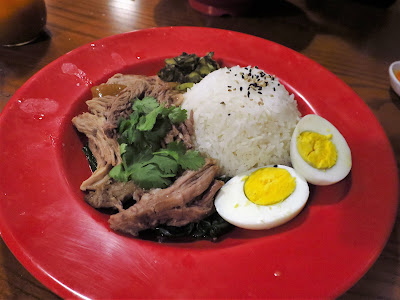 Aside from the wings the other dish that was constantly getting mentioned in online reviews was the yellow curry. Or Khao Soi as it's called on the menu in parenthesis. This is one of those dishes that pretty much everyone who goes to Chiang Mai falls in love with. It too is of Chinese origin said to have arrived when the Chinese-Muslims moved into the city. The curry is what makes it Muslim while the noodles make it Chinese. The combination of both makes for a Northern Thai specialty that's become an ambassador dish for the region. Though I also remember reading it's similar to a Burmese recipe called ohn no khao swè. It's one of those things where multiple cultures intermingling made for a dynamite dish. The thing is it doesn't quite get the attention in the States that it deserves. Well that may be changing with the help of spots like Three Wheels. This was a damn good bowl of curry noodles. I'll come back and get it again. Bc Khao Soi is so popular in Chiang Mai there's many different ways its made. There isn't one right way which is why you can easily enjoy this bowl even if it's not just like the one at your favorite spot in Thailand. It's good enough to trigger those memories. 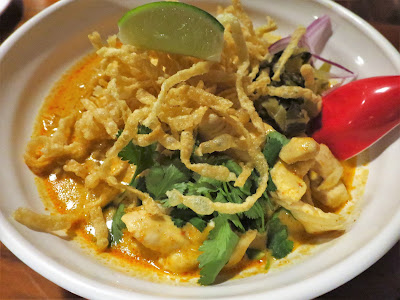