Today's stop is all the way out in Schaumburg. So if you're headed to Ikea anytime keep that in mind. That said there's now a second location of Egg-O-Holic in the city at the corner of Halsted and Chicago. The original location in Schaumburg shares the same strip mall as the mighty Patel Brothers Grocery as well as a host of other Indian owned businesses. The focus at Egg-O-Holic as the name would suggest is eggs. All day and in pretty much every menu item. Owned by a couple of guys who grew up India and according to the website always looked forward to egg night. India if you didn't know has a special thing with eggs. Some of the best egg dishes out there come from India. 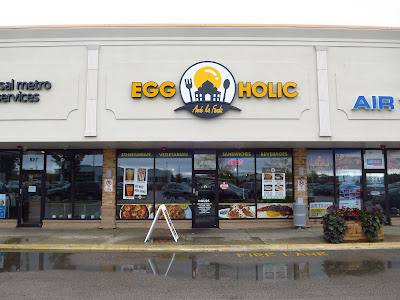 The menu at Egg-O-Holic is a dictionary of Indian egg dishes. I didn't know what any of them were but they all sounded good. One of the most popular I had read was Bhurji which is a dish commonly enjoyed along India's highways and rest stops. But there was a picture of what looked to be sunny side up eggs sitting in a pool of curry and this is what got me in one trip out to Ikea. It's a dish called Suri Gotalo. Described on the menu as "shredded hard boiled eggs mixed with sunny side up in our special ‘Holic’ spices". It's nothing I'm even remotely familiar with but that didn't stop me from enjoying it. I was offered toast or roti and took toast which tasted great dipped into the potent curry like sauce. Every time I'm introduced to regional Indian dish such as this I have the sudden urge to pack my bags and take off for India. Easier said then done but one day I'll make that into a reality. 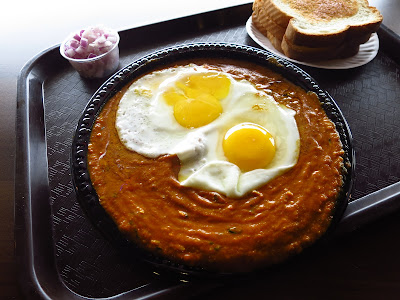