Eating like a local:
Regional food specialties
-Where WI meets MI in the U.P and the food they eat

Some chow from the Upper Peninsula of Michigan this past summer. I like to post about spots during there prime season, however. I can still share these spots here today since this area is also alive during winter with people skiing and snowmobiling. It really doesn't matter what season this area is a beautiful place with plenty of lively outdoor activities. 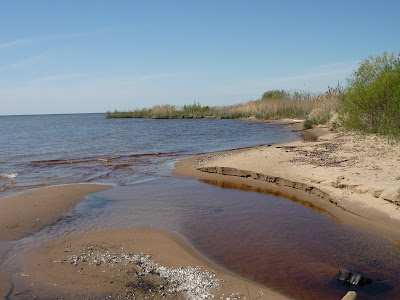 The Pass-ty, Paste-e or whatever you call it is something I'm not sure why I like but I eat. Simple flavors and somewhat bland I still like a pastie once or twice a year when up that way. The breakfast ones if offered tend to be much better but both these places featured here today were without them on my visit. I stopped into the U.P Pasty Express when riding by while taking a cruise to Lake Superior from the Northwoods of WI. I guess the main reason I'll get a pastie is b/c of the reason they were made for the miners. They're fine if you eat them an hour or three after you get them and both these ones tried were eaten when I got a little hungry while along the lake. 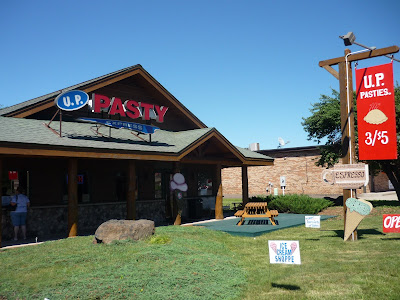 Miners special (beef, potatoes, carrots and rutabaga)
Well as seen in the pic above the potato to beef ratio is about 90% to 10 and the taste was so damn bland I used the ketchup it came with to liven it, I don't use that sweet shit on fries. I would of enjoyed it much more if I was working in a cave mining coal, starving hungry on the 2nd part of a double day/night shift. Dobber's was a place I stopped in at while up in Marinette, WI. This location was in Menominee, MI right over the WI/MI border. I liked theirs better than UP Pasty due to there being a tad more beef and enhanced flavor with the side of gravy it came with. I don't know why but I'll probably order a pastie the next time I pass a place in Yooper Land that sells them. I just hope they arent out of breakfast ones. 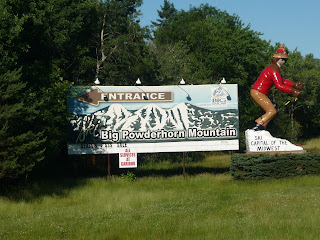 An Old Family Vaca favorite
Next stop was a place we found while driving along the lake near the WI/MI border last Spring. Jozwiak's looked like a classic Midwest tavern from the outside. The fact they've been around since 1948 and that there was a nice pizza aroma outside along with plenty of cars in their lot made it a stop despite not having much hunger in me. 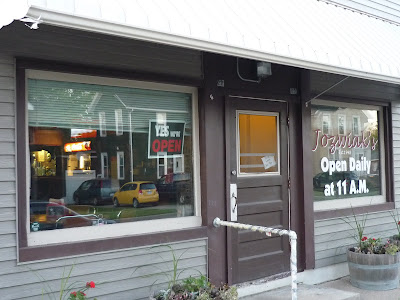 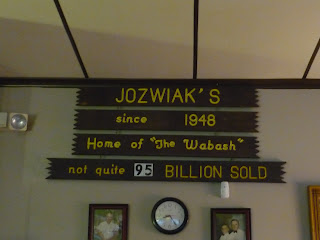 Oh boy, whats that? Gonna have to try one of them too now...
Well if there was any night to stop in when I wasn't all that hungry, the night we went was it. It turns out the Wabash is their famous burger and on this night the special was a small, one topping pizza, two Wabash's and two drinks for $11 and those drinks can be beers. Not bad especially since the other fellow I was with, an amateur when it comes to chowing with the King, wasn't able to withstand any more food after the order was placed and thus left before it arrived. 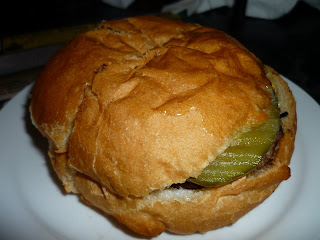 The "Wabash"
Which left me with two burgers, two beers and a small pizza pie. Not bad for cheap tavern eats. The Wabash is a double cheeseburger served in the same way of many places in Wisconsin along Lake Michigan such as Mickey Lu's (report coming soon) in neighboring Marinette. I didn't see a real charcoal grill on display but the patties are charred and placed inside a crunchy toasted semel hard roll and topped with a nice chunk of butter and slice of Wisconsin cheddar. Pickles, ketchup, mustard, onions and relish are your options. 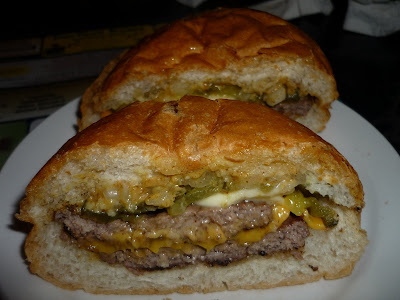 The pizza was also pretty good especially for the price. 'The brothers three' was a place started in Marinette, WI in 1972 which was started by The Brothers Three who's original place is in in Cicero, IL. So they say the pizza made at Jozwiak's today is the same recipe the family used in 1962 at their pizza place in Cicero and the other WI locations. Good tavern thin sausage pie, worth the stop on a trip into the UP thru Wisconsin with the fam or friends. 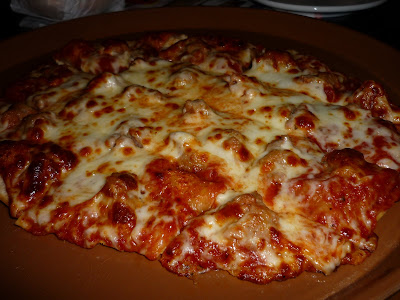