As any meatball American would tell me I'm not supposed to like anything about the French. But you gotta give it to them on their classic dishes in the kitchen including one of my favorite soups. French Onion Soup is something I usually order out and it can either be really good or very bad. If your at a steakhouse or very good classic French bistro it's usually great but other places it varies. I decided to go ahead and dip into the 2-3 day process of making a real deal batch of it. The most important part is the beef broth. So for this I made my own which is pretty easy.

1) Take your beef soup bones and place them on a oiled baking dish and cook them at 350 for an hour.

2) Start out by lubing the bottom of a pan and proceeding to brown the beef neck bones on each side and then set aside. 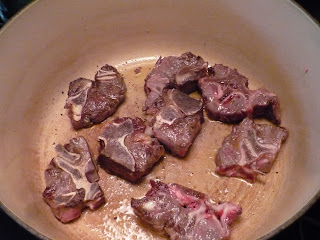 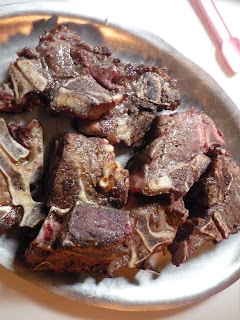 Beef Neck Bones
Note: You can eat the meat off the beef neckbones as a snack or use it in another dish as I did.

2) Once the neckbones are browned and removed add water little by little to pot and scrape off the black bits on the bottom and then add the soup bones and half water and the other half beef stock to your pot (use a bigger pot and fill it 3/4 way). Proceed to add the quartered onions, carrots and celery as well as the salt and pepper and bring to an almost boil and then turn the heat down and let it simmer for at least 4-5 hours.

Note: It's best to let your stock sit overnight which is why you should always make the broth a day or two ahead. After it sits in the fridge for a few hours a layer of fat will form on top. Remove this but save it for cooking.

Please Note: I used what I liked from two recipes including one from LTHforum via Cook's Illustrated and the other from what's said to be the recipe for Barr's (St. Louis) French Onion Soup.

1) Preheat oven to 400, with rack in lower-middle position. Spray the inside of a dutch oven with nonstick spray. Add beef fat, butter, onions and 1tsp salt. Cook for an hour, covered, and then remove and stir, scraping the pot. Put it back in the oven with the lid off just a bit and cook for another 90-105 minutes, scraping at the hour mark, until the onions are brown and very soft. 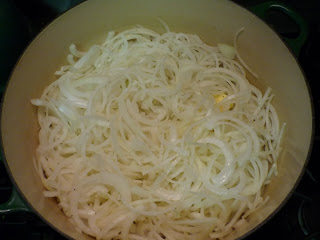 Onions just added in
2) Remove the pot, put it over medium-high heat, and keep cooking for about 15-20 minutes, or until all the onions brown and the liquid evaporates. Keep cooking for another 6-8 minutes until you have a dark crust on the bottom, and then add 1/4 cup water and deglaze. Repeat this deglazing/evaporating process two or three times, and then stir in the sherry and let it cook until it evaporates again. 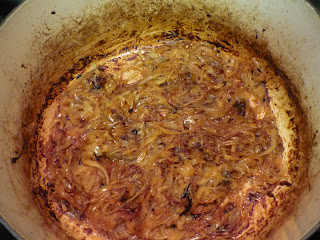 Onions just about ready
3) Add all the broth, two cups of water, thyme, bay leaf, and 1/2 tsp salt and deglaze again. Bring to a simmer over high heat, and then reduce the heat back down and let it simmer (covered) for 30 minutes. Throw away the herbs and season with S&P. 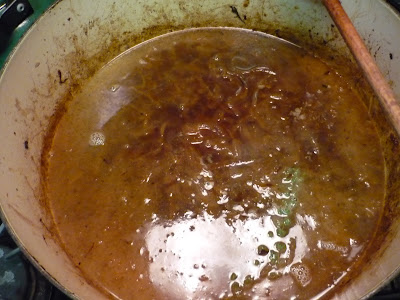 4) To make the croutons, bake the baguette slices on a cookie sheet in a 400 degree oven for about 10 minutes, until dry and golden. 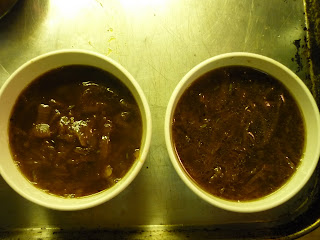 Soup in the bowl before bread and cheese 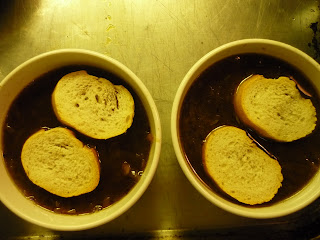 Before the layer of cheese goes on top
5) Fill broiler-safe crocks with soup, top with baguette slices, sprinkle with gruyere, and broil for about 3-5 minutes until the cheese is melted bubbly, and then let it cool for another five minutes. 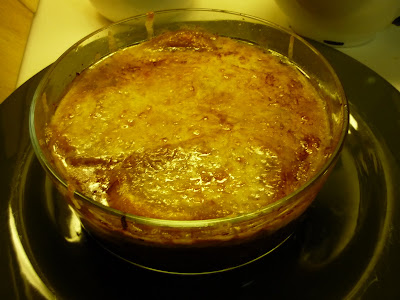 1) Bake the potatoes until done and let cool in fridge. Then make your beef gravy. I made mine from the beef fat rendered from the stock using a traditional recipe for gravy. 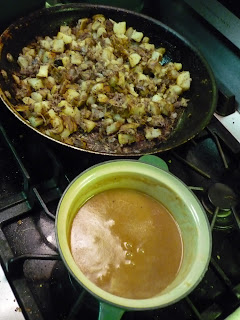 A different take on a French Canadian favorite
3) Two minutes before you turn off the heat, add the cheese and toss it around. Add desired amount onto each plate and then top it with gravy. 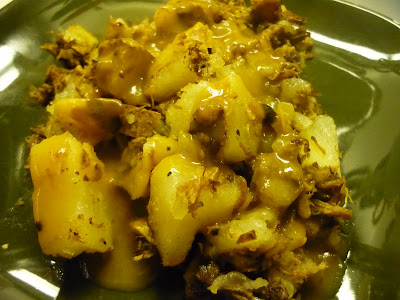 See ya next time @chibbqking
Posted by KingT at 1:11 PM