-Got Beef? Italian Beef
as seen on 'What's Your Beef?'

With cold weather coming you can expect constant beef with hot's over at it's homebase. Around sometime last year I was informed of a newly opened beef spot in Berwyn called Brando's. As many Italian beef focused food stops as Chicago has there arent tons that focus on da beef that open up. Many and most of the stands that have already been reviewed on here have been around a while. When a new beef place opens up it tends to be franchised Al's or maybe a Pop's or Buona. I had Brando's on my mind since I was informed about it but never made it until just last month. Lets take a look. 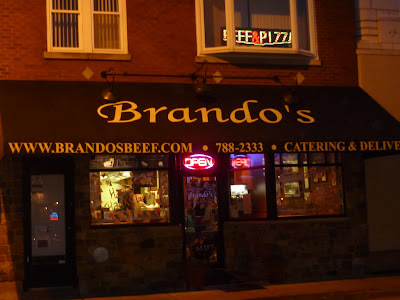 Brando's is a family run business that feels like they've been there forever. The staff was joking around and obviously enjoyed each others company and there was a family there for dinner and a few regulars who came in and took orders to go. Brando's menu includes other options like pizza and whats supposed to be a very good meatball sandwich but this being my first visit I was there for the beef. I went with my usual beef with hot and also an order of the fries which came with heavy praise from those who had already been. What took me so long? I thought this was one of the better beefs I've had of late. The gravy had depth to it (wasnt from a can or a bag) and the beef was excellent, made in house and finely sliced, it melted on my tongue. Those were the best parts to it while the bread was very good and the peppers were ok. I doubt they make the giardinera on site but it didn't detract from this classic example of a Chicago style Italian beef sandwich. If they can be consistent it's gotta be considered one of the best. 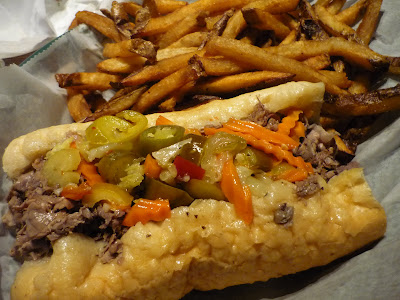 Damn, a new joint receives a 17 right off top! If I didn't know any better, I'd say T is gettin soft on us... jk this speaks volumes to this beef and since its just two towns over, I'm gonna have to hit it up for some juicy eye-talian love.

Thanks for the report

The picture speaks for itself!!