With the recent post on Philly sandwiches here on the site followed by a big Bears win this past Monday night, it's only fitting we show some love to the home city. Today we go to Don's Drive In on Kedzie between 77th & 78th streets in the Ashburn neighborhood on the city's Southwest side. While I haven't been able to get an exact date I do know they've been around for a while. It's long been a neighborhood favorite for this blue collar working class community and also a lunchtime hot spot for the workers at the Nabisco factory down the block. 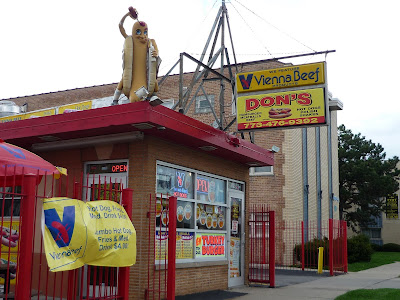 A locals favorite in the Ashburn neighborhood

Although not a working drive in it signifies the old school Chicago style hot dog stand with it's small walk in space where you go to place your order along with a few tables outside to eat. Otherwise it's in your car or on the hood if it's nice out. Don's will catch your eye if your driving by with their cool little building with a hot dog man standing on top. The only problem is the hot dog is committing suicide as he seems to be spraying ketchup onto his head. As you 'drive in' to their lot your also greeted by a large burger on display which they purchased from a now demolished Drive In in from the suburbs. 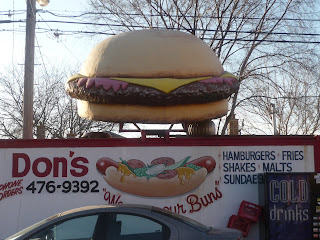 "We Move Our Buns"
Don's has a pretty large menu for such a small space but most people are there for their hot dogs and Polish sausage. Some people I have seen do get burgers, steak sandwiches and some of their other offerings too but the Vienna Beef encased meat is where its at. Although I prefer my VB's in natural casing form I still love the dog at Don's. They're Chicago Style to the fullest with the only little twist being they use sliced cucumbers as opposed to pickles. Everything else associated with the better known of the two Chicago style's is on there including the poppy seed bun. 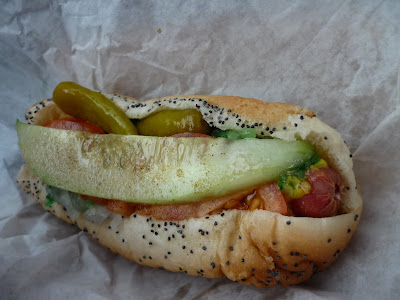 A Chicago Style with everything from Don's

My preferred choice at Don's is the Polish sausage, particularly the Fire Polish. That's the one that comes fried (the regular does too) with the works. I believe the name for it comes from the neighborhoods local firehouse and the past firemen from there that loved it although don't quote me on that. Yes I do prefer my Polish with just grilled onions (lots), mustard and sport peppers but how could this be bad? It's a deep fried Polish with Chicago style dog toppings. You gotta love Chicago and all the classic neighborhood hot dog stands that have survived the times. Woa! I'm Love in it. Actually i don't like hot dogs much to eat. But by reading this i want to try this Mexican food. Thanks a lot. I like Italian and Chinese specials mostly in this DriveIn Restaurant.