When I first started exploring Chicago and it's food gems there was a place we would go to often, especially on Tuesday nights. I found Candlelite when searching online for good tavern thin style pizza joints. On top of the classic neon sign they still rock the rec's for the place were enthusiastic and many people love it and so did we. On top of that another common trait amongst great Midwest tavern thin pizza places is most have been around since the 50's, if not before that. 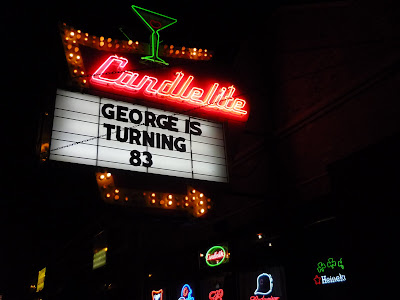 Candlelite opened up shop in 1950 and they've been a fixture in the neighborhood since then. The inside is nice and most likely been redone more recent than not, it's not quite as old school inside as the neon would suggest. They have a real nice bar, big flatscreen TV's as well as tables for people to sit at. Tuesday nights is 2 for 1 pizza. They specialize in Midwest thin and do good job at it. The biggest problem for me has been consistency and I have the pics to prove it. You'll see that the first picture of a pizza, while still "thin" is not quite tavern thin. That was the case a couple years back as the pies switched. Still good just not why it was a repeat pizza stop for me. 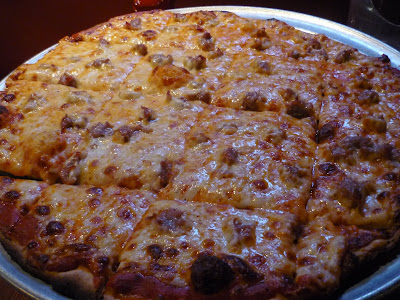 One thing that has always remained the same and is a must get while there are the garlic fries. These are some of the best sets of fries with toppings in the city. They load up the fries with a really nice housemade garlic concoction that goes great before a pie or even as a snack if your just sitting at the bar, watching a game and want something to munch on with your beer. They do have other options on the menu but the garlic fries and pizza pies are all I ever order. 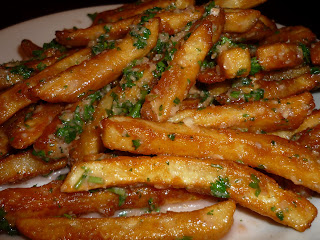 Garlic Fries from Candlelite
So after taking a little break from there I tried it again this past winter and it was much more like it was when I first started going as opposed to what made me take a break. The crust was much crunchier and thinner as well, the way I like it. An inch or two might not seem like a whole lot but when making a pizza tavern thin, its important the dough be made into as thin as possible to create an authentic tavern style pie, which in case people didn't know is true Chicago style. Check the tags below for more places in Chicago and the rest of the Midwest to try this popular regional style of pizza. See ya next time @chibbqking. 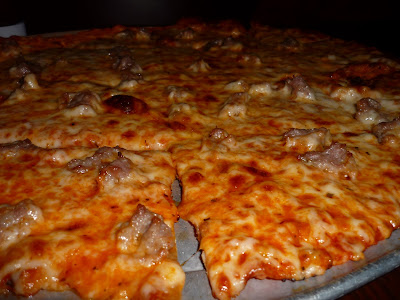 My most recent thin crust sausage from Candlelite

Nice tip on the garlic fries, I'll have to try those next time I'm up there.

Do you have any other preferred spots for this type of pizza on the near north and west sides? My local place is John's on Western at Charleston in Bucktown. I created a thread on LTH a couple of months back, it's pretty good, but especially as the winter hits I'm definitely looking for other options in the vicinity.

I like D'Ags but the one at Chicago/Milwaukee isn't as good as the Wrigley location.

Whats up Ben, thanks for peaking. My tavern thin go to is and always has been Pat's Pizza on Lincoln in LP, they used to be on Sheffield in Wrigleyville back in the day but moved a decade or so ago.

Its one of the top tavern thins in all of Chicagoland

I used to hang out there in the early 80s, waiting for my buddy (who made the pizzas) to get off work so we could hit the clubs. He streched the dough so thin you could almost see through it in spots, and told me the trick was to use minimal homemade sauce - just a splat smeared around with the ladle - so the crust wouldn't get soggy.

Back then it was a dumpy single storefront more befitting that cool sign they still have. Hasn't been the same since the secret got out...

Photo Retouching is one of the most impressive services in photo editing. It helps to bring a positive vibe and look on the photos. Most of the end-level users are in great needs of Photo Retouching Services. But you need to be careful while selecting the best one.
Chat conversation end
Type a message...

Photo Retouching is one of the most impressive services in photo editing. It helps to bring a positive vibe and look on the photos. Most of the end-level users are in great needs of Photo Retouching Services. But you need to be careful while selecting the best one.
Chat conversation end
Type a message...