Regional Fast Food
-Lou's and it's presence in Chicago

In case you were wondering, oh yeah I've been to Lou's too. Regular loyal readers will know that my preferred style of pizza is the other Chicago style - tavern thin - but that doesn't mean I don't enjoy me some Chicago style deep dish. Whether its deep dish, stuffed, tavern thin or pan, we are blessed to have so many styles of pie in the Chi and the famous Lou Malnati's is one of the reasons for this. Founded in 1971 by Lou himself who worked in Chicago's first deep dish pizzeria during the 1940's. After perfecting the art of the deep dish pie Lou then took his talents to the suburbs where he opened Lou Malnati's Pizzeria in Lincolnwood, IL with his wife. Lou was a character, heck he was an Italian that opened a pizzeria in a Jewish neighborhood on St. Patrick's day. He not only made many people in Chicago's favorite pizza but he was also one of those guys that made his customers feel at home and they stayed loyal to him. A second location opened in Elk Grove got off to a rocky start but eventually prevailed. Lou fell victim to cancer in 1978 but his family has continued his tradition and Lou's is now as much a part of Chicago as anybody. 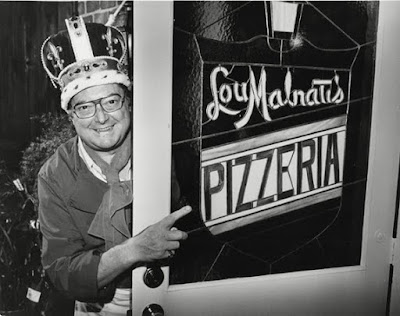 Lou Malnati at his original location (Pic from chicagonow.com)

Birthplace: Lincolnwood, IL
Type: Family Owned
Founded in: 1971
How Many Today: 31
Locations in: IL (Chicagoland area) with delivery available across the USA
Menu item that made them: Chicago style deep dish pizza

Even though I'm not the biggest fan of deep dish I am a huge fan of Lou's. This is the one place I really enjoy deep dish. I've been a big fan since my grade school days and going to the original location and then they opened a spot in Lincoln Park right by me and it became part of my rotation. As Lou's describes their pie "The dough is patted out by hand and raised up high on the sides of a seasoned deep-dish pizza pan. True Chicago style pizza actually has a rather thin crust that compliments the delicious toppings. The order the ingredients are placed on a Chicago style deep-dish pizza is “backward” from a thin crust pizza. Chicago style deep-dish pizza is made with slices of mozzarella cheese that are placed directly on the dough. Then additional ingredients like mushrooms, onions and sausage are spread on top of the cheese. The pizza is then topped with a fresh tomato sauce made with whole chunks of pear and plum tomatoes and topped off with a sprinkling of cheese and spices."

One thing about Lou's for me is I always want it the same way which is different then my typical cracker thin sausage pie. You got to get your pizza with the butter crust from there which is just when they slather the crust with melted butter. I also prefer pepperoni on my deep dish pies instead of the sausage layers. Whenever I'm feeling like a pizza that needs to be eaten with a knife and fork Lou Malnati's is my choice. If your not in or near the Chicago area you can ship the pizza anywhere in the United States thru their website. 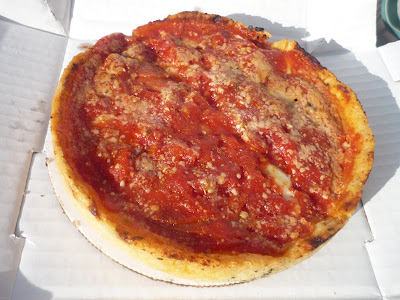 Thanks so much for the fantastic write-up! We hope to see you soon!