Its well documented here at S'C'&C that I am a big fan of the "other" Chicago Style Hot Dog as I like to call them. Others call it a "depression dog" and then some use the term "minimalist" hot dog. One thing all supporters of them can agree on calling them is da best. Its the style of hot dog I and many native Chicagoans grew up on. There isn't a better regional hot dog variation out there and that's just the way it is. Nowadays there are less and less places that serve this real Chicago style but luckily there's still a handful that do hot dogs up right and today's stop, Gina's in Bensenville, is one of these spots. 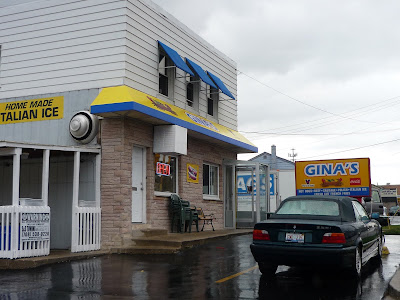 Along Irving Park rd. in the suburbs

If you take Irving Park rd. and head West you'll eventually end up by Gina's which is a favorite of the people for hot dogs in the area. The menu includes some other items and they have Italian ice as well but the dogs are what you get. Just like the rest of the purveyors of the old school Chicago style dog, Gina's uses a natural casing Vienna beef wiener which is a must for this magic. The hot dog is placed is a ordinary steaming white hot dog bun and is then topped with mustard, chopped raw onions, relish and sport peppers. Last but not least the dog is then topped with a large amount of fresh cut fries (which are included and also a must for this style) and its all wrapped up into butcher paper. The only thing that's a little different about Gina's is they use a neon relish which isn't what any other places that serve this style use. Either way if your ever driving by Gina's its a great pit stop for a quick, cheap and excellent lunch that's true Chicago style. 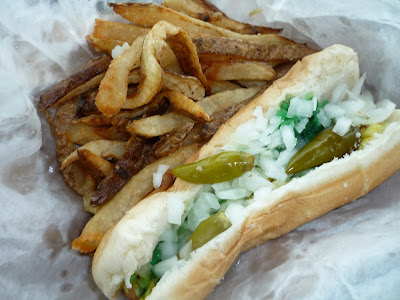 Gina's dog with everything

Appreciate the flood of Chicago posts. Gina's looks like a good example of the depression style, not sure I'll ever make it out there, but it's good to know that these places are still going strong.