It was a pretty exciting episode of Top Chef NY this past Wednesday. By the looks and complements of all of the judges including Emeril it seemed that the final four and Jeff did a nice job representing New Orleans Creole/Cajun cooking. In the end it was one half of team Europe getting the boot as Fabio was made to pack his knives and go. Sorry Fabio but you just couldn't leave the Italian aspect out of it. Truth be told it should of been Stefan to go based on that sole performance but I guess his past performances are what got him to the final plate. One of the most pleasant smells in your kitchen can be shrimp creole. It fills the air with a heavenly scent when you put your soul and love into making a real creole. This is a dish that would of had the judges out of their seat. Today there are so many bastard forms of shrimp creole that if you want a real one you got make it yourself and this especially holds true for those of us living outside Louisiana. I found this recipe over at NOLAcuisine.com where they have nothing but fantastic recipes for any upcoming Mardi Gras parties you might be having. I highly recommend browsing this site for some ideas. I documented the making of the shrimp creole and it was my favorite dish I found on the web this year.

"There are a lot of good and bad recipes for Shrimp Creole out there, hopefully you will enjoy this one as much as I do. The defining factor that I think makes this dish great, instead of just good, in addition to the use of the highest quality Louisiana or Gulf Shrimp, is using homemade Shrimp Stock in place of water during the preparation of your Creole Sauce. " NOLA Cuisine 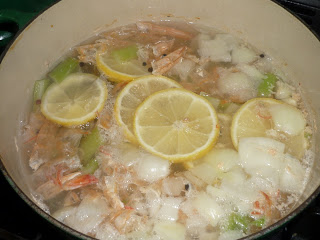 "All that aside, on to the dish…

As I see it, Shrimp Creole and Shrimp Sauce Piquant are pretty much the same dish, with a few differences.

First, Shrimp Creole, or as it was once known, Shrimp a la Creole, is a New Orleans dish. Shrimp Sauce Piquant is Acadian, much spicier (hence the name) and usually, but not always containing a roux. But as I said, they’re pretty darned similar, and like most dishes in New Orleans these days the two cuisines have kind of merged in a lot of different areas. Like any dish that there are a trillion recipes for, it’s all a matter of your personal taste." Nola Cuisine

Melt the butter in a large sauce pan with the vegetable oil over medium high heat. When the butter begins to froth add 1/2 cup of the onions. Cook, stirring occasionally, until the onions are golden brown. Add the remaining onions, celery, and bell pepper, reduce the heat to medium and season with 1 Tbsp Creole Seasoning and a healthy pinch of salt. Sweat the vegetables until soft. 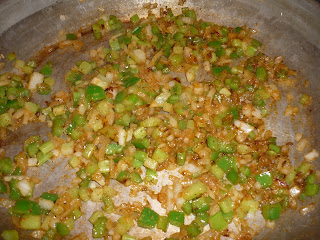 Add the tomato paste mixing well, and cook, stirring constantly, until the paste begins to brown, then add the fresh tomatoes and another healthy pinch of Kosher salt, this will help the tomatoes break down. Stir well. 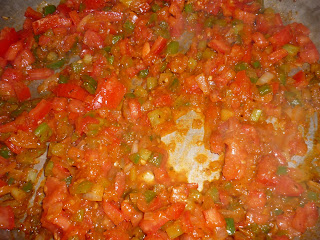 When the tomatoes start to break down into liquid add the white wine, and turn the heat to high until most of the alcohol burns off. Add the Shrimp Stock, remaining Creole seasoning, garlic, bay leaves, black pepper, white pepper, cayenne (to taste), and Thyme. Bring to a boil then reduce to a low simmer. Simmer for 30-45 minutes. 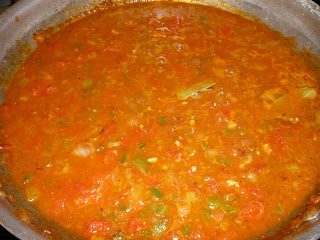 (If necessary at this point thicken the sauce with 1 Tbsp Cornstarch/ 2Tbsp water. Bring to a boil to maximize the thickening power of the cornstarch.)

Add the hot sauce, Worcestershire, and season to taste with Kosher salt. Last chance to re-season your sauce, remember that good cooking is all about proper seasoning. Make your Boiled Rice, and season your shrimp with 1 Tbsp Kosher salt and a pinch of Cayenne.

Bring the sauce to a boil, reduce the heat to low and add the shrimp. The key is to not overcook your shrimp. Let them slowly simmer in the sauce until just cooked through. 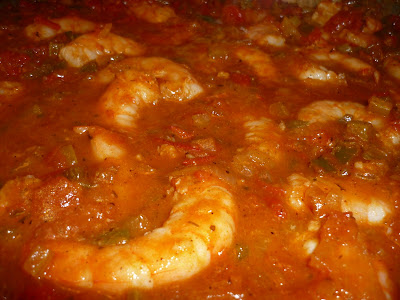 Serve with boiled rice and garnish with the remaining green onions and parsley. 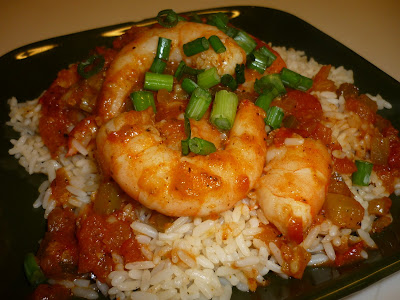 Whoa! This is delish! I really would love to taste this but the only problem is my food allergy to your main ingredient to this recipe to bad. Anyways, where is this recipe made from. I'm more into Italian cooking and love Italian foods. How about you?