Al & Joe's "Home of the Submarine"

If Italian Subs are your thing then my bad for not getting to them earlier but I'm a one man team here folks. I have 50+ places Im waiting to post about as well as the ones I hit up as time goes on making that list grow bigger by the day. I am a huge fan of Bari and have been eating those sandwiches for my whole life and its time is coming but first is a spot that is relatively under the radar. Al & Joe's is literally at the end of Addison st. right before Manheim Rd in Franklin Park and has been there since 1960. I randomly drove by this place when I was waiting out a flight delay at O'Hare and upon seeing it, knew I had to try it. Its looks as though much hasn't changed and you get the feeling from the outside that its right up my alley. A&J's is a deli that doubles as a mini grocery selling convenience goods and booze opening at the crack of dawn at 5am. It also has a restaurant connected next door that serves pizza, pasta and beer where you can eat the fresh hand made sandwiches on site. 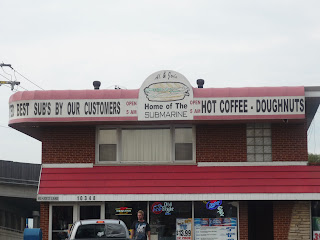 Right in the middle of the store is the deli counter where they have a nice offering of sandwich's ranging from an Italian, mile high corned beef, meatball/sausage, chix-parm, pepper & egg and the usual deli cuts. They use fresh gonnella bread and the turnover rate is fast and the fresh sliced meats paired with the homemade giardinara is one of the best sandwich's in Chicagoland. They also have homemade dessert's like canoli in the display cabinet at the register. I have only tried the Italian and a "Mile high" corned beef which is the special on Wednesday's for $6 and they have a daily special everyday that includes a sausage and pepper, meatball and some other promising offerings. I haven't been disappointed yet, the pastas looked to be huge portions and the chicken parm also looked and smelled really good but I just found this place a couple months ago so I have only been a few times when traveling around O'Hare airport to pick up or drop off people. 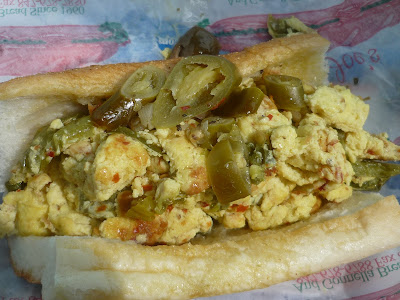 On the way home one day I stopped and picked up a lg. Alpine sub (a favorite amongst locals) to compare with a large A&Js sub and there was no comparison. The alpine sub was half the size with half the ingredients that were less quality and the bread was much better on the sub from Al & Joe's as were the hot peppers. Great place to stop before or after a flight out of O'Hare. If your coming from the lake just drive down Addison til you get to the end where it meets with Manheim Rd (It gets cut off by a forest but you can go around either way and turn back onto Addison) As far as Italian subs go its right up there behind Bari but better than the rest I have had, the oil mixture is great with the homemade hot peppers and the meats/cheese are sliced fresh upon ordering and they don't skimp on ingredients here. For the adventurous eater I would recommend you try a "Herbie" which is an Italian sub with double the meat. They already pile the meat high so I cant imagine how big this behemoth must be. I'll tackle that next time I get to eat lunch there. 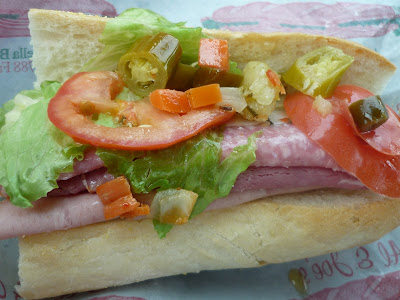 Anyone that wants to bring some of their "secret sandwich sauce" which is just their homemade giardinara to a friend upon leaving O'Hare or back home with you to your pantry, they sell two sizes at a really cheap price with the smaller jar being only $2.29 and the lg jar $3.49. Its really good stuff some of the best in the city and the sammy is better than anything you'll find in the airport. I really like this place so start showing them some love when your traveling around the airport.

OMG, I haven't thought of Alpine Subs in ages! I used to work in River Forest and that was a frequent lunch time run.

Looking forward to checking out your site!