The East Side of Chicago has to be the section of Chicago most stuck in time and thats a good thing. Located on the south side of the city between the Calumet river and the Illinois-Indiana state line not much has changed thru the years over there. Its the best neighborhood to get a feel of what Chicago was like way back in the day before redevelopment. Until recently the area was economically dominated by the river and the once thriving Port of Chicago. Most of the houses are the unique to Chicago bungalow style and most buildings were built pre-1920 and many of the businesses have been around for quite a while as well.

After the great Chicago fire of 1871, Joseph Schlitz donated thousands of barrels of beer to the city and decided to open a national distribution point in the city that would begin the Schlitz brewery expansion. The German immigrant who came to Milwaukee Wisconsin at 20 years old in 1820 built dozens of tied-houses in Chicago after the fire in 1871 and all had a concrete relief of the company logo embedded in the brickwork. Several of these Tied-House buildings survive today and there are a few located on the East Side giving you that old school feel as you drive by. Many of the neighborhoods settlers were people of Croatian and Serbian descent who had emigrated from Europe to take jobs in the steel mills and related work. After the unionization, the neighborhood became a stronghold for the Chicago democratic party machine of mayor Richard J. Daley. Today the area is still heavily populated by Hispanic, Serbian, Croatian and Polish people.

Schlitz' stamp on the old tied-houses around the city can be...

...found around Chicago and Wisconsin (Southport lanes in Lincoln Park) 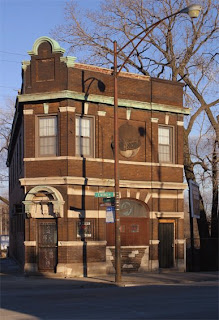 Along 106th St. in the East Side neighborhood there are still several old business that have been family owned for a long time but none have been under the same ownership for a longer running period than Harmony Hamburgers. Its your basic old school Chicago style grease grill thats been doing it the same way since they first opened doors in the early 1950's. Owned by a lady who's son has a law practice around the corner its a restaurant thats truly all in the family. There is very little information on this fascinating old school burger shop on the internet but over at LTHforum.com there is a small mention of it in a thread about another place. The post is from 2005 and reads "BTW, was reading some paper while there waiting for my tacos the last time, and it mentioned "Harmony Hamburgers" on 106th, apparently been in existence since 1953 or some such, 79 year old woman running it and currently being helped (over summer) by 10-12 yr old grandkids etc. Ever tried it? Any good?" 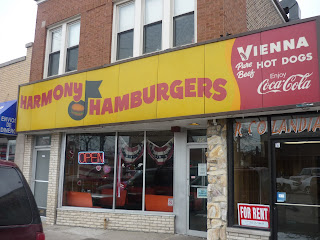 106th streets oldest business in the East side neighborhood

One member of the food board who is the Columbus of south side food exploration had stopped in for the first time in years circa 2005 and said "Nothing has changed, in fact I doubt much has changed in 50 years." The family has a longstanding history in the neighborhood and the walls are covered with photos of family members with people ranging from Hillary Clinton to Mayor Daley to Digger Phelps with a definite Notre Dame presence. I think the owners son went to college or law school at ND. There are a few game machines with prizes for the kids to play as well as an original Donkey Kong arcade game to the right as you enter. On my first visit this past weekend I got the same feeling that was felt above, the place hadn't changed in years it looked and felt like a classic Chicago fast food neighborhood joint. I visited on a Saturday and the description above of it being all in the family was spot on to this day. The mother/grandma was there keeping up shop with her son the lawyer and his daughter (her granddaughter) a young girl, maybe 7 or 8, who was taking care of the tables and delivered us our tasty burgers with a cute little smile on her face. There were also a few neighborhood kids who rode their bikes over for lunch, some regulars as well as the employees who all seem to have been there a substantial amount of time as well. Everyone was enjoying their Saturday afternoon and everyone knew each other it felt like real Chicago. 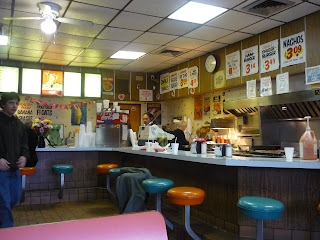 View upon entering with the kids games to the right

When I first caught eye of this place a few weeks back I knew I was going to have to stop in and try a burger in the near future. I imagined that by the looks from the outside that they made a good old fashioned burger the same fashion since the day they opened and like usual I was right. It was a basic fresh thin patty griddle cooked and topped with potent grilled onions and perfectly melted cheese on a sesame seed bun. I went with a double cheese with my preferred toppings of mustard, onions and pickles (I don't do ketchup on anything) that included fries and at $3.49 it was everything you could expect it to be. It was a perfect rendition of an old school cafeteria style burger but done right. Although I wasn't hungover I could tell that this place was a popular stop for locals who had been out late enjoying the previous night. As far as the taste goes I bet it hasn't changed since the day they opened and thats why its such a satisfying burger. It reminded of a place thats long gone that I ate at growing up in Lincoln Park called Glenn's Hamburgers on Fullerton just east of Ashland. Nothing fancy about this place just a good greasy burger that taste like burgers used to back in the 1950's or so I'm told. I'm only 27 years old but I can taste the history and harmony put into these babies. They were very pleasing on the taste palate. I'm glad to have this place on my radar and you should put it on yours. Its a great stop for lunch on a trip up to the Michigan City/Michigan area during summertime fun for us FIB's. 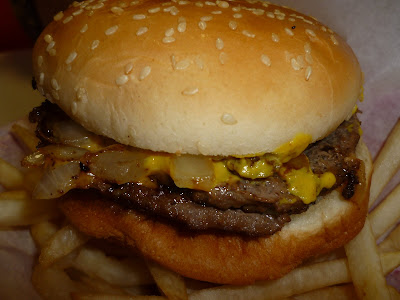 Double cheese with mustard, onions and pickles from Harmony

Strengths: The Chicago history behind the burger stand and the people that run it in the historic neighborhood is enough to make it destination dining alone. The fact that the burger tastes like its stuck in time is a huge plus. Brings back memories of the burgers you ate growing up, the places that are becoming more and more a rare breed in the days of McDonald's and other bad burger franchises that are popping up everywhere.

Weakness': I cant find a single bad thing to say about this landmark burger establishment. The only way you wont like it is if you prefer to go to a squeaky clean place that was built post 2000 like Culvers or Steak & Shake. Not to take away from the burger spots that somewhat try to do it right but Harmony hamburgers is what the original Culver's and Steak & Shakes were like. They just haven't changed since day one. The Great Burgerelli is getting beat down in reviews of burgers in this town. Keep trying though.

I AM LUCKY ENOUGH TO HAVE GROWN UP

I HAVE EATEN "HARMONY HAMBURGERS"

AT THEIR CURRENT LOCATION AND THE 2

PREVIOUS ONES... WITH PLEASURE...

THERE IS NO BURGER THAT HAS THE

UNIQUE FLAVOR IT HAS... MY MOUTH IS

DOWN TO EARTH HONEST TO GOODNESS

IT REMAINS IN MY HEART AS A

PRECIOUS MEMORY OF MY LIFE GROWING

LEAVING CHICAGO SOON BUT I WILL

STOP AND ENJOY A

"HARMONY HAMBURGER" ONCE AGAIN, I

YOURSELF NEAR BY AND HUNGRY GO IN..

I LOVED HARMONY HAMBURGERS!! MY FRIENDS AND I USED TO GO THERE ON SATURDAYS AFTER B-BALL PRACTICE AT CAL PARK. IF I EVER GET BACK TO THE EAST SIDE, MY HOMETOWN, I WILL DEFINITELY TAKE MY KIDS!!! THE BEST BURGERS AND SHAKES !!!

HARMONY'S IS DEFINITELY ON MY AGENDA FOR MY NEXT TRIP TO THE EAST SIDE, WHENEVER THAT MAY BE. ITS THE BEST.

Memories from a hunnerd 'n sixth an Ewing:
Harmony's (you don't need to say 'Hamburgers) was an East Side staple. They started out with a trailer directly across the street from where they are located now. The place was mobbed after a football game from SFDS or Washington. I can still picture old man George with the paper hat on his head behind the counter. The shakes were great and the hot dogs were fantastic. I can still taste the pickle and celery salt from my Chicago dog. Just to sit there and watch those beef burgers sizzle on the grill. Yea, baby.

My husband is from the East Side and introduced me to Harmony Burgers, a place that he and his father both worked when they were younger. When we go back to Chicago the first place we have to eat is Harmony Burgers. That's our first stop. Georgia recently past away, fortunately I was lucky enough to meet her, she was one of the nicest people I have ever meet. I hope the boys keep the place going so we can make our first stop. :)

Spent many an hour up at Harmony's back in SFDS grade school and GWHS. I love that it's still there.
Karen

I worked there as a student serving and making hamburgers. Mrs C was struck but honest. 85. cents a hour was a good wage back then but the real benefit was eating the best hamburgers. SPOILER ALERT: seasoned salt when cooking the burger is the secret !
enjoy.