I've never been to Brazil but it's near the top of the 'to visit list.' The cuisine of Brazil is influenced by a wide variety of cultures and like most large countries the food can be very regional. Chicago has a small Brazilian population compared to a place like South Florida but there's actually a handful of Brazilian restaurants the newest of which is Recanto Brazilian Grill on Belmont in Lakeview. 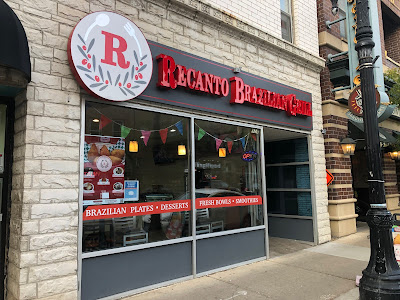 Newly Opened in Lakeview
The menu at Recanto features lots of traditional Brazilian favorites such as feijoada and pichana steak as well as frango a parmegiana. Each one of those Brazilian classics is influenced by different groups of immigrants. Another popular dish in Brazil that has it's origins elsewhere is stroganoff. Originally a Russian dish it's also popular in France and Brazil where Russians and French people emigrated in the 1920's following the revolution. Though over time Brazil has made the dish it's own. These days stroganoff in Brazil is typically served next to rice with shoestring potatoes on top. My mom used to make a great beef stroganoff with the scraps of the holiday beef tenderloin so it's one of those dishes I consider comfort food. I tried the beef stroganoff from Recanto this past winter and it really hit the spot. Small chunks of steak stir fried and mixed into in a rich mushroom gravy with the aforementioned shoestring potatoes lending some much needed crunch. Very comforting stuff. 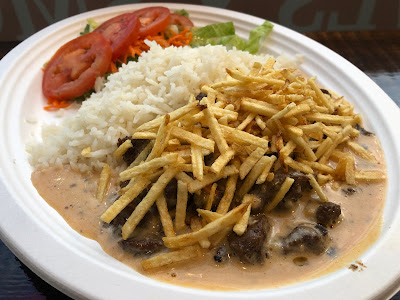 Now You Can Easily Get Medications About Different Symptoms From Branded And Registered Company Named Pharmacy Store Online.

Get The Best Articles About Several Disorders Like ADHD, Anxiety, Hair Loss, Pain, Insomnia, Obesity, Muscle Relaxant, Acne, Erectile Dysfunction And Malaria And Many More Through Our Website.

25,000 US Dollars was transferred into my account within 24hours, all thanks to darkwebonlinehackers@gmail.com