In case you couldn't tell from reading - a majority of my meals out are either some sort of Asian food or Mexican. I like Italian food, I like Greek food, and I like French food too. But as far as the European countries go I don't get constant craves for those cuisines like I do Chinese or Mexican food. Times have changed and the days of French food being mainstream are a thing of the past. There's still a nice number of French restaurants in town but the glory days are long behind us. I wasn't even around back then but if you spent time in Chicago during the 70's you probably visited a popular French restaurant. I actually did get a little taste of that era as I'm good friends with the son of Bernard Le Coq of Lincoln Park's Cafe Bernard (RIP). So we ate the restaurant a few times back when. Chicagoan's interested in the history of French food in Chicago should check out this amazing site. Today we're going to visit one of the cities old school French restaurant survivors in Bucktown. 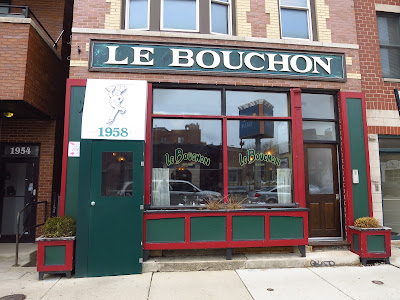 Le Bouchon opened in 1993. So while it's not exactly from the golden era of the 70's it's old enough to where it still has that classic French restaurant feel. Newer hip French restaurants will try to recreate that atmosphere at a mostly unsuccessful rate. Part of the reason Le Bouchon has that classic feel is the restaurants founding father, the late Chef Jean-Claude Poilevey closed his popular restaurant Jean Claude the same year he opened Le Bouchon. These days it's run by his son Chef Oliver Poilevey who hasn't really messed with anything as far as what made it a neighborhood staple. The menus feature classic French plates for both lunch and dinner. I actually prefer lunch for the fact it's reminiscent of many of the cafes we've visited in Lyon during the daytime hours. Le Bouchon thrives on the fact it's menu is super consistent to where it's pretty much all good so just order what sounds like something you'd enjoy. For me that's a simple but perfectly executed Lyonaisse Salad which must have the real French lardon as they do here. Le Bouchon's pate stuffed with pistachios is second in the city only to my uncles. My favorite plate at Le Bouchon is one that goes on and off the menu but it's a French breakfast plate consisting of both Toulouse sausage and blood sausage served with egg, sauerkraut, baked beans, and toast. One of the best breakfast plates in the city. Anyways with all the constant coverage of new openings let us not forget about the all time classics. 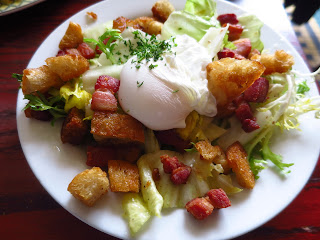 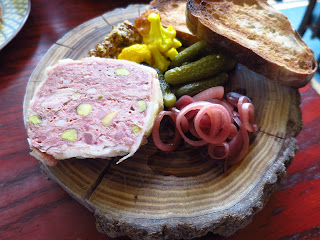 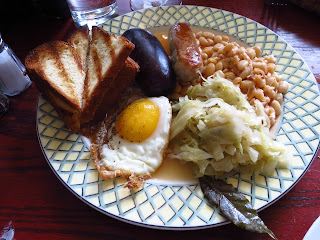 At least 160 000 women and men are trying a simple and secret "liquids hack" to drop 2lbs every night in their sleep.

It's scientific and works all the time.

This is how you can do it yourself:

2) Proceed to use this strange HACK

and become 2lbs lighter in the morning!

Wow is good to be back with my ex again, thank you Dr Ekpen for the help, I just want to let you know that is reading this post in case you are having issues with your lover and is leading to divorce and you don’t want the divorce, Dr Ekpen is the answer to your problem. Or you are already divorce and you still want him/her contact Dr Ekpen the spell caster now on (ekpentemple@gmail.com) and you will be clad you did

A GREAT SPELL CASTER (DR. EMU) THAT HELP ME BRING BACK MY EX GIRLFRIEND.
Am so happy to testify about a great spell caster that helped me when all hope was lost for me to unite with my ex-girlfriend that I love so much. I had a girlfriend that love me so much but something terrible happen to our relationship one afternoon when her friend that was always trying to get to me was trying to force me to make love to her just because she was been jealous of her friend that i was dating and on the scene my girlfriend just walk in and she thought we had something special doing together, i tried to explain things to her that her friend always do this whenever she is not with me and i always refuse her but i never told her because i did not want the both of them to be enemies to each other but she never believed me. She broke up with me and I tried times without numbers to make her believe me but she never believed me until one day i heard about the DR. EMU and I emailed him and he replied to me so kindly and helped me get back my lovely relationship that was already gone for two months.
Email him at: Emutemple@gmail.com
Website: http://emutemple.website2.me/
Call or Whats-app him: +2347012841542