I was weary of this new Indian Fast Food concept that recently opened in Lincoln Park underneath a Depaul dorm. Basically it was the looks, that of a fast food franchise, as well as the location that made me hesitant to care about it's opening. But its also right across the street from my gym and I had heard good things on Instagram which may or may not have been sponsored. Either way my hesitancy turned into a willingness to try the place out which I did so recently. 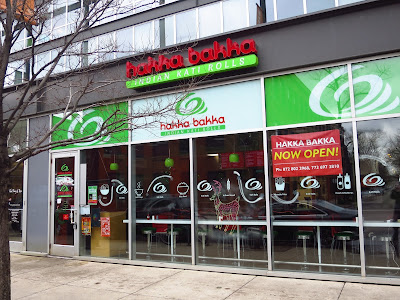 To be the next Chipotle is something many food spots are trying to complete. You can basically find a Chipotle like concept in every mall across America these days. Hakka Bakka is no different. In fact it's basically an Indian version of Chipotle with Kati rolls replacing burritos. 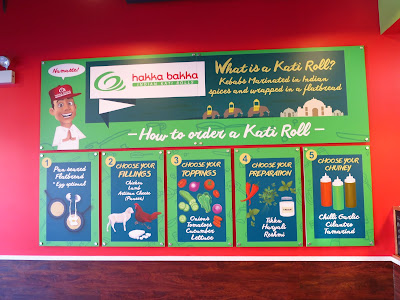 The Menu on the Wall Inside

So what exactly is a Kati Roll? Well it's a popular form of street food in Kolkata, India. It consists of diced meat, many places use kabob, thats heavily spiced and wrapped in flatbread made on site and then pan seared. The filling options consist of a few differently spiced lamb and chicken meats as well as paneer for vegetarians. In classic Chipotle like concept they also offer bowls. On my visit in I went for the Lamb Hariyali which is diced leg of lamb seasoned heavily in a cilantro and mint paste. Other options include Tikka (red) and also Reshmi (white). Standard fillings are onion and cucumber and it's rec'd that you try all three sauces inside which is what I did. 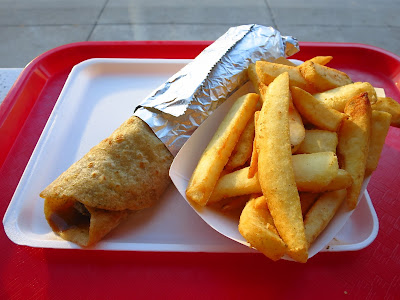 I must admit to being very surprised as to how much I liked this quick treat. I don't eat tons of Indian food so I dont know if it's vanilla compared to the good stuff but it did bring a patch of sweat to my forehead which I very much enjoyed. This was much better than Chipotle in my mind. Is it the best Indian food you'll ever have? Doubtful but it did have lots of different flavors and was indeed satisfying on my stop in. As far as the frozen masala fries go, the spicing is one way to make them a little less boring. All in all this is a much better option for Depaul students than Jimmy John's, Chipotle etc and I can see myself stopping in here and there as it's quick and near. 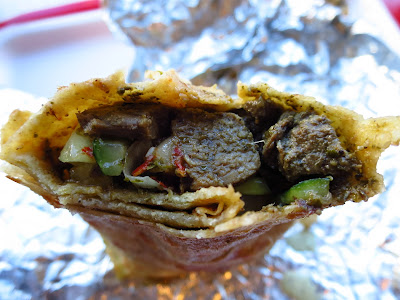