I spent one of the last weekends of Summer in Wisco doing some heavy eating and drinking, 'Sconnie style. It had been over a year since my last visit (a year too many...) to Madison so we would spend Saturday in my old stomping grounds walking around the Capitol. Sunday it was off to Spring Green for the night as we explored and ate the Rolling Hills of Green County, WI. I'll post my fun finds from that portion of our trip as the days go by as well as some other bites and drinks we had from Madison in a future thread. In the meantime I wanted to share three fancy "upper class" burgers from the Cap City in this thread here. Badgers might of lost their BCS title hopes but Madison's world famous rowdy Halloween still awaits and these burger spots will always be around town. 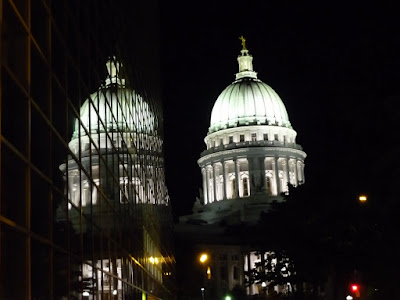 The first stop upon arrival was an old favorite of mine in the hippie part of town. I always lived on or right off State Street when I was in school but I was lucky enough to have a car and know about the Weary Traveler Freehouse. One of the best places in Madison to kill a hangover with food and more booze it's a great little spot that plays the "buy fresh, buy local"game and their menu reflects that. 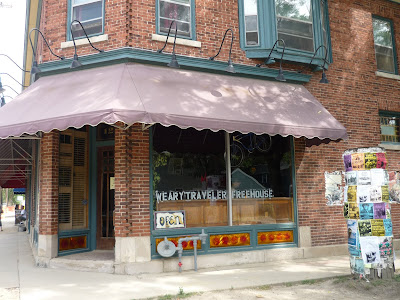 a longtime residents of Madison favorite located on Willy Street
This part of Williamson street where the Weary is located has alot of Phish-heads that have formed a pond in the area. There's quite a few hipsters and hippies around and the business' reflect that, Weary Traveler included. It's got that "I rode here on my funny bike to play my ukulele vibe inside". On any given day you may find a grungy artfart guy who came to Madison in the 70's and never left in there enjoying a coffee while some struggling "musician" is there using the free WIFI. Then there might be a few college kids at the bar drinking beers while a couple of families enjoy food at their table on an early afternoon. On the weekends they have a brunch menu including some nice morning mixed drinks, so I started my day in Madison the only way I remember how to. The view from inside...and we're off!
A Bloody Traveler for me with a few Spotted Cows from the tap to follow and some mimosas for her. My usual go to eat from here back when was the "West of the Andes" steak sandwich served in egg-wich form since I liked going here on the weekends during brunch. But they also have what I remembered to be one bad ass burger. 'Bob's Bad Breath Burger' as it is called comes with a half pound of hand-packed fresh ground Lange Farms organic beef with cream cheese, green goddess dressing, caramelized onions, garlic, tomatoes and Pickapeppa Sauce. Served with a side of Yukon Gold potatoes and mixed greens it's one of the best "fancy burgers" your ever going to find. Bob could easily hang and hustle on Kuma's Corner if he wanted to. I call it upper class because the pricetag is double digits, but the lowest it can be at $10 makes it a steal. 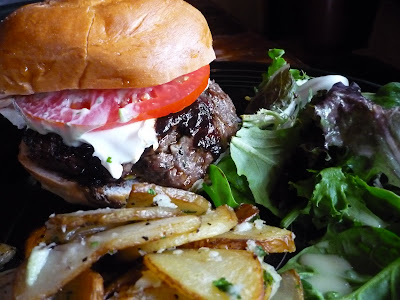 Saturday we continued on and hit up some great spots for both food and drink. Madison is a great place for both. The original plan was to stop in at the old favorite Tornado Room Steakhouse for dinner. Maybe their signature bone in tenderloin or since it was a Saturday, the prime rib maybe was what I was thinking. However a somewhat new spot opened up, The Old Sugar Distillery and it's a must visit for any drinkie. More on that in a future post. They only serve the dinner menu at Tornado until 10p but they also have a late night menu available until 1a. We went over to the Great Dane for some brews and headed to Tornado around Midnight. 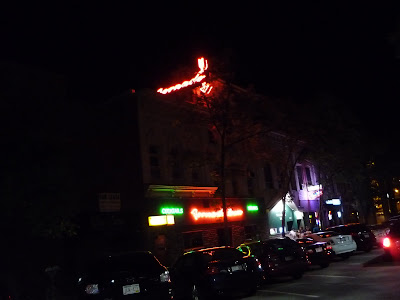 The Tornado is a classic Midwestern steakhouse as far as looks and feel. But it's also in Madison so the clientele can be anyone from college kids to local businessmen and politicians alike. There's also the Corral Room located downstairs which is an underground nightspot with live music on the weekends. They serve some great steaks and mix excellent cocktails here and it's always packed up until close on the weekends. 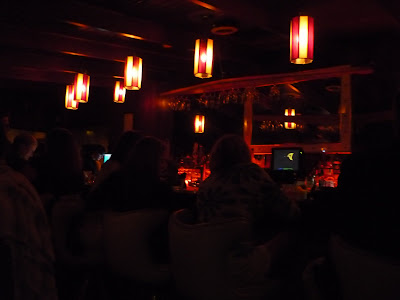 The view from inside

The steaks are great and they do all the WI supper club traditions of a Friday Fish Fry, Saturday Prime Rib and Sunday night chicken dinner too. The late nite menu includes a few things and since I was hungry and hadn't ate in a few hours I said screw it and went all out. Started out with their excellent French onion soup and also got the sirloin steak with an onion ring on top ($13), the steak sandwich with aus jus and horseradish cream ($10) and for the sake of this series of posts I also got the Bacon bleu cheeseburger. 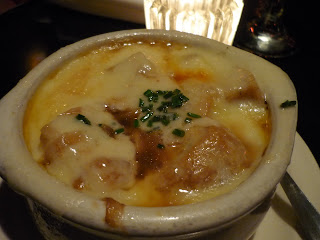 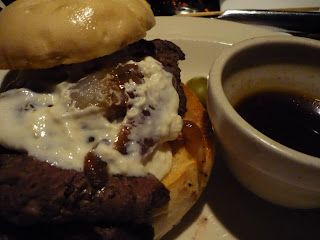 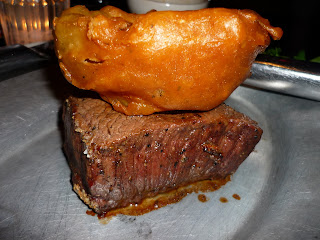 Late Nite Eats at Tornado Room Steakhouse
The sirloin was very tasty, the steak sandwich aint what it used to be and the burger? Hot Damn! What's that old saying about college? If I only knew then, what I know now? 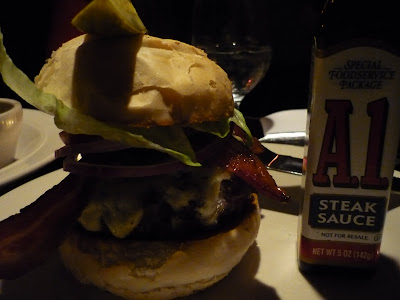 This is what a steakhouse burger should be. A fresh 1/2 pound patty of local farm raised beef cooked to a perfect red on the inside with crispy Bacon, bleu cheese, lettuce, tomato, raw purple onion and some special sauce. No sesame seed bun needed, as is the case with most places in state the bun was fresh and great. Fries and onion rings are available on the late menu as baskets but do not come with the burgers. Either way at $9 you wont regret trying one. 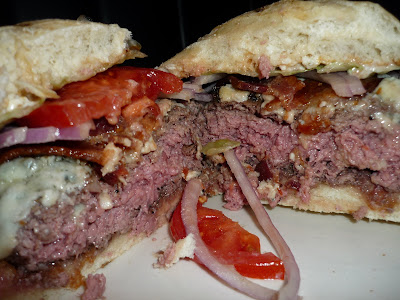 The Old Fashioned has been on my radar since I first read about "a bar that was shaping itself after the 1000's of Taverns in the state. It's been mentioned that may might open locations in Milwaukee and Chicago but as of now those remain an idea. Think an upscale (but not too classy) tavern with an amazing menu selection that reflects the states popular eats and of course great beers on tap too. 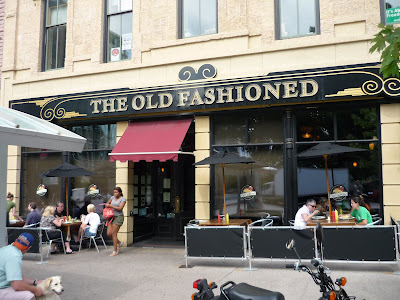 Downtown on the Capitol Square

The Old Fashioned took the concept restaurant and nailed it. Aimed to take after the 100's and 1000's of popular state wide supper clubs and taverns they did a great job making me feel like I was "in state" and all I kept saying to my friend is how much I would have loved this spot and been there when I lived around town. They have over 150 WI brewed beers including 30 of them on tap. The drink it's named after has its own page on the menu that allows you to build your own Old Fashioned. As they mix you one up the way you like from their selections in each category offered. 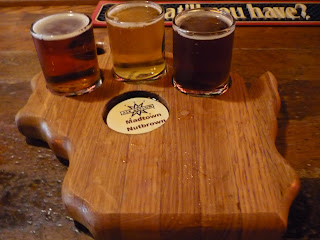 Wisconsin Beer Sampler
We actually stopped in here for drinks on Saturday afternoon and then returned for brunch and more booze Sunday. Since the brunch menu was no longer being served Saturday we came back for that and went with the highly rec'd cheese curds as well as the Wisconsin Benedict which comes with a Miesfelds brat patty and of course, the house burger. The curds were the real deal, "best I've had" in fact. The brats Benedict was awesome. They take the authentic thing serious to the point where they grill their meats over real charcoal just like many of the places around state do. The smoke flavor in the patty was pretty damn tasty with the hollandaise and everything else added into the mix. Wisconsin Cuisine
The burger was really stellar as well. For the most part everything is local and from instate as far as the ingredients, hell even the beef jerky bar snack foods come from local suppliers. The house burger is grilled over a live fire, topped with fried onions, Bavaria's hickory-smoked bacon, aged Cheddar, garlic sauce and a soft-cooked egg on a buttered and toasted roll. The ingredients were fresh and the burger was great but all I could think about was how next time I'm going to have to order a "combo" Sheboygan style and have them add a brat patty onto the burger as well. Great stop, the atmosphere was on and it's very reasonable too, for drinks and food. The burger was $9.95 with a $1 upcharge for the popular around the state onion strings included. Get those too. Cant wait to back back to Madison, it's only been about a month but that's already too long. See ya soon Mad City. 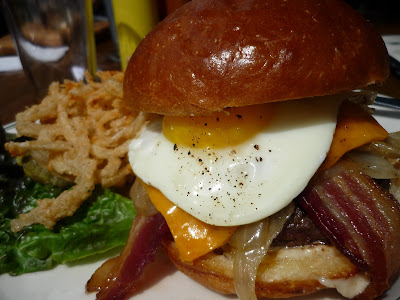