Sarkis come's to the City

In case you haven't heard the news by now-the Evanston breakfast institution Sarkis is opening up here in Lincoln Park. Sarks in the Park as it will be called will be in the downstairs corridor at 444 W. Fullerton pkwy at the corner of Fullerton and Clark st. The original location located on Gross Point rd. in Evanston is a place I have been going to since Sarkis himself ran the joint. You might remember that everything on the menu was five bucks, no matter what. It wasn't run like your normal IHOP. I would always get pretty much the same thing but the price always varied. 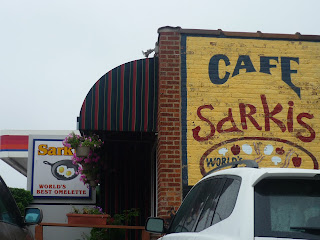 a familiar sign to any suburbanite and even some city folk

Sarkis has been going strong for over 40 years now and if you go or went to high school at Loyola, New Trier, ETHS or anywhere in the Northshore then you probably spent a few Saturday and Sunday mornings eating at Sarkis and soaking up the beer and soco lime shots from the big keg party the night before. The joint was sold by Sarkis-a character if there ever was one-a little while back but the food and clientele remain the same. 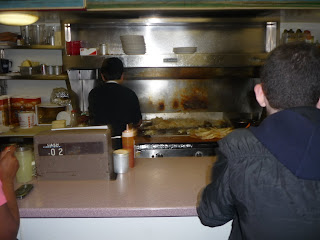 The flattop is always loaded with food

I got to be there when the character himself was cuddling up cozy with the HS girls and speaking loud enough to be heard over a dining room crowded full of teenagers. The reason its always crowded is because they pump out a mean breakfast that can only be eaten when one is ready to lay down and do nothing with the rest of their morning. Sometimes you feel like Sarkis, sometimes you don't. Although the sign boasts the worlds best omelettes-which quite a few people order-the signature items at this grease cafe are the sandwiches. The Loretta sandwich is a six-inch loaf of French bread split down the middle buttered, toasted. You then have choice of meat (ham, bacon, sausage), melted cheese and cubed peppers, onions, and tomatoes sprinkled with some house spice. One of the finest breakfast sandwiches in Chicagoland and now Chicago. 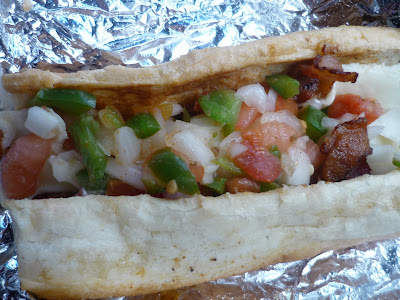 You can make it a disaster sandwich by using the popular disaster sausage as your meat. Its heavily spiced Armenian flat-bar style sausage that is quite good but not as spicy as I remember. It comes available as a disaster plate-with eggs and hash browns-or in a sandwich. Its pretty much a 50/50 split decision as far as what I order between the two. 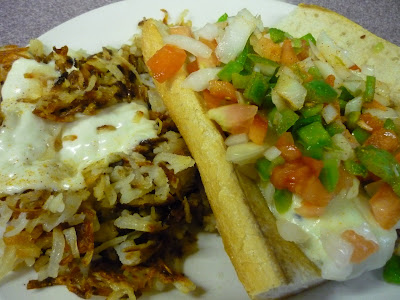 Its not too often you'll get into the small dining area and be able to sit comfortably due to the fact its actually a place where kids in the suburbs hang out...I know. However I must say that since its the same food and it was one of my favorite dining destinations when I traveled to HS from the city to the suburbs back in the day. It was one of the very few things that made it worth going out there. The sandwiches are offered with hash browns which are mediocre at best. You can enhance the flavor like I do by adding cheese and soaking them up in hot sauce. I have yet to find any other place on the globe that makes anything like a Loretta sandwich. Sarki made it an institution with his love him or hate him type personality but the food was always good and it still is. It makes sense they would open a location in LP since everyone that went to HS or grew up in the Northshore is now a young urban professional in Lincoln Park. You can read more about the venture here.

I WAS one of those teenage high school girls - making/serving coffee AND CHANGING RECORDS ON THE TURNTABLE while cutting out on school just to earn my mushroom omelette (I was a veg then). Brings back memories. I wish them good luck in Lincoln Park, - but Sarki throwing eggs around the Evanston joint was a memory that will not be duplicated!

Actually sarkis has nothing to do with the new location it says so on ther door.