I got to try David Burke's dry aged burger during its $5 debut during late October and thought so-so of it. First thing I need to note is that the burger was brought back to me, I didn't eat it there. I dont think my opinion would of changed much regardless. Also the small patty complaint below could be due to the fact that were on special at just five dollars and if thats the case well they should of let it be known. Now that the special is over they are $15/each. I see a future visit from the Miller High life delivery dude in their future.

David Burke's is one of the best steakhouses in the city of the steakhouse. They specialize in dry aged meats that melt on your tongue. The dry aged bone-in ribeye is the best piece of meat in the city. I cant say the same for their new burger. 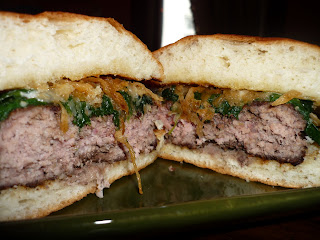 I thought it was a little dry and hey, that kind of makes sense but it was also cooked pretty well done. Im not sure if they are feeding off the baconaisse craze at the moment but I really liked the combo of the house made bacon mayonnaise and perfectly grilled onions and spinach but thought that the roll was too big compared to the patty. Too much bun not enough beef is a big no-no in my burger quest. I much, much prefer when the patty is larger than the bun and not vice versa especially to this extent. I understand that DB's is adding a little flair to the menu for lunch and that burgers will always be in demand but this wasn't nearly as appetizing as their steaks.

The truth of the matter is that if it was always $5 I would def. recommend that and a drink for lunch. But the only time I'm going to pay $15 for a burger is going to be when I am stuck in the middle of nowhere and craving something like TAB, Paradise Pup or Top Notch. Then ill have one fed-ex'd.

What can I say I'm a burger purist. I love the places that do burgers and maybe a few other things and thats it. The ones that specialize in grease and stick to what they've been doing for years. David Burke's does steak and they do that really well, best in the city...they should stick to that. Now if they ground up the dry aged ribeye into burger meat then they might have something going. 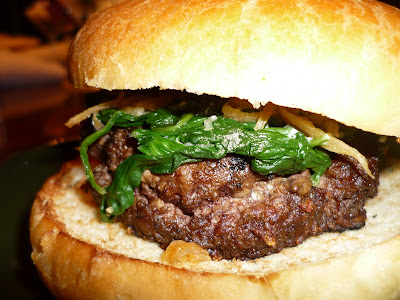 Strengths: Well I like bacon..no wait, I love bacon.

Weakness: The dry aging process does not work as well with hamburgers as it does steak. It was rather dry and not nearly as juicy as a good burger should be. Price is all out of whack for a hamburger.

Really miss the bbq food in Chicago, now that I am California. Great blog!