-Grubbing in Chicago
Where the locals eat & KingT's Wing Fling

Buffalo, New York is the birthplace of buffalo wing's and the city that made the wing thee thing of bar food. Over here in Chicago chicken wings come in all variety's and not just buffalo. I will bring you the best spots around town to consume all sorts of different variations of chicken wings. The most well known name in fried chicken is KFC and Colonel Sanders' original recipe. In Chicago Colonel Sanders is just that...a colonel. The King of fried chicken is Harold's chicken shack, another Chicago original. The 44th president of the United States, Barack Obama is a huge Harold's chicken fan. 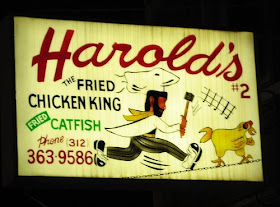 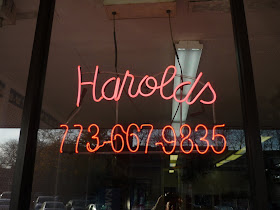 Harold's is a Chicago institution from the south side that is known for its perfectly made fried chicken and for the unique experience of eating at a real deal shack, which is what most of them are. You see not one Harold's is the same, even though they all have the same great fried chicken other stuff varies from store to store. Harold wanted each of his franchises to stamp their own personality on each store so that they didn't all fit the same mold. One thing thats common at all the Harold's I have been to is the bulletproof glass between you and the server. The genius of Harold's developed out of the fact that the larger fast food chains tended to avoid African American neighborhoods back in his day. Harold's became a player on the south side in 1950 and hasn't looked back since. Harold's has the best fried wings in Chicago and once you pop one you really cant stop. Simply amazing. 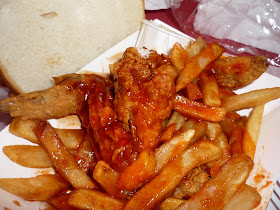 Warning: Clicking pic will cause you to drool: Harold's perfectly fried wings with hot and mild

What makes this place so good? well aside from the love Harold had for his place they use a combination to fry the chicken in half beef tallow and half vegetable oil as opposed to just veggie oil. Chicago style fried chicken is a gangload of hot sauce and mild BBQ sauce poured over the chicken and fries with a piece or two of white bread to pick at with and keep your fingers clean or make a sandwich out of with some chicken and skin. DonBarzinini will tell you that the Harold's chicken on 53rd in Hyde Park, basically in Barack Obamas backyard is the best shack in the city. Over the years Harold's has grown from a mom and pop chicken shack on Chicago's south side into a small chain with spots all over Chicagoland and locations in Detroit, Milwaukee, Minneapolis and Dallas. The product does vary at each location so share with me your go to Harold's in the comments section. Thanks. 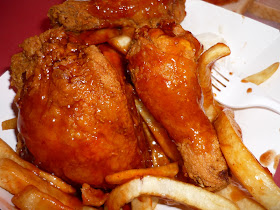 Overheard at Harold's on 53rd "Y'all need to put a little Amen spot in the corner up here, cause after we taste this chicken, we need to go talk to Jesus." No Joke its that good (Pictured: 1/2 Dark meal)

Just like Mike Mills brought Bill Clinton ribs on Air Force One, I think we will be hearing about Harold Pierce's son delivering President Obama with some wings one day while he is in office. The crave will be too much for him to resist and he'll put in a call for some Chicago style chicken from the oval office to kill that crave.

From abcnews via an interview on 60 minutes: Obama and the future first lady Michelle Obama talked about their looming life in the bubble of the White House with CBS' "60 Minutes" over the weekend. They looked back at where they came from, including such highlights as Obama's old Chicago bachelor pad near Harold's Chicken Shack.

"That was a dump," Michelle Obama recalled.

"Oh come on, it wasn't that bad, I lived right next door to Harolds" Barack Obama